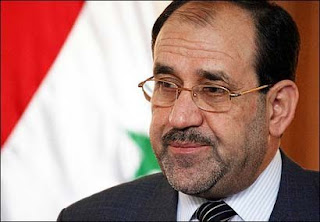 Iraqi parliament passed a law on Saturday intended to prevent Prime Minister Nuri al-Maliki from seeking a third term. Maliki’s coalition in Parliament boycotted the vote. The parliamentary move came in the aftermath of anti-Maliki street protests that turned violent on Friday in Falluja.

An official close to Maliki called it unconstitutional and vowed to appeal to the federal courts, which in practice bend to Mr. Maliki’s will.

“We are not worried about the vote on this law,” said Sami al-Askari, a lawmaker from Mr. Maliki’s coalition.“ (It will) not see the light of day.” (New York Times, 26 January)

Maliki began his second term as prime minister after inconclusive elections in 2010. The next election is to be held in 2014.
Photo credit: Iraqi Prime Minister Nuri al-Maliki (Google News)
Posted by Nader Uskowi at 8:23 PM