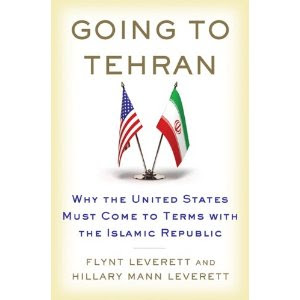 The much anticipated book by Flynt and Hillary Mann Leverett "Going to Tehran: Why the United States Must Come to Terms with the Islamic Republic of Iran" is now available for purchase through Amazon.

From the Amazon book description:


An eye-opening argument for a new approach to Iran, from two of America's most informed and influential Middle East experts Less than a decade after Washington endorsed a fraudulent case for invading Iraq, similarly misinformed and politically motivated claims are pushing America toward war with Iran. Today the stakes are even higher: such a war could break the back of America's strained superpower status. Challenging the daily clamor of U.S. saber rattling, Flynt and Hillary Mann Leverett argue that America should renounce thirty years of failed strategy and engage with Iran—just as Nixon revolutionized U.S. foreign policy by going to Beijing and realigning relations with China.

Former analysts in both the Bush and Clinton administrations, the Leveretts offer a uniquely informed account of Iran as it actually is today, not as many have caricatured it or wished it to be. They show that Iran's political order is not on the verge of collapse, that most Iranians still support the Islamic Republic, and that Iran's regional influence makes it critical to progress in the Middle East. Drawing on years of research and access to high-level officials, Going to Tehran explains how Iran sees the world and why its approach to foreign policy is hardly the irrational behavior of a rogue nation.

A bold call for new thinking, the Leveretts' indispensable work makes it clear that America must "go to Tehran" if it is to avert strategic catastrophe.

The Leverett's have a solid record of reliability with their many analyses on the subject of Iran. This writer wholeheartedly agrees with their U.S. policy advocacy of peace and rapprochement towards the Islamic Republic of Iran, using the Nixon-to-China historical precedent as a model. Look to Uskowi on Iran for an upcoming book review of "Going to Tehran', coming soon.
Posted by Mark Pyruz at 9:32 AM

So you think the Leverett's have a solid reliability with their many so called analyses on the subject of Iran?

Obviously you seem to be one of the many tools of the mafia clerical theocracy.

As the saying goes, "If you can't beat them, join them." It takes too long for the world's most arrogant, boastful and bully superpower nation of the U.S.'s years of empty 'barkings' against the so-called 'The Lion of Persia', the most sovereign state in the whole region of the Middle East. It has just entered its 34th anniversary. Indeed, that's what IRAN is.

You're the only one "barking" here pal.

Pyruz doesn't really think that the Leveretts are influential (if he thinks).

They are not AT ALL respected in the US...and only a donkey's butt would quote the book's jacket as if that crud is anything other than advertising.

it won't see 40 unless it surrenders the nuclear weapons program

But (President) Uskowi has insisted (in the old blog,)that Iran must come to terms with the US....