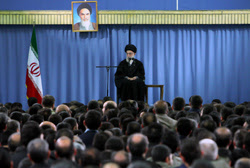 Iran’s Supreme Leader Ayatollah Ali Khamenei on Wednesday told a gathering of officials and personnel of the Military Intelligence Services that the Green Movement led by former Islamic Republic premier Mir Hossein Mousavi during the 2009 disputed presidential election was a watershed event that was led by Iran’s foreign opponents and their “mercenaries” inside the country.
“In the events of the year 1388 (2009), the enemy thought that his ten-year plan against the Islamic Republic had achieved the desired result. But the Iranian people entered the arena with strength and slapped their international opponents - let alone the mercenaries inside the country who are not considered important compared to the greatness of the Iranian nation - across the face,” Khamenei said.

Khamenei said that the upcoming presidential election, scheduled for 14 June, will show the strength of the Islamic Republic.

“On the 22nd of Bahman (14 June), the Iranian people will, once more, show their strength, dynamism and understanding to people throughout the world,” he said.

Nader, in the speech did he actually state "Mir Hossein Mousavi" and "the Green Movement"? Your rendering of the speech implies that it does. I didn't find those names used in the reporting at Khamenei.ir. Could you cite a transcript of the speech, please. That would be helpful.

Khamenei has not mentioned Mousavi or Karroubi's names since the 2009 elections. (He just keeps them under house arrest.) He refers to the movement surrounding the 2009 election as Sedition ("Fetneh') or here as the event of the Year 1388 (2009), as the quotation above shows. I did not put Green Movement or Mousavi in quotation mark, you did!

Usual anti-Iran spin and misinterpretation of Khamenei's speech. Anyway, this June not a mouse will squeak as most Iranians have seen through the US/Zionist destabilization agenda and its consequences in Syria, Iraq, Egypt, Lebanon and now Africa. The export of US "democratic violence" is not acceptable to the majority of Iranians. Even in Syria today according to western pools, US sponsored terror campaigns have only made President Assad more popular. In Iran there is now widespread revulsion to US sanctions, economic pressure and covert terrorism. The June elections will be a watershed mark in Iranian stability and peaceful democratic hybrid political process. The "greens' were really greenhorns and did not understand Iranian socio-political dynamics, just like the self-hating foreign based exiles who have now been bleating for 34 impotent years. Iran will move on as the dogs keep barking at the caravan.

Apparently they (Mousavi and Karoubi) had couple choices of places where they could reside (under an "house arrest" by yours descriptions...)

-YOU ARE FAILING in your journalist duty if you cook words to score some goals!.
-MIND YOU USKOWI YOU HOLD A high moral ground HERE !!,why then do you bring yourself down with this unwarranted negative reporting!.-JUST TOO SAD TO A PERSON OF YOUR STANDING!!.

We are reporting on what the supreme leader said regarding the experience of 2009 election and the upcoming June election. What part of the report is negative? Please be specific.

Nader, I will answer your question.

By virtue of deduction, your interpenetration is correct.

Sometimes the younger generation who grow up in the western world forget how things are done back home.

In his speech, an umbrella approach was taken. The leaders (past) and other leaders (soon to be), better protect the establishment or they would not be considered part of it, which makes them anti-iran and anti-islam.

Ultimately, he is warning about future unrest and is setting the penalty for falling out of line.

Also, keep up the good work Nader, and please feel free to share your thoughts and insight. These previous comments were made by some guys, whom on this occasion, have missed the forest for the trees! :)