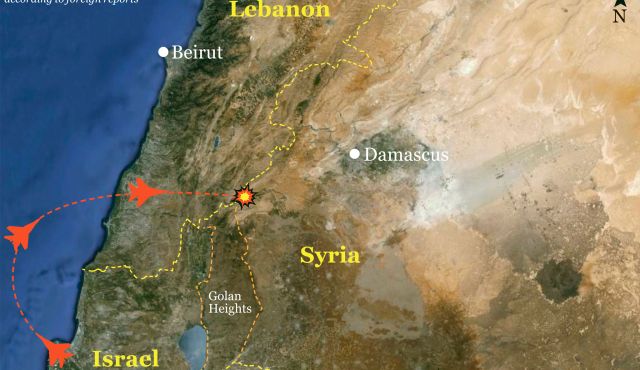 The commander of the Israel Air Force, Major General Amir Eshel, on Tuesday issued warning over the volatility of Syria and its weapons. Eshel described Syria as a “country falling apart.”
“Nobody has any idea right now what is going to happen in Syria on the day after, and how the country is going to look. This [crisis] is happening in a place with a huge weapons arsenal, some of which are new and advanced, and some of which are not conventional,” said Gen. Eshel. (Haaretz, 30 January)
Image credit: The map of area where Israeli air force attacked a convoy reportedly carrying anti-aircraft missiles. (Haaretz)
Posted by Nader Uskowi at 11:32 AM

Hopefully that convoy contained a number of Hezbollah scumbags.

I think it is safe to say,they were caught with their trousers down,LOL !

Another act of terrorism by the Israeli regime.

Now the question would be : why didn't the Syrian air defense forces and its air branch, react as swiftly and decisively in that engagement as they did for the Turkish F4 fighter sent a few months back to probe local air defenses. Is Assad's fear of the IDF that solid and unshakable, no matter the context ?

The strikes seems to have occurred close to a sensitive scientific research sites, and there is no way in hell it wasn't defended by some serious anti-air defenses.

Once more, i thank God I'm not Syrian... would it be for the civil war going on and tearing apart the nation from the inside, or those regular humiliations it suffers at the hands of the Israeli military machine, and that without ever showing even a glimpse of an intention to respond in any real way. How frustrating that must be to the average Syrian, even if they certainly have other more pressing concerns right now.

The huge eavesdropping center sitting at the top of the Golan Heights would be such an easy target for the Syrian air force in a retaliative action... fear of escalation, Bashar ? what's wrong, you can't even trust your own people to take the right side in the event of a full-blown conflict with your neighbor ?

it was an act of war.... learn the difference,friend.

Which will not be responded in kind, hence the act to begin with, like many others before it.

Lets see if those cretins in Tehran will respond or are they just the usual hot air.

I think as long as Israeli threats against Iran remain hot air, Iran's bluster about taking on Israel will remain as such. In this "game", we win at least the absence of another major conflict in the ME. Personally, I'm fine with that empty barking on both sides if it avoids such outcome. We do NOT need an Israeli-Iranian war in that already messed-up region, do we ?

yes, it IS an act of war. did you not know that Syria is still at war with Israel?

I'd rather say it's the other war around dude, ISRAEL is still at war with SYRIA, since it is ISRAEL that STILL holds Syrian territory in the Golan Heights, including its strategically important water reserves and cultivable land, and not the opposite. And yesterday again, Isral attacked Syria, and not the other way around. But you seem to put the blame on Syrians for that too, in fact i wonder when does Israel finally becomes guilty of something for you ?