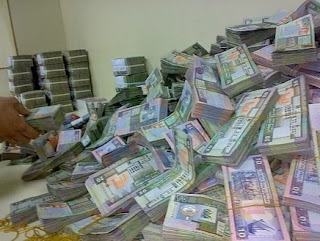 Kuwait Investment Authority (KIA) has accumulated assets worth  $261 billion for its ‘Future Generations Fund,’ meant to provide for future generations in a country where more than half of nationals are under 25, Kuwait’s al-Qabas newspaper reported on Sunday. (Reuters, 13 January)

Kuwait puts a percentage of its annual oil revenues into the Future Generations Fund. In September 2010, Kuwait decided to increase its contribution to the fund to 25 percent of its total oil revenues, up from 10 percent previously.

The Future Generations Fund does not include the country’s substantial foreign currency reserves, which is known as General Reserve Fund, also managed by KIA.

File photo: Kuwaiti currency, the dinar (Al-Arabiya)
Posted by Nader Uskowi at 11:38 AM

And all the funds in Iran has gone to the hidden imam.

INVEST IN EDUCATION INSTEAD!-instead of engaging in a political gimmick to hide the looting committed by the Royals,Kuwait should instead build universities ,colleges and other vital institutions.another thing, open the country and engage in openness in managing the country.MAYBE borrow a leaf from IRAN,DESPITE THE envy by the cruel West with their sanctions, IRAN HAS A BRIGHT FUTURE!!.

Kuwait was one of the major financiers of Saddam during his war with Iran. This while the Iranian state was poring everything it had into defending the nation. Such is your blinding hatred and cultural degeneration that you rather praise Kuwait than pass on an opportunity to mock the Iranian leadership. I am myself not a proponent of any form of governance based on Islam, but you people have no shame in you whatsoever.

there was no praise for Kuwait in this short report. perhaps you should have noticed that before posting your comment.

possibly a glowing one.

What are you jabbering about man? No one needs to mock the un-Iranian leadership,because they mock themselves on a daily bases in front of the whole world.
Cultural degeneration is caused by the Islamic regime when young Iranian girls are being sold off to the UAE and Qatar.When woman are treated as third class citizens.When grown woman needs permission from men to get passports to travel.When children are burnt alive in their school because of primitive heating systems,while the monies are given away to Syria and Palestinians.When there is mass unemployment due to closure of factories so that IRGC bandits could import from China to make more profit for themselves.
People have no jobs and are struggling to put bread on table while the "leadership" grows fat from stealing and oppressing the people.
Looks like you have no shame whatsoever.

I just can't understand why it is so difficult for everyone to understand.

This article in it entirety says one thing:

I know its a hard a pill to swallow...but that is what happened and is happening.

And also, not all of that money was made during the iran-iraq war. They got screwed by Saddam back, but they managed to survive and put away $261 billion for their future generation.

At least we destroy Kuwait in football.

1st point: If you had read history properly and had cared about learning the real facts then you would have understood that the town which you Iranians falsely call Khoramshahr used to be an Iraqi city before the Ottoman empire conquered and occupied Iraq. The original name of the city was Mohammara.

2nd point: Did you know that Saddam sent friendly and positive messages to the newly established revolutionary regime when they came to power in Iran. He did not think of them as adversaries or even enemies yet, in the beginning days of the revolution. He actually was serious about setting up ties with the clerics/mullahs. He even congratulated them on their success and gave them his best wishes! Instead of accepting his outreach for mutual friendship, what did the mullahs do, they started to interfer in Iraqi internal affairs.

They had a hostile attitude towards Iraq right from the start, and only wanted to realize their own malicious plans. Funding Shi'ite political parties and their militias. Ordering Shi'ites to carry out sabotage and planting bombs in various places. The worst was the assasination attempt on the Iraqi foreign minister, Tariq Aziz.

3rd point: You claim to be against this theocratical mullah regime that has imprisoned the population inside Iran. Did you know that Saddam's main goal with invading Iran was to depose Khomeini and his henchmen, and open up the opportunity for other moderate political entities to seize control, because they did exist and were supressed immediatly after Khomeini arrived.

His intent with the attack on Iran was not to take over all of Iran and put occupational forces everywhere, but his mission was a just and noble one, namely to force the tyrannical and dangerous religious lunatics to the negotiating table with the purpose of forcing them to cede what was once the territory of Iraq, and the Shatt Al Arab (which is the original name, meaning "the river of the Arabs"), and not the fake name Karun.


So in conclusion his two main objectives were logical and righteous, and that was the reason why he recieved help from many different countries, while almost nobody sided with Khomeini (see above reasons)

Iraq is an artificial country created by the British.
Iran on the other hand has a history of well over 2600 years.
It has been called ALVAND RUD for 2600 years you dopy twit.
You know what you can do with your "Shatt Al Arab"?
That's right you guessed it!