The Need to ‘Save the Country’ - Rezaie 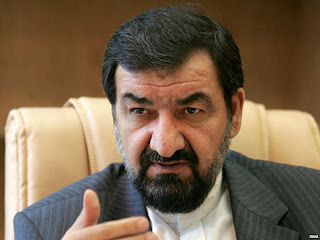 Mohsen Rezaie, former IRGC commander, 2009 presidential candidate and publisher of the popular news site Baztab, said in an interview with Mosalas magazine that a politician outside the old hardliner and reformist political factions is needed to run in the June 2013 presidential election to “save the country.” Rezaie said that both hardliners and reformists are on the “verge of collapse.”
“If I become president, I will definitely try to bring all capable and committed forces into the government in order to put the country’s current situation behind us,” said Mirzaie. (Baztab, 13 January)
“Iran’s political factions, operating under the names of hardliners and reformists, have not been able to establish an stable and lasting (political) system in the past 20 years and are on the verge of collapse. They cannot help the people, it’s actually them that need the help,” Rezaie added.
“Iranian society is ripe for a social movement focusing on economic and cultural issues. The society is eagerly awaiting the return of ethics, honesty and loyalty, and families are in need of better life and normalcy.
“Today, lack of stability reigns in the markets… and the youths is suffering from unemployment and lack of livelihood. From ethical point of view, lack of ethics and honesty is prevalent everywhere.
“The upcoming (presidential) election, like the 2005 election, will be multi-factional and competitive. Otherwise people would think that the competition was a formality and staged. I believe that turning this election into a formality will undermine the religious-based democracy.”
File photo: Mohsen Rezaie (ISNA)
Posted by Nader Uskowi at 2:08 PM

Who are the candidates? They want to release their name two weeks before the election and have a healthy election? I doubt if they can be honest; because they have to make tough decisions and change their way fundamentally; do they want to embrace the modern world or fight it? Do they want to continue to identify themselves with Islam ahead of Iran - or the other way around ? The Regime is defeated by the reality inside and outside of Iran; now they have to embrace the change instead of sloganeering it away as if their audiences were stupid - and not they themselves who are responsible for bankrupting the country

Mirzaei is THE man! Affarin!

The regime knows it is finished,therefore to save Iran the whole regime has to step down and face justice for their anti human and anti Iranian crimes.
If the regime doesn't voluntarily step down and relinquish power,then they must face the consequence and wrath of the people.
As simple as that.The rest is just play acting by the regime and their stooges to keep the Iranian people busy into thinking things will change if you "vote" for this or that charlatan.But in reality nothing will change until these vermin are removed from power once and for all.

No doubt you're one of the paid mozdors to cheer scum like him on.
You don't fool anyone here pal.

Maybe they should identify themselves with Zoroastrians or Jews who are opposing the Islamic Republic.
Maybe Shaul Mofaz or Nader Uskowi could bring the right order.

Sloganeering instead of Understanding - how original ....

As I stated before, although these sanctions are hurting the Iranian citizen more so then the Iranian politicians during there daily lives, it is also slowly breaking down the Iranian Government within. And clearly it is working beautifully. We all know Israel and the US cannot go into a physical war against Iran, as Iran is no Iraq or Afghanistan. However the war has started in a new way, a way that is being done by sanctions and world wide political pressure to weaken the government. It is working folks, it's all about timing. And the time is closer then one expects.

Not as mad as people like you who are so gullible to fall for the mullahs tricks :0

True Z. The people must realize that the mullahs and their regime are the main cause of all our present problems.Once they have been removed by the people then we can concentrate on rebuilding Iran into a modern country again.

seems you have taken ONE TOO MANY!!!!

B.M.A,you seem to be like a bad lingering smell refusing to go away!