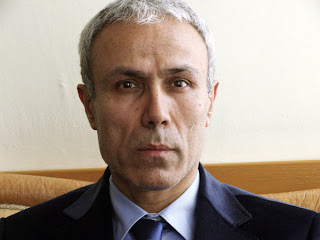 Mehmet Ali Agca, the Turkish gunman who shot Pope John Paul II, now claims that Iran's late leader Ayatollah Ruhollah Khomeini personally told him to kill the pope. In his new autobiography, "They Promised Me Paradise" – which was released in Italy today, Agca claims that he was trained in Iran by Iranian intelligence after escaping from a Turkish prison, and that the Iranian leader himself told him to kill John Paul in the name of God. (AP, 31 January)

Agca shot and wounded John Paul on May 13, 1981, in St. Peter's Square. Minutes after being arrested, Agca claimed he had acted alone. Later he changed his story and suggested that the Soviet and Bulgarian intelligence were behind the attack, but later backed away from that assertion. The Pope pardoned Agca and he was released from prison in 2010.

who would believe that a cute, cuddly ball of shirtwaist such as little Ruhollah would consider such a thing?

Honestly, Nader, this fellow is known to be mentally incompetent. It's one of the reasons Pope John Paul forgave him.

True. But the Pope was also kind and Christ-like.

duh! YOU mean Christ was much forgiving and merciful than other Prophets?

So has somebody cooked another "pretext" against Islamic Republic ?

If Agca is still in prison, so maybe "someone" offered a deal to him to be realesed earlier.

There might be some similiarities with the Arbabsiar case .... who also accused the Islamic Republic...

I am really beginning to doubt your grasp of the realities: The Pope is Christian, hence the use of the phrase Christ-like to described his kindness. Should I have compared him to Buddha?

I don't believe what Agca is saying, just reporting it. But the Islamic Republic doesn't need someone to cook a "pretext" for them, they are very capable of doing that themselves, rest assured.

---- " duh! YOU mean Christ was much forgiving and merciful than other Prophets? "---

one would have to indeed take the word of Agca or Khomeini to be anything close to truth without ample supporting evidence.

neither man stands for honesty or decency.

Naam ! Mr Nader-the correct phrase should be "Christian like" and not -'Christ like'-since the latter goes to the person[CHRIST HIMSELF]-well sorry if that is how you frame it in that part of the world!!.

No. Pope aint like Christ. if he aint born again, he aint a christian.