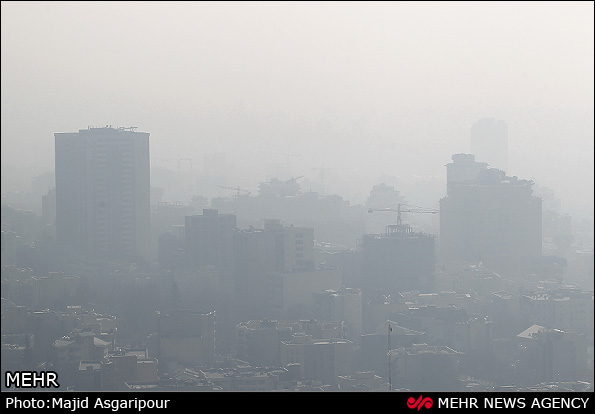 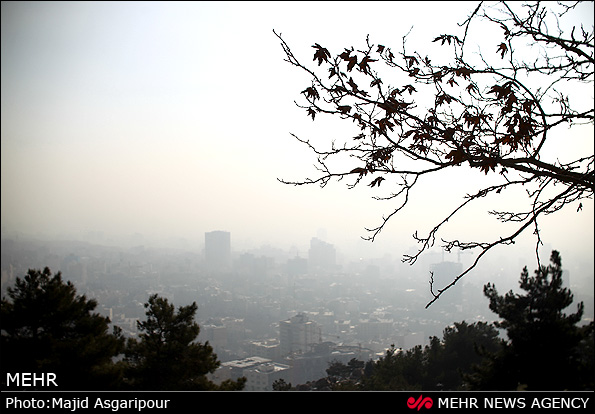 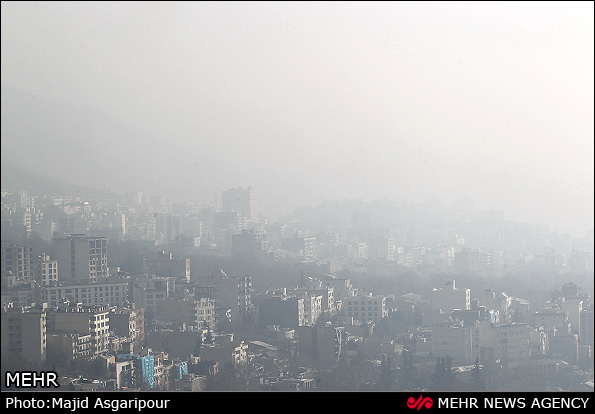 The level of pollution in Tehran has reached a dangerous level. Witnesses describe it as shocking (jrezaian/WashPost/Twitter). The local radio is asking the Tehranis to stay home, saying going outside in the current conditions is suicide. All government buildings and schools are closed. The poor quality of domestically produced gasoline is said to be the major culprit.

Interesting to see in the Tehran skyline a construction boom operating in the building of a skyscraper during times of "crippling" sanctions.

I wonder how that the western countries can cause this on other nations?

Bread 30000 rials,meat 50000 rials per kilo.Factories are running at 25 percent.Factories closing because importing is cheaper and more profitable for regime.Workers not being paid for months if ever.Over 40 percent unemployment and rising.Black market economy run be the mafia IRGC.
Most of those large construction projects are run by the IRGC for money laundering and corruption.
Only two types of business left in Iran,construction,imports and both are controlled by corrupt IRGC,Khamenei,Mojtaba and Rafsanjani.
All that you see is an illusion.

point out that there are perfectly good pieces of nutmeat undigested in the middle of the turd.

keep your spirits up and happy recycling !

the westerners caused this by cruelly forcing the Iranian regime to rely on the regime's engineering skills for refining oil into gasoline.

It is due time Iran set aside manpower & funds, and started to utilize the contacts it has with other nations through the use of foreign service agents & diplomats for the procurement of more efficient industrial equipment & tools which processes petroleum into different kinds of fuel & gasoline. That is what has to be done in the near term to relieve the current pollution crisis. It is an effort that must definitely be moved up on the list of priorities, and it is one that need to be backed up by the implementation of new long-term plan that consist of a domestic effort to come up with more modern indigenous technologies that can replace the older machines that manufacture fuel & gasoline, this is of utmost importance as the country moves into the future. The people responsible for the making of fuel & gasoline have to take the neccessary steps to come up with new processing techniques for the sake of delivering fuel & gasoline that is both more cost effective to produce & considerably less polluting for the population.

Hey Mark! You must be one of those rich mullah boys that lives in the West?
Stop pretending that we don't know and take a trip down to Iran and see what a hopeless dump these akhoonds have turned Iran into.

Ha Ha Ha!! The terrorist theocracy is to busy setting aside funds for Arab terrorist organizations so that they can resist "Zionism".
As long as this fascist clerical regime lives on the Iranian people will be third rate citizens of the country.

This is a serious problem for Iran, and should be taken seriously by all. Iran's ministry of health today announced that air pollution was directly responsible for the death of 4,460 in Tehran last year. (Mehr news, http://www.mehrnews.com/fa/newsdetail.aspx?NewsID=1783975).

you tell us how it's going to get better any time soon without shedding the blood of an Ayatollah or two.

I believe many should learn to speak, the internet has a leaning towards the meaningless and aggressive... Hell, this degenerated quickly. @7:54 ; he's got at least one article about his trips to Iran you should read it before you insult him about it...
The fact remains that good gasoline does not seem to be sufficient. Natural gas infrastructures aren't built up enough either.. and what @5:39 said. What is the electrical grid connected to?

Hello comrade....we must support the current leadership in Iran at all costs, I truly believe that they only want the best for the Iranian people!!! I have ordered new refineries to be quickly built here in mother Russia to help Iran with this smog problem!!! Although the people of Iran will have to pay the same rate as my friends in the Eurolands....LOL!!!! Do not wory about buying the low emission cars that the rest of the world has.....this will not solve your problems.....Russia's new Diesel and Petro blends is all that you will need, we just need the prices that people in Iran will have to pay us to rise a bit more.....perhaps my great friends & comrades that make-up Irans current leadership can sign long term contracts now...this will help expedite the entire process.....don't worry, I don't think there will be any price gouging by us here in Russia and if the prices for these new fuels are too high maybe your government can give the people a stipend to help out!!!

We the great peoples of Russia & Iran must constantly be on guard of other nations who are trying to cause problems in the oil & fuels production arena, just look at what the House of Saud is trying to do!!! (We must always remain vigallant and stop these kind of projects....hope Iran can cause many problems in the Kingdom!!) see this link:


Well me Iranian friends I must go now....I'm taking a trip to the Gulag to visit some old friends later today....LOL!!!

P.S.
Remember Iran's smog problem may have some upside......maybe the evil Israeli & American & Nato spy drones who fly over your country everyday will not be able to see their targets!!!! Oh BTW, did I mention that we in Russia now have some amazing new spy drone technology for sale??? We are also looking for paying customers for our new spy drone tracker & attacker weapons systems.....Iran should think about buying these systems too!!!

If the Iranian regime orders this drone technology....and pays in advance....do you promise to wait a few years before announcing that you won't be delivering it and not refunding the cash?

Will you include some more sales brochures of the S300?

I read some of his articles pal,and he shows a extreme leaning towards the mullah theocracy.
And I don't need to be told lies by a person that has had "trips" to my country.
And before you jump on your high horse,@2:14 AM ; you've also a tendency to be rude to people on the internet.

indeed.. sorry for the offense... yet the thread seemed well endowed into it.. I'm merely pointing out that a post about air pollution and a reply about a construction boom(artificial or not) visible in the post's image had quickly escalated to: you ***-loving and ###-sucker kinda one-liner exchange.