Turkey Will Not Participate In Military Action Against Iran – FM Spokesman 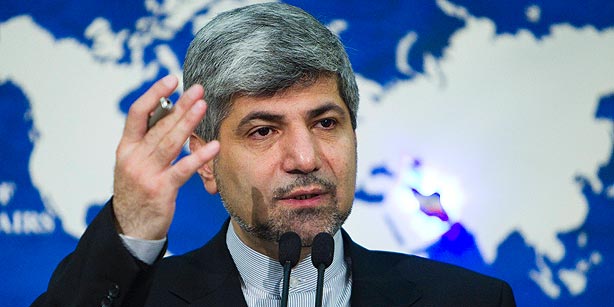 Iran’s foreign ministry spokesman Ramin Mehmanparast said in an interview with al-Manar TV on Sunday that Turkey has assured Iran that it will not participate in any military action against the Islamic Republic. Mehamparast added that Turkey will not allow its airspace to be used for any attack on Iran.

On the deployment of Patriot missiles on Turkish soil, Mehmanparast said the deployments were for protection of Israel, and not Turkey.

“Iran believes that Western countries and NATO have deployed the system in Turkey with the aim of supporting the Zionist regime so that in case of an Israeli military venture against Iran and Iran responding to such a measure, Western countries can safeguard Israel with the help of the missile system,” Mehmanparast said. (Today’s Zaman, 6 January)

the ludicrous contention that short-range anti-missile defenses in Turkey is to protect israel is just the sort of blatant lie and desperate nonsense that the Iranian regime features.


an attack on Iran will not have need of Turkish troops or airspace.

there are numerous available alternatives.

"the ludicrous contention that short-range anti-missile defenses in Turkey is to protect israel is just the sort of blatant lie and desperate nonsense that the Iranian regime features."

You have offered no reasoning, no rationale behind your comment, no nothing to back up your accusations. There's nothing in your comment that could disprove Mr Ramin's claim, hence it is infact your statement that makes no sense at all.

What Mr Ramin stated actually does make sense. You only need to examine the operational history of the Patriot SAMs. The coalition deployed them during the 2nd Gulf War in 1990-91 to knock out Scud missiles fired by Iraq towards Kuwait and Saudi Arabia. Sometimes it worked, other times it didn't for various reasons and the Scud made it through.

Wasn't "Mr" Ramin the one that took a good hiding in New York last year outside the UN building by the angry Iranian demonstrators?

Mehmanparast is lying and the physical distance between Turkey and Israel, about 880km, is sufficient to demonstrate that the Patriots in Turkey, with a range of about 100km CAN NOT be about protecting Israel.

he is 100% correct.no body believes turkey for a second.

to our military expert above or better word armchairs worriers.mr .mehmanparast is 100% correct.short range missiles will pour from hezbullah and hammmas and syria.by the way u.s or israel won't dare to attack iran.they can run their mouth like they have in last 10 years.hot air is cheap.iran military prowess is beyond u.s games of hit and run and call it victory.iran respond will be devastating to the world economy.

You don't know the facts, do you? You seem clueless to the fact that Iran has constructed and placed hardened & concealed silos into the mountains close to Tabriz in the northwestern part of the country, from where ballistic missiles can be launched. The missile's only possible trajectory would take it through Turkish aerospace. NATO has strategically deployed its Patriot batteries, which have been designed to deal with ballistic missiles, smack middle in the path of an oncoming ballistic missile going in a straight line to Israel. That's why the batteries were put there to render those missile silos almost useless, and neglect the Iranians at least one angle to retaliate from, and thus dampening the Iranian military response in terms of strikes by long range missiles

so you're saying that Iran would violate Turkish airspace in order to attack Israel?

and Turkey, because of that, must not have any air-defense missiles?

that's rather an insane POV.

if you think that missiles aimed at Israel that might kill a few hundred israelis might stop the US, then you haven't the faintest clue about the US.

If you think that Iran can disrupt the world economy for more than a couple of weeks, let alone devastate, you again are believing lies that you're being told.

Iran is not in position to do more than suffer should it come to war.

That's IF Assad and Hezbollah will exist into next year.

I agree with you on this.But unfortunately for those blockheads,they haven't the slightest clue what they are writing about.

It's as if they read PRESS-TV and don't realize that they're being lied to.

IF YOU THINK GENERAL "JOHN ABUZEH" CHIEF COMMANDER OF CT-COM IN IRAQ WAR LIED ABOUT IRAN FOR BEING THE MOST POWERFUL MILITARY IN THE REGION 6 YEARS AGO,OR YOU THINK SECRETARY OF DEFENSE "JOHN PENEDA" WHO SAID IN FRONT OF U.S CONGRESS, IRAN NAVY IS A FORMIDABLE FORCE AND WELL TRAINED WELL FINANCED AND WELL LUBE MACHINE TO DEFENT IRAN ARE LIARS.OR IF YOU THINK RQ-170 U.S MOST ADVANCED SPY DRONES WAS DOWNED LAST YEAR OR RECENTLY U.S SPY DRONE, SCANEAGLE WAS DOWNED OR ALL 33 U.S DRONES THAT HAVE BEEN DOWNED IN LAST TWO YEARS ARE LIES OR WHEN PRESIDENT OBAMA CHILDISHLY ASKED IRAN TO GIVE THEIR DRONES BACK IS A LIE.OR IF YOU THINK 2006 PROXY WAR BETWEEN LBEBANON AND ISRAEL,WHICH ISRAEL WAS DEFEATED FOR THE FIRST TIME IN ALL OF ITS WAR AGAINST ARABS WITH THE HELP IRAN IS A LIE,OR 2008 ISRAEL DEFEAT.OR 2012 ISRAEL DEFEAT AGAIN WITH IRANIAN MISSILES IS LIE.OR IF YOU THINK AMERICAN ENTERPRISE THINK TANK GROUP TWO MONTH AGO WHO PUBLISHED IRAN WAR CONSEQUENCES IS DEVASTATING TO GLOBAL ECONOMY AND PREDICTED FOR FIRST 90 DAYS IT WILL COST U.S OVER 3 TRILLIONS DOLLARS(WHICH I BELIEVE THEY HAVE LOWBALLD THE COST FROM THEIR ARROGANCE POINT OF VIEW)BUT HOWEVER THEY ADMITTED IT MAY BE AROUND 7 BILLIONS TOGETHER WITH NO POSITIVE RESULTS FOR OUTCOME.IF YOU THINK ISRAEL WHO CAN'T FIGHT HAMMAS NOT MORE THAN 8 DAYS AND ACCEPT HAMMAS CEASE FIRE P[LAN FOR THE FIRST TIME IN HISTORY OF THEIR WARS IS A LIE.IRAN MILITARY PROWESS IS BEYOND ZIONIST OR ITS MASTER IMAGINATIONS.LETS HOPE FOR THE SAKE OF HUMANITY THAT NEVER HAPPENS,BUT IF IT HAPPENS IRAN RESPONSE IS WELL BEYOND ONES IMAGINATIONS AND CALCULATION.THATS WHY THEY RUN THEIR MOUTH ,BECAUSE TALK IS CHEAP.SO, I HOPE ALL THE LIES THAT YOU ARE READING HERE????,GIVE YOU SOME PERSPECTIVE AND START BELIEVE IN YOUR COUNTRY MILITARY POWER,UNLESS YOU ARE NOT AN IRANIAN WHICH IN THIS CASE I HAVE NOTHING TO SAY FURTHER TO YOU.GOOD LUCK WHOM EVER YOU ARE.

That's exactly it. Turkey do not need to bother about it. They honestly shouldn't even have to worry about the potential of missiles flying through the skies over its territory -- those ballistic missiles do not pose any danger to them. Turkey is not the target.

The problem is that Turkish leaders is about to sacrifice the peace & tranquility of its own population. Turkey has now chosed to be at risk of getting dragged into a wider full scale war by allowing NATO to install Patriot SAMs' on their ground.

This idea, which must surely have been created by Israel & the US, is not meant to serve as benefit to Turkey at all, but to save Israel. Israel is getting covered & shielded at the expense of Turkey's stability. It's incredibly foolish to bend over to the will Israel & US & take orders from above. They have put themselves in a risky situation. Turkey is running the risk of becoming entangled in a broader regional conventional war, that is when they lock on & shoot down Iranian missiles fired against Israel.

The concensus inside Turkey is one of rejection to the plans of deploying Patriot SAMs' on their soil. The vast majority of the Turkish people oppose Erdogan's clumsy decision. Now they are idioticaly setting themselves up to get involved in a war with Iran.