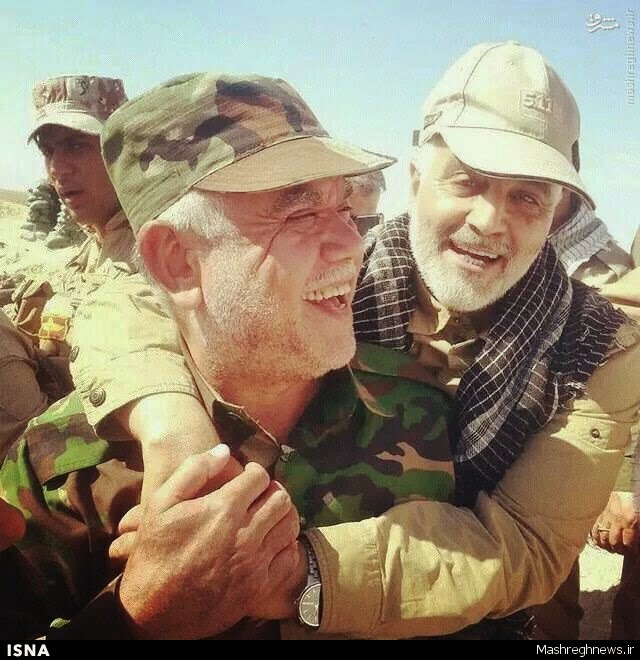 Hadi al-Amiri, the leader of Badr Organization and a key Iran operative in Iraq, today harshly criticized what he called “weaklings” at senior ranks of the Iraqi military for their call for U.S.-led coalition airstrikes against ISIL positions in Tikrit.

“Some of the weaklings in the army say we need Americans, while we say we do not need the Americans,” Amiri told reporters at Camp Ashraf, north of Baghdad. (AFP, 22 March)

Iraqi Lt. Gen. Abdulwahab al-Saadi, a senior field commander at Tikrit, had told AFP that he had requested U.S.-led coalition airstrikes against ISIL as they were needed to win the battle in a more efficient and less costly manner. The Pentagon said it has received no requests by the Iraqi government to launch airstrikes at Tikrit, AFP reported.

Although the Battle of Tikrit began under the command of Quds Force Gen. Qasem Soleimeni on 2 March, but the Iranian general has returned to Iran since the fighting came to a halt last week and it was increasingly unclear who, if any one, now has overall command of the operation, AFP reported. It was not clear when Soleimani would return to Iraq.

While Iran-led coalition forces were able to take control of towns near Tikrit, but fighting to clear ISIL insurgents from the city itself has proved to be more difficult. The Iraqi military has said the offensive is halted until the arrival of new reinforcements. There are reportedly more than 20,000 militia fighters and nearly 5,000 Iraqi troops now surrounding Tikrit, which is being defended by few hundred ISIL insurgents. When the offensive operation begins, the coalition, with its huge advantage in troop strength, should face no serious problem clearing ISIL fighters from Tikrit.

“We will not enter Tikrit until after the completion of the necessary preparations,” said Amiri. (AFP, 22 March)

Amiri did not say what types of preparations the militia and the army were working on, or why those preparations were not made before the start of the offensive.

"Amiri did not say why those preparations were not made before the start of the offensive." ==> because no plan every survives the heat of the battlefield. If in doubt have a look at what happened during Operation Overlord on June 6th, 1944, which started as a sounding defeat with massive and disproportionate losses from the allied camp, before reinforcements arrived and ultimately allowed the expeditionary force to take over German divisions through painstaking, bitter battles weeks later.

Their current advances are promising though currently halted, and by most accounts, resorting to such adaptive approach rather than rushing to their goals in search for public recognition or western media headlines is to be noted. Offensives in enemy-held territory dug in deep into dense urban environments is a hard task for any army in the world, namely the US itself in its past struggles in the Vietnamese and Iraqi theaters, which relied on massive air power to flatten entire neighborhoods before sending in ground troops, the "best" examples being Fallujah after one unsuccessful attempt at taking the city.

Shiite militias essentially took over Iraqi forces after their infamous summer debacles and now the PMC is leading the charge against one of the principal ISIL strongholds in an attempt of a scale unseen at taking on them so directly on Iraqi soil, thus witnessing such critical reaction by a PMC commander after observing what he probably perceives as yet another example of Iraqi inefficiency in battle and over-reliance on outside forces to compensate for its weaknesses is also more legitimate than not. Not saying he is being entirely fair or right, but I don't find that comment that out of place.

I think we can give them due credit within the currently successful tide of the way they handled the ongoing operation, and not rush at doubting them altogether whenever things don't go 100% smooth in one shot in a flawless way. Suleimani going back to Iran for whatever reasons shouldn't be taken as a sign of sudden, imminent collapse of a now headless, blind and inept war-fighting force. Claiming so would indeed amount to quite far-fetched affirmations in my opinion. The man and his men have done a pretty good, recognized job til now, let's not bash the whole crowd involved at the very first sign of the slightest slowdown and unforeseen difficulties arising from battlefield analysis. Let's wait and give them a chance at proving themselves. It wouldn't be the first time that a military force boasts of impending success while in fact ending up embroiled into (very) long conflicts. A good hint would be the US in Korea, Vietnam or Iraq itself for that matter. The battle of Iwo Jima is another glaring example of what it looks like for the attacking side to take over a well-defended enemy-held territory. The US went in with massive numbers and firepower and yet suffered huge losses and massive setbacks before winning through attrition alone against dug-in Japanese troops in the island.

like the rivalry between regular army and sepah pasdaran in Iraq-Iran war...distrust resulting in poor co ordination

I'm in favor of American airstrikes being called in, but unless members of the Badr organization can be kept away from the other Iraqi forces, it's probably best to avoid hitting them now.

Sad historical fact is that Arabs despite excellent Iranian strategic planning and leadership simply are too fractious and disorganized to fight. There is whole library of literature on why Arab armies simply can't fight, mostly due to the tribal culture, petty rivalries and unfortunately cowardice and over excitement in short bursts and then lose interest. No Sunni Arab (Hezbollah being the only exception to have fought off the Zionists for 33 days with head held high) army has ever fought beyond a 48 hours window. Even Saddam's $100 billion army armed by the best of Russian and Western weapons fizzled out at the Karun Rood escarpment by the 25th of September in 1980 and from then on it a war of attrition against a post revolutionary Iran at about 5% of its current military capability. Saddam invaded a revolution weakened and embargoed Iran with 4500, some of the world's best tanks and any other military hald its salt would have been in Tehran in a month considering Iran simply had no general staff officers and the defence had been led by the embryonic Sepah, Basij volunteers and junior Artesh officers. The only brilliant Egyptian Chief of Staff in history, General Saad ed Din Shazli (sacked by Sadat as he opposed the stopping of war barely 15 kms from Suez and abandoning Syria) states in his masterpiece book on Arab armies CROSSING THE SUEZ, that the illiteracy, corruption, family patronage, tribal ties and cultural superstitions are worse enemies of Arabs, no wonder 6 million Zionists have been defeating them since 1948. The Iraqis are perhaps the worst of the Arabs as they have no national identity (post WW2 imperialist creation) unlike Egypt, a 3000 year old civilization like Iran. I am afraid that the Iranians will be sucked into the Iraq vortex if not careful as the Kurds and Arabs simply don't have stomach or will to fight.

Perhaps we can catalog Amiri's reported remarks among a similar journalistic impulse that also reported strained political ties between Baghdad and Washington at the onset of the Salahadin military campaign.

another sad historical fact is that many Iranians have quite stupid and bigoted opinions concerning Arabs.

perhaps some Iranians should remember that Iran was forced, through military means, to accept an Arab religion.... and that same religion is used to oppress the Iranian people as of today.

So youre saying the akhoonds have no blame in the Creation of this mess... ? youre saying that the Akhoonds are not a huge part of the problem ...? youre saying Akhoond minions experiences from the Iraq-iran war DON'T show how miserably they perform when going on the attack on non - Iranian soil. Food for thought!

Thanks for you comments and history lessons.

I do expect the Iran-led coalition to resume offensive operation at anytime now, and with the huge advantage in the number of fighters the coalition should not face serious difficulty to clear ISIL from Tikrit.

The Iraqi army and the PMF have actually fought hard to liberate Tikrit. We should accept their explanation that the pause in the offensive operation is very temporary and could be resumed any day now. They apparently had to regroup to lower the casualty count. But the reality is that ISIL's manpower is too small to be able to defend Tikrit against the huge coalition force. If ISIL's behavior in most of the battles fought so far is an indication of their behavior here, they probably will withdraw their fighters from the city when the concerted offensive by the coalition resumes. Tikrit will be a turning point in the fight against ISIL.

you're mistaken in thinking that weeding out the few ISIK fighters in Tikrit is going to prove to be some kind of turning point.

there is no reason to think that holding the town has any importance to ISIL. all they need is space from which to threaten truck traffic from Iran through Iraq and into Syria.

Recapturing Tikrit is indeed a turning point because it tells us that an Iran-led coalition of Shia militias and ISF forces could score a major victory in a Sunni-dominated region. All the victories of this coalition so far have been in either Shia or mixed-ethnicity neighborhoods.

Tikrit was very important to ISIL, symbolically and strategically. After Mosul, they attacked Tikrit for those very reasons. The recapture of Mosul will give anti-ISIL forces, including the Kurds, space to stage their campaign to liberate Mosul.

We should not evaluate battlefield successes or failures based on our political leaning. When Tikrit fell to ISIL, no one said that it was an unimportant event. The recapture of Tikrit is as important. We need to evaluate events unfolding in this war based on the realities on the ground, not our political viewpoints.

Please keep your comments short, if you actually expect the folks to actually read them . thanks for the voluminous history comment .

I think the operation to clear Iraq from ISIL menace should be governed by the Zero principle:
Zero coalition casualty , zero civilian casualty and collateral damage , and absolutely zero number of those takfiris slipping away .. Being surrounded in Tikrit , the takfiris can do little damage elsewhere and it would serve as a significant psychological blow to takfiris in Mosul .It's paramount that every single last one of ISIL terrorists be brought to justice or otherwise accounted for .