After Two Days of U.S.-led Coalition Airstrikes against ISIL Positions 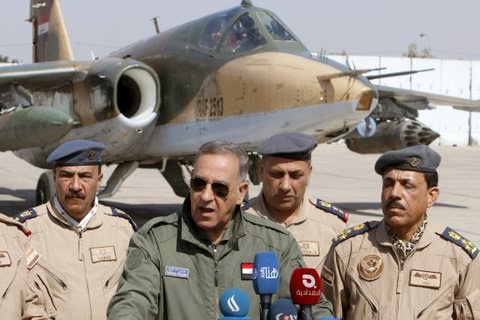 Several thousands Iraqi security forces and fighters from the Popular Mobilization Forces (PMF), composed primarily of Shia militia fighters, have resumed their offensive on the ground in Tikrit after a two-week pause, the Pentagon spokesman COL Steve Warren said today.

Three Shia militia groups, KH, AAH and Peace Brigades, have withdrawn from the battlefield in protest to U.S. airstrikes of the past 48 hours against ISIL positions in Tikrit. Pentagon said their withdrawal was welcome.

The forces that remain on the battlefield are loyal to the government of Iraq and under the direct control of Iraq’s Ministry of Defense, Warren said.

Meanwhile, U.S.-led coalition airstrikes against ISIL targets continued in the area today. They began on 25 March at the request of Iraqi Prime Minister Haider al-Abadi.

Email ThisBlogThis!Share to TwitterShare to FacebookShare to Pinterest
Labels: Battle of Tikrit

The Islamic Republic need not apply.

That was the reasn that there were no airstrikes or supplies of ammunition to the Abramses and so on.....

Iraqis and the U.S. together can win, but they need to keep the incompetent Iranians out. Maliki's biggest mistake was believing that iran would protect him against these few thousand isis rebels. Iran has always been utterly incompetent in military matters. Whether you look over 2000 years ago, 1400 years ago, or 20 years ago, you will see nothing but iran getting completely and totally crushed militarily. You would have to be a fool to believe in such a country!

Anon 6:28 AM
Iran/Persia was the only country on this planet that defeated the mighty Roman empire several times over.And since the establishment of Iran nearly 2600 years ago by Cyrus the great it still remains intact. And will continue doing so for the next millennia. So much for the utter incompetence of Iranians.

Someone needs some serious workout on their knowledge of ancient and modern history!!

Someone just needs a good doctor and after this a good history book. By the way in the last 17 years Iran is the only one that suffered no attacks despite the us puppet regimes. Poor anonymous 06:28