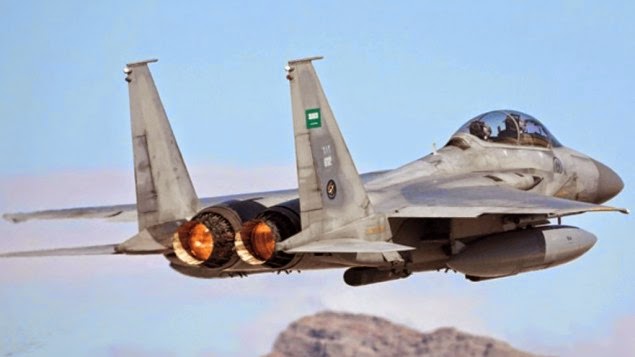 Saudi Arabia and Gulf Arab allies launched airstrikes in Yemen against Huthi (AnsarAllah) insurgents who have tightened their grip on Aden, the capital of southern Yemen.

The Saudi ambassador to Washington told reporters tonight that a 10-country coalition had joined the military operation to “protect and defend the legitimate government” of Yemeni President Hadi. (Reuters, 25 March)

The operation started at 7 p.m. EDT (2300 GMT) on Wednesday in response to a request by President Hadi to stop Huthis from complete takeover of Yemen, the Saudis said. Hadi's office released an statement saying, “This operation has restored people’s determination to fight (the Huthis).”

UPDATES:
- 30 UAE fighter jets, 15 Bahrainis, 15 Kuwaiti, and 10 Qatari are deployed for Yemen campaign as part of the Saudi-led coalition against the Huthis, Al Arabiya reported.

- Loud, house-shaking explosions could be heard in the Yemeni capital Sanaa and fire and smoke could be seen in the night sky.

- The Houthis said the Saudi-led coalition aircraft were hitting al-Duleimi military base in Sanaa. And they were firing anti-aircraft missiles in response.

- Pakistan said it was studying a Saudi request to participate in the operation.

File photo: A fighter jet of the Kingdom of Saudi Arabia (YouTube)

Quite a conflagration we're now seeing int the Middle East,

So, can the Islamic Republic also ask for a foreign help, in case of a military actions ( aggressions) against it ???

The question isvwhat would be Iran reactions and how does it affect nuclear negotiation.

They are right in Iranian trap .
Iran doesn't send military hardware there , it's Iranian idiology over there and you can't eradicate it with airstrike
Instead it flames up hate toward Saudis more and more
This people are digging their own grave
They did it before but houthi came back stronger this time won't be differ t

Yemen should strike on Saudi oil field and others to punish.

Saudi's strategy has perfectly worked in Bahrain and here they are quite sure that Iran will not directly engage in a war. Trend of developments recently hasn't been in Iran's favor. Ineffectiveness of Iraqi militias, potential loss of yemen , etc.

Ineffectiveness ???
Not sure where you get your news .. Iran is running show in Iraq , Syria , Lennon ... Iran does not want Bahrain to be cauoase otherwise it would gave been ... bahrain dies not have any strategic location ...so should not be put in danger ...
One country and too many enemy but look is stable and strong

I'd rather see it that way : Yemen is actually the only place where things haven't evolved entirely in Iran's favor and it's only fair considering they playing out of their traditional sphere of influence. And considering the IRI's boldness in fanning up the flames of instability and armed takeover through yet another proxy militia not ANY better ideologically than the pre-existing forces (bar Al-Qaeda/ISIS), its position is quite indefensible in my opinion this time around.

In Iraq they now have a 30,000 strong well equipped and ideologically motivated armed force at their disposal constituting the bulk of the anti-ISIS front acknowledged by the US itself. In Syria they have the NDF and Hezbollah whom yesterday made yet another successful push against IDF-backed Nusra forces in the Golan area, and in parallel have been progressively cutting off the last main rebel supply route to Aleppo. Still, yes there are and will be setbacks in this quest for total proxy dominance of course, but things have fared pretty well in favor of Iran so far in those two theaters, and the tide isn't about to turn in pro-Saudi/GCC forces anytime soon.

In Yemen they sure went ahead of themselves, probably emboldened by the latest regional developments that certainly gave them an illusion of all-mightiness which is so typical of the regime.Well this time they discovered the hard way last night that it isn't the case when you step into people's backyards and provoke a coalition of forces against yourself.

I wish they could understand that as quickly as possible and walk away from Yemen, ending their petty attempts at establishing a pro-IRI force right at Riyadh's doorstep and antagonizing the entire Arab League before getting embroiled in a futile, unwinnable and costly proxy war against 10 countries augmented by their superpower american patron... as if Yemen hadn't already have so many internal issues of its own beforehand...

AnonymousMarch 26, 2015 at 10:19 AM
Theres a world of difference between taking on unarmed peaceful protestors in bahrain and taking on an armed group that comprises 30% of the yemeni population,the last time the saudis took on the houthis things didnt exactly go their way,I`m sure that iran is hoping that the saudis will be so stupid as to invade,after all its very easy to step into a quagmire but far more difficult to extricate oneself from it just look at the soviets/nato in afghanistan.I have a feeling that this is going to be payback for what saudi and their gulf allies did in syria and frankly it couldnt happen to a more deserving bunch,who knows we might even be witnessing the beginning of the end of the house of saud after all it wouldnt be the first time that a country that started a war wound up being incinerated by those very same flames

The Islamic regime cow tails to arab idiology of islam by helping their "moslem brothers" the Palestinians and countries like Sudan,when in reality the arabs hate our guts and can't wait to see Irans destruction. Just like the Palestinians when they joined Saddam's Iraq during Iran/Iraq war,Sudan out of all countries that the regime helped has turned against Iran as well. When will the Iranian people realize that the regime in control in Tehran doesn't have the interest of Iranians at heart?

Iran has ensured Yemeni airforce planes are in shelters, this was the first thing Iran did when the revolution started in Yemen. Iran also immediately provided know-how on how to protect them and keep them operational. Yemen will therefore have the option to use its F-5s, Su-22, Mig-21 and Mig-29 to launch decisive attacks on Saudi Arabia. Given the range and intensity of attacks done by Saudi and its allies, it should expect Yemen to launch some sort of airstrikes towards Saudi targets, most probably areas of high impact for Saudi psyche and/or export (oil). Besides this, Yemen currently should have short-range missiles supplied by Iran which can be used against both vessels but also ground targets. These missile installations and supply lines are the main targets of Saudi attack but it is unlikely they have all been destroyed. Given the Saudi attack, it has already issued permission to the Huthis for a full-scale retaliation. As per for other states in the GCC coalition, it is most probably so that given their distance to Yemen they will not be target of any direct retaliation but rather condemned verbally.

the answer is that Iran still doesn't have an answer as to the best way to conclude the negotiations but Khamenei's preference is not to reach a deal..


the fact is that Iran's expansionism now appears to be facing seriuous challenge all across the region and that Iran can not possibly match up to Saudi money, Egyptian manpower and US weapons and intelligence.

the Saudis have a larger and more advanced air force than anything in Yemen and will be able to send fighters after anything Yemen launches ...and the Saudis will be informed immediately if any of Yemen's planes launch.

There is side effect as well which cannot be too bad for Iran. The oil price is hiking up besides the fact that any single attack by missiles or others from Yemen to KSA, will see price of oil rocketing. In addition, Iran's worst enemies (read Arabs) are involved in another internal war that will keep them occupied with US and others pushing more weapons sales to these people.

they can ask, but who wants to help them?

It would really kick their ass....