Badr and its contention over U.S. and Iran supplied tanks to Iraq 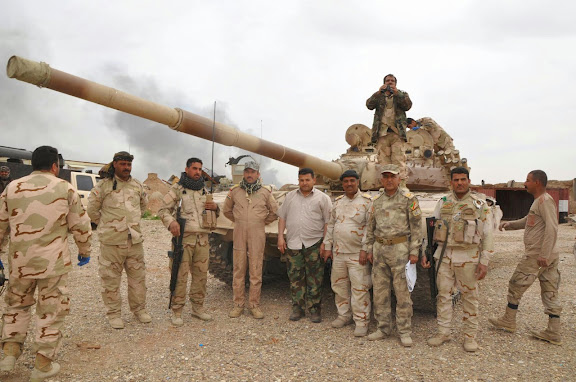 More photos materialized depicting an Iran-supplied T-72S tank thought to be sourced from IRGC-GF stocks; this time near Samarra, Iraq. Featured in the above photo is Badr official Qassem al-Araji, in short-sleeve shirt and woodland BDU.

This follows comments made by President of Badr Organization and Iraqi Minister of Transportation Hadi al-Amiri, published 13MAR15 at Iran's Tasnim News Agency, where Amiri criticized what he contends were "irrational conditions" by the United States on weapons and tanks he asserts the U.S. agreed to supply to Iraq, stating "America has a condition that these weapons are not to be used in the Salahaddin battle and can only be used in the [proposed] Battle of Mosul." [see HERE]

COMMENTARY: This Iraq/Iran narrative of U.S. withholding of "weapons and tanks" appears to be a possible motive for the recent photographic publicity of Iran-supplied T-72 tanks making appearances at sensitive sites about Iraq, however low-key that may be. This also fits the familiar pattern where the Iraqis are able to turn to Iran, wherever they feel their needs are not being upheld by the United States, or they feel undue influence.

For Iran's part, they appear only too keen to accommodate such needs, portraying theirs as the more reliable coalition against ISIL and Al-Qaeda linked groups.

Whether such regionally constituted contrivances revolving about U.S. or Iran supplied tanks translate into meaningful tactical renderings on the Iraqi battlefield has yet to be observed.
Posted by Mark Pyruz at 8:04 AM