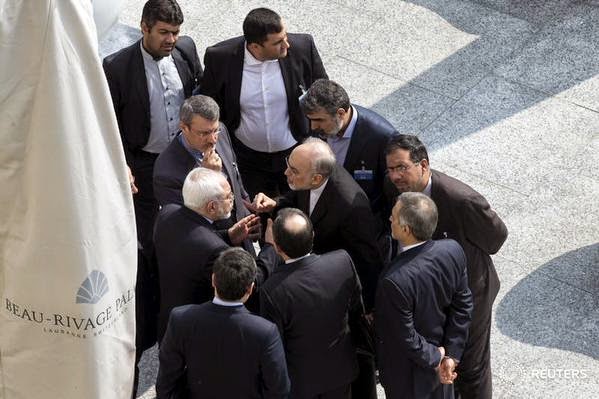 - The French and German foreign ministers will arrive in Lausanne on Friday, and the British foreign secretary is expected to arrive on Saturday. They will join Secretary of State John Kerry who has been in Lausanne in the past four days negotiating with the Iranian team.

- The Iranian delegation, headed by the Iranian FM, will remain in Lausanne through the Iranian New Year, which will be observed at 11:45 P.M. on Friday local Swiss time.

- There were no explanations given by Kerry’s team, or the EU, of why the three EU ministers were asked to join Kerry at the talks, and if their presence there were a positive sign.

- There were no indications as of yet that the Russian and Chinese FMs are joining the talks as well.

- Iranian and American delegations will resume meetings at 9:30 Friday morning.


Photo credit: Iran’s Foreign Minister Javad Zarif, center on left, and nuclear chief Ali Akbar Salehi, center on right, during an animated argument outside the conference room along with their aides after a morning negotiation session with Secretary of State John Kerry. Lausanne, 19 March (Brian Snyder/Reuters)

I think that the nuclear chief Ali A. Salehi has better knowledge of matters and negotiations....... to assure proper deal.