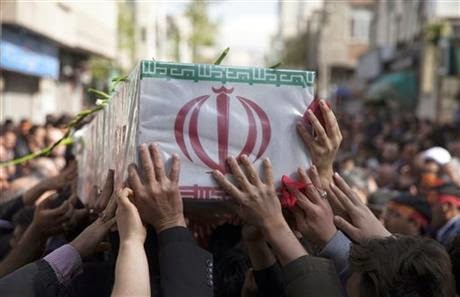 IRGC says a U.S. drone strike killed two of its advisers near Tikrit, where a major offensive is underway against ISIL, but the U.S. said today its coalition conducted no airstrikes in the area during the time of the incident.

U.S. Central Command said it didn’t target the area around Tikrit from 22 to 24 March, the window when the IRGC said the two men were killed. IRGC said on its sepahnews.ir website that the strike happened on 23 March, as the men supported Iraqi forces trying to retake Tikrit. It identified the dead advisers as Ali Yazdani and Hadi Jafari, no ranks given, saying they were buried on Sunday. (sepahnews.ir/AP)

The U.S.-led coalition began surveillance around Tikrit on 21 March at the request of the Iraqi government, and the airstrikes began the night of 25 March.

“No strikes by coalition aircraft, manned or unmanned, in the vicinity of Tikrit from 22 to 24 March,” said Col. Edward Sholtis, a spokesman for U.S. Air Force Central Command (AFCENT), the air force component of CENTCOM. (AP, 30 March)

they can try to blame the US, but the important thing is that the two are dead and the Iran government likes to try to use all opportunities to increase the hatred and suspicion.

Okay what the hell is going on? Reports have been coming all over that coalition forces are attacking Iraqi/Iranian forces in more than one place.

I personally don't believe this. It sounds more like Iranian propaganda. The Iranians are probably trying to "steal" all the victories against ISIS in which coalition airstrikes played a significant part.

where are these reports printed?

Iranian-backed militia sources, of course. This is why I don't trust the news. However, the fact that Iran is arming said militias with MANPADS means they are facing *some* kind of threat from the air.