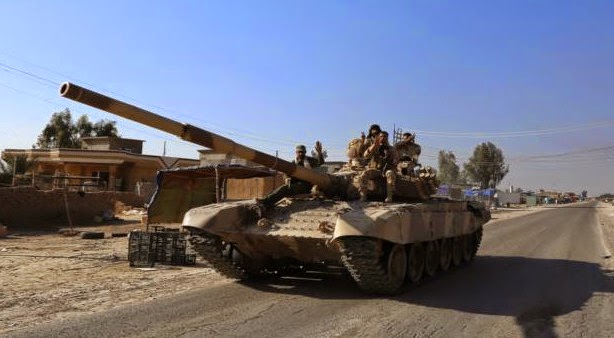 Following rumors this week of "company-sized" Iranian tank contingent taking part in the Battle of Tikrit, a Reuters photograph published today has captured imagery of what is in all likelihood an IRGC-GF supplied T-72S.

Commentary: IRGC-QF tactics developed in the Syrian theater of war make use of mixed armor and infantry in the assault role, so evidently Iranian military tacticians have seen the need in Iraq for application of armor providing direct fire support for Iran-led coalition forces.

If it is confirmed that Iraqi Shia militia forces-- such as Kata'ib Hizbullah-- are now operating Iranian-supplied T-72 main battle tanks, this implies Iranian training, and a significant increase in combat power for elements of Iran-led coalition forces waging war against ISIL and Al-Qaeda linked armed groups.
Posted by Mark Pyruz at 6:39 PM

What is badly needed now is ATGM-equipped units to spearhead the push into ISIL-held areas, or having UAVs constantly loitering overhead . It seems that the takfiri savages have been degraded and weakened to the point that use of any combined arms tactics( armor+infantry ) may not be needed at this point . I think more than T-72 tanks , medium but accurate ATGMs are needed in order to keep the anti-ISIL coalition casualties to minimum while depriving the terrorists of their still effective weapons . The Kurdish peshmegas have done a good job of using bundeswehr-supplied Milans against ISIL and boosting their own morale at the same time .