On 09MAR15 the Islamic Republic of Iran Navy (IRIN) held a ceremony at Bandar Anzali, formally inducting the IRINS Damavand frigate into service with the 4th Naval Region fleet on the Caspian Sea. 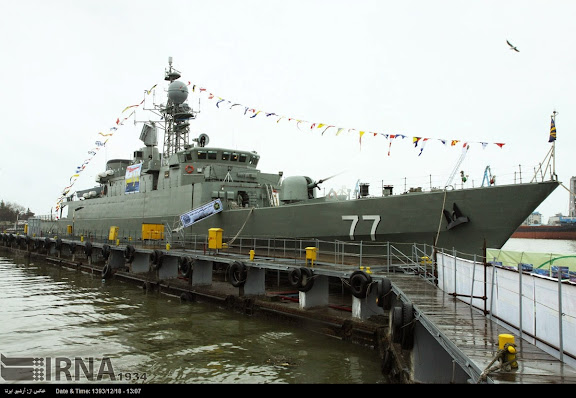 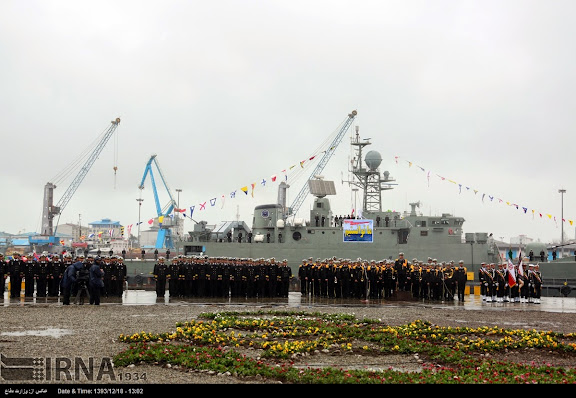 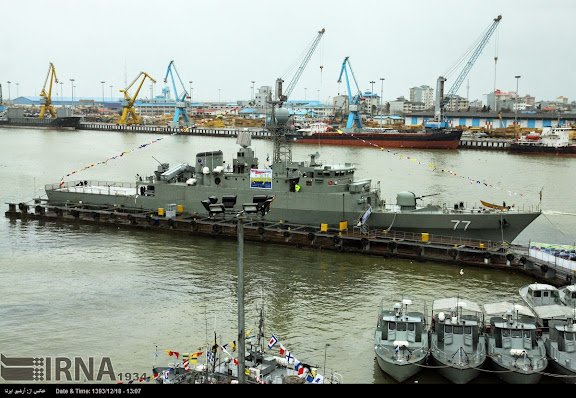 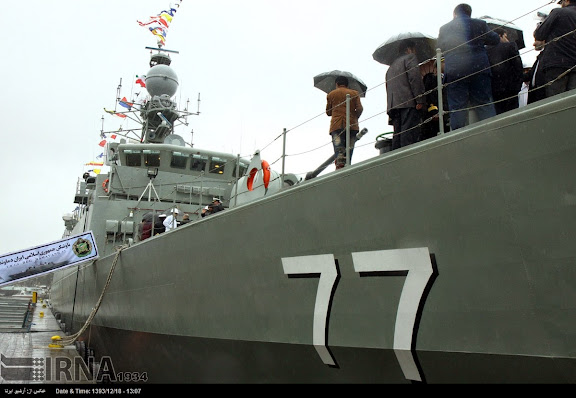 Iran considers its frigates as destroyers, going so far as to use the hull classification symbols of "DDG" as seen on the gangway banner at far left. In addition, there appears to be contradictory classification among Iranian military leaders as well as Iran media as to the class of this warship, with some references identifying the ship as Moudge class and others as Jamaran II class. 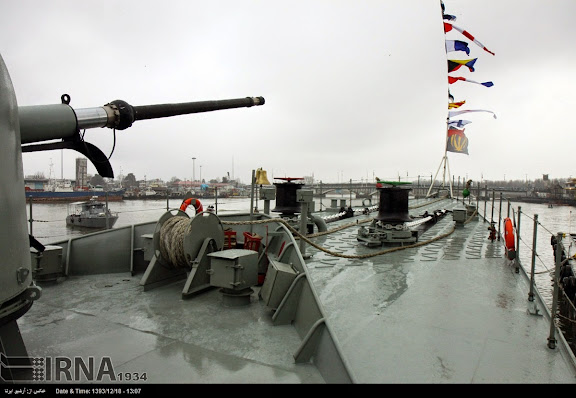 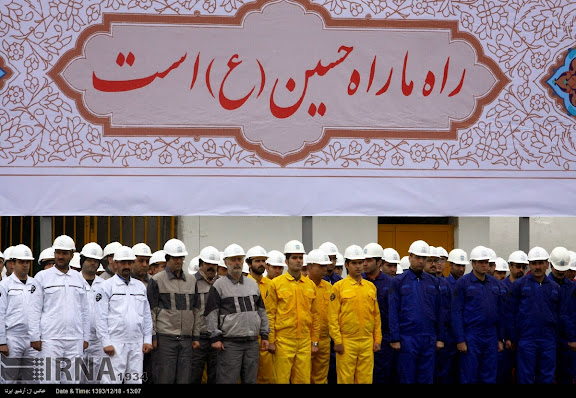 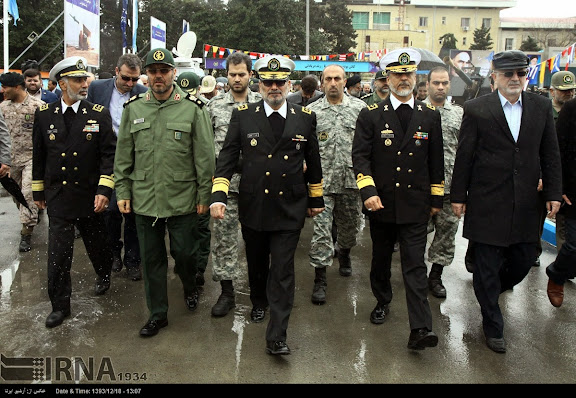 The better deployment for Damavand frigate would have been the Persian Gulf. The Caspian is a inland lake and besides Russia there are no major players that Iran can't handle with a few FAC missile boats. Iran should also be working on a Phalanx type system for close defence and installing it on all ships.

This Davamand "frigate" has only two SM-1 SAM for air-defence, a medium gun and some smaller caliber guns. No CIWS and it seems no decoy launchers. It will nto survive even a minute in a real war scenario. A good option could be to install more SSM launchers amidships and more SM-1 launchers aft and thus to increase a bit the AAW capability.

BTW, you have an excellent webpage, congrats!

Looks like you are from the ones on hand who use to disparage efforts and achievments of the Islamic Republic's scientists....
It will become the same way, like they ridiculed 10 or so years ago that couple thousands of primitive centrifuges or some "Scud" type missiles are LOL, and today those enemies are afraid not only of them but overall Iranian achievments, which include many areas including space program and drones to mention few.

Recently signed military cooperation with Russia will yield new advances for the Iranian defensive levels, and one can expect that the russian AK-630, six barrels rotary cannon. will be widely utilized on new and modernized warships of the Iranian fleet.
It can fire 10 000 rouds per minute to the ceiling of 4000 m among other features.

Future cooperation with Russia can bring new design of the 20830 succesful type and well armed corvette into the arsenals of the Iranian navy.
It has displacement of 2100 tons and is heavily armed; in comparison to her size. with the numerous weapons , which include 8x large 3 M24 Uran missiles, and many other systems, including multiple torpedos and the above mentioned AK630M CIWS systems.

Go Russia... Waite you were celebrating IRIF achievements; my bad. Your point is made: After all the BS fed by the IRIF it still relies on others for advance armaments. Good for IRIF.

Either you cannot read well either you are biased. Where did I "say" that Iran has not made any progress or I disparage any efforts? Where?

I promote years now the achievements of Iranian Navy either via my blog-page either via military forums. I am just pointing out that this frigate isn't a frigate according to the Western standards, just a corvette that lacks CIWS, decoy launchers and SAMs. Iran should focus on installing more SM-1 on these kind of vessels and of course to install CIWS, otherwise there is no chance to survive even in a low-tension scenarios. Am I clear now?

Plus all the things you are saying come just from your fantasy, from nowhere else. Post the sources otherwise. And it's not 10,000rds/min, it's about half of it.

The current version of the Damavand design, in the light of financial constraints and its assignment for the Caspian Sea, meets basic requirements regarding its on board air defenses.
One has to acknowledge that Iranian specialists make always new advances with every new step to improve designs, and in a case of the Damavand, it is new powerful radar.

The Caspian Sea will be the shortest way for the Russian deliveries an actions in case of any emergency and adversary actions.
Iran and Russia will use their air forces and coastal air defenses to provide additional cover for their naval assets, and large missiles of the Damavand and on other Iranian corvettes (Commandante type), as well as on the Russian vessels, may neutralize any enemy coastal or naval assets of prospective enemies.

To mention about sources, read words of Gen, S. Shoigu, who .states that there is a need fore more frequent visits to each other, by Russian and Iranian navies, and that spells you a purpose...
There is also a possibility that in case of international tension Russian naval vessels will come and be based in Iranian ports of the Persian Gulf, providing in an essence kind of deterrent.

For the 'unon' at 4:30 PM I will state a troublesome consolation, that Iran partnership with Russia may bring an inheritance during this century for the Iranian nation.....

I would like to supplement my previous comments with an information that the 10 000 rounds per minute performance was achieved, when a second cannon was mounted in the same enclosed automatic turret of the AK630M-2 'Duet' system.
Please also accept my apology for the word "Commandante type", which should be corrected to "Combattante II type or Sina class".

Like it was previously stated by the admiral Abbas Zamini, Iran is going to dispatch light submarines to the Caspian Sea, where shelf boundaries still remain somewhat vogue in this oil reach waters.
And a recent information state that a submarine's construction takes place in the Iranian shipyard at the Caspian Sea.

Sources of my information are confidential, and no one sane would expect that Iran and Russia will openly publish their most secret matters at present times. They will be unveiled at a time of their implementation.

Congrats to Iranian for their new Sina Class, wish you that 3rd Sina Class ship finish as soon as possible.