An air strike by Syrian government forces has killed a senior commander of the Syrian branch of al-Qaeda, al-Nusra Front, Syrian state media has reported.

Pentagon spokesman, Colonel Steve Warren, said: "We cannot confirm press reports of the deaths of senior al-Nusra leaders near the province of Idlib."

However, he added: "Neither the US or the coalition have conducted air strikes near that location in recent days."

COMMENTARY: According to Nusra Front, three other military leaders were KIA in the airstrike, including Abu Musab Falastini, Abu Omar Kurdi, and Abu Baraa Ansari.

If the airstrike was indeed carried out by SyAAF (Syrian Arab Air Force), it would serve to provide a boost to Syrian Arab Republic armed forces, as well as the Iran-led coaltion against ISIL and Al-Qaeda linked forces that includes Nusra Front.

Some social media sources claim the airstrike was carried out by SyAAF Mikoyan MiG-29 aircraft. If true, it may have been the SyAAF Mikoyan MiG-29SM, a type known to carry an expanded arsenal of air-to-ground weaponry, including Kh-29T/TE (AS-14 'Kedge') and Kh-31A/P (AS-17 'Krypton') missiles and KAB-500KR guided bombs. [source: IHS Jane's] 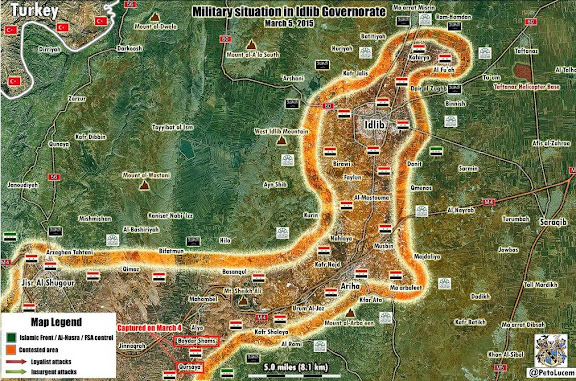 The air support provided by the Western coalition has cast shadows over Syrian Air Force's constant efforts in combating ISIS, which unfortunately have largely been un-recognized in the West.

Over shadowed by barrel bombs perhaps? Still, it maybe a good sign that the SAF has been able to regroup its assets and act on good intelligence. This country needs peace. Where is the FSA? Thanks for nothing USA and Turkey!. Lets hope this mess's end game is not a final show down between Al-Nusra and IS. Both of those travesty's destroyed and an accommodation between FSA and the Syrian government would better.

why all talk about barrel bombs like its something catastrophic?
guys tell me what is different between barrel-bombs & normal bomb?
1) both are bomb with explosive material.
2) both drop from planes.
3) both unguided weapons.
4) both made by military facility.
5) both kills peoples.