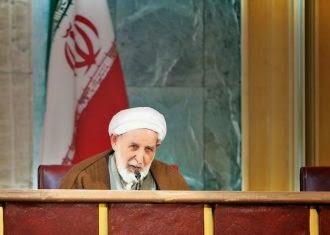 Iran’s hardliners today scored an impressive victory in the Assembly of Experts (AOE) by electing Ayatollah Mohammad Yazdi as its chairman. Yazdi handily defeated Ayatollah Hashemi Rafsanjani, the leader of the moderate faction, by a vote of 47 to 24, with two abstentions. AOE selects the country’s supreme leader.

Yazdi’s victory is a devastating defeat for the moderates, including Rafsanjani and the sitting president Hassan Rouhani and his team. It could also be an indication that the now-energized hardliners might try to block the expected nuclear agreement.

My fault, and my apologies to all our readers. The photo published before was that of Ayatollah Mesbah Yazdi. The new chairman of the Assembly of Experts is Mohammad Yazdi, the former Judiciary chief and himself a leading hardliner. And thanks to those of you who had sent us messages to correct the mistake.

My analysis of his election being a devastating defeat for the moderates and an impressive victory for the hardliners stands. This election could be the harbinger of the presence of an energized and more assertive hardline faction in the Iranian politics, including the nuclear negotiations.

BTW, 47 Republican senators voted for Iran letter. And 47 hardline members of the Assembly of Experts voted to elect Yazdi as chairman. What's going on?

Rafsanjani is a spent force and no hope for him. It is quite likely that the youngest Larajani brothers who is an Ayatollah will replace Sayyed Ali Khamenei as he has Sepah support. The "Iranians" in the west are oblivious to the power centers in Iran and domestic politics.

Nothing! Poor 47 is a prime number that is being abused by both conservatives on the spectrum! World Math Council has issued a statement that the number has nothing to do with conservatives and it is a pure coincidence! :)

Mohammad Yazdi, 84, is not quite a teenager, actually much older than Rafsanjani. Although he could be a Sepah favorite too, no?

BTW, are you one of those "Iranians" in the West. It seemed you were oblivious to Yazdi's age. But that's OK.

I admire political system of the Islamic Republic, because older people, who have more wisdom and experience than younger ones, are appreciated and not "discarded", like in the insane cultures of the West.

It, that someone is not fit physically like younger ones, cannot disqualife them to render their wisdom for crucial decision o r their country, and the Assembly is one of the most valuable futures of the Iranian political system.

Please enlighten us Anon 8:10 PM. You really believe that the youngest Larajani brother is going to replace Khamenei? And what does "Iranians in the west" has got to do with this subject? If I'm not mistaken the "west" is still on earth and not on planet mars?

I strongly disagree with your statement.

The only people discarded are women and people who are not so-called "experts" in the Shia Islamic religion -- since they cannot serve on this glorious "assembly". What a great and "valuable" feature of the Mollah Regime!