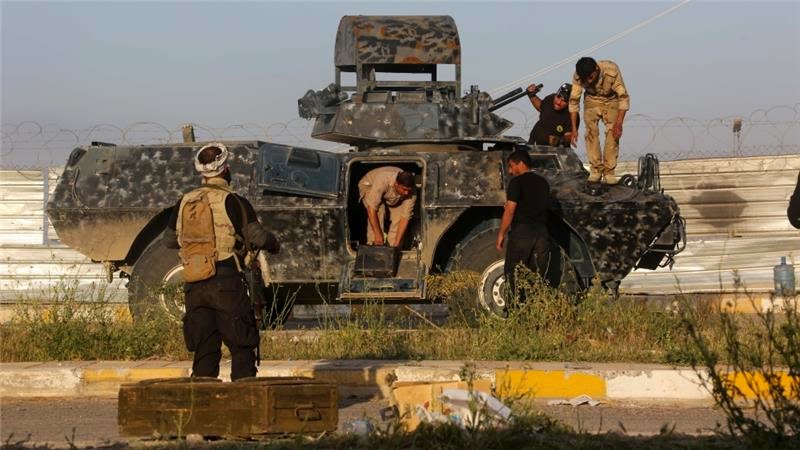 Islamic State insurgents traded sniper fire and mortar rounds with Iraqi militia and security forces on Sunday in Tikrit. But a military spokesman told Reuters that no major advances were made by either side. The military campaign by Iran-led coalition to liberate Tikrit has been stalled since Friday. Iraqi military officials say they would wait for reinforcements before moving forward. (Reuters, 15 March)

Meanwhile, Lieutenant General Abdulwahab al-Saadi, the field commander of the Iraqi security forces in Tikrit, told Aljazeera today that U.S.-coalition airstrikes against ISIL positions are needed to capture the city. Gen. Saadi said he had asked the Iraqi defense ministry for U.S.-coalition air support, but none was provided.

“The Americans have advanced equipment, they have AWACS (surveillance) aircraft. They are able to locate the targets exactly and accurately strike then, said Gen. Saadi. (Aljazeera, 15 March)

Saadi complained that support from the Iraqi air force had been “limited” and “not always sufficiently accurate.”

Karim al-Nuri, a senior commander of the Badr Organization militia and the spokesperson for the umbrella militia groups, the Popular Mobilizations Forces (PMF), said on Saturday, however, that it would take no more than “72 hours” to capture all of Tikrit. (Aljazeera, 15 March)

Photo credit: Iraqi forces on the outskirts of Tikrit (AP/Aljazeera)

Iraqis have come so much thus far. They should not ask for US air support, because it may interpreted as sign of weakness and that they are incapable of finishing an operation without us help and latter on US will accredit any victory for itself and subsequently preparing the ground for more intervention in Iraq's domestic affairs. Essentially us standing and policy in Iraq and Syria is not clear at all. Therefore it would be wise to get them less involved because you don't know their real intention and what would be the outecome.

the Iraqis remain lame and divided, hesitant and haven't come at all far...... they are indeed weak and need all the help that they can get.

they've massed 30 times the number of the ISIS force and the Iraqis, ignoring that massive force superiority, still can't bring themselves to move in.

Guerilla warfare is difficult to deal with, If you remember upon capturing Faluja US solderers were not successful to capture the city in their initial attempts and them too had to bring reinforcement and use unconventional weapons such as phosphorus incendiary ammunition to capture Faluja.

It depends which kind of requirement. As I understand they need more experienced troops with urban fighting skills.

Faluja is a good example. Recent history is full of examples of the limits of technology, numbers, total air superiority and raw firepower against a determined and well organised defence. Vukovar, Grozny, Gaza just a few examples. Saying that some more precision air power could be useful. If not the Americans then whats holding the Iranian air force back?

American marine corp and army are profesionals, Iranian-led coalition is not.