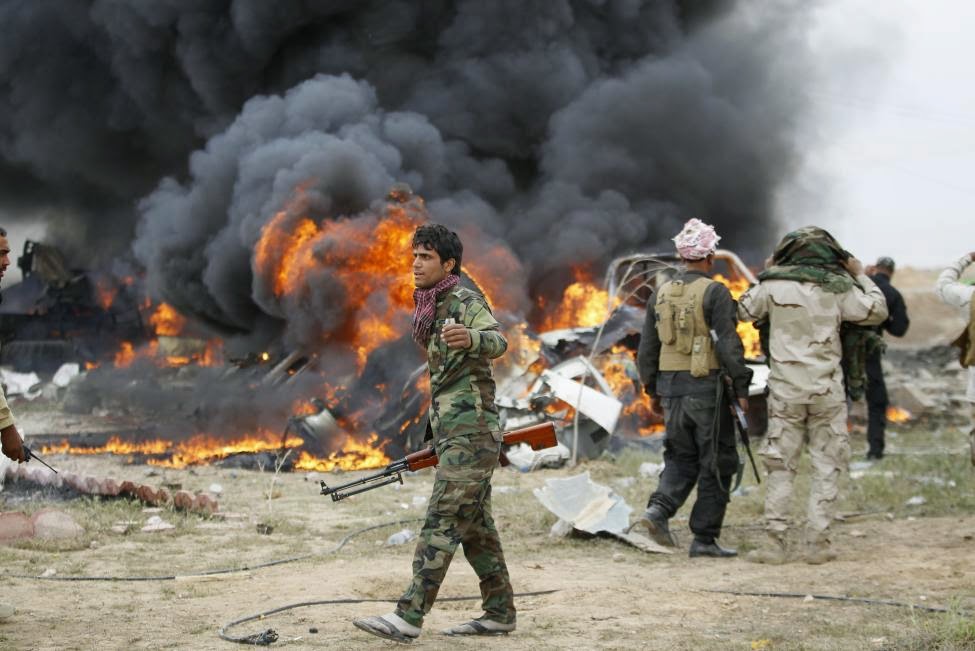 Iran-led coalition of predominantly Shia militias (PMF) and Iraqi Security Forces (ISF) came under heavy mortar shelling, sniper and machine-gun fire by ISIL insurgents in northwest of Tikrit today. The army and the militias struggled to advance from parts of the city they captured yesterday, Reuters reported.

The insurgents still hold the presidential palace and at least three other districts in the center of Tikrit, an Iraqi military source told Reuters. ISIL has also booby-trapped abandoned buildings.

Despite lack of progress on Thursday, the Iraqi Defense Minister Khaled al-Obeidi said on a visit to the frontline that operations were going according to plan.

“Now the second phase of the battle commences,” Obeidi told state TV Iraqiya. “All branches of the security forces are engaged in the battle as well as (Sunni) tribal fighters and the Hashid Shaabi (predominantly Shia PMF).” The minister did not mention the Quds Force leading role in the fighting.

More than 20,000 Iran-led Shia militia and nearly 5,000 Iraqi security forces and elements of Sunni tribes launched the biggest ground offensive to date against ISIL to liberate Tikrit 10 days ago. On Tuesday, they took the strategic town of al-Alam on the northern edge of Tikrit, paving the way for the attack on the city itself.

Photo credit: Shia militia fighters walk after an explosive-laden military vehicle driven by an ISIL suicide bomber exploded during an attack on the southern edge of Tikrit; 12 March 2015 (Thaier Al-Sudani/Reuters)

Significantly, Maliki-- who fashions himself as a political leader of PMUs--accompanied Abadi yesterday nighty to a visit near the front. I've been saying for quite some time, with posts covering his last trip as PM to the front and his reception in Iran on a state visit as VP, that Maliki remains a relevant political figure in Iraqi politics.

There should be a noose of armour and AA guns around the city.Then slowly tighten that noose by moving infantry and light armoured units into that city block by block. One more thing, the use of flamethrowers can also be a very effective when used against bunkered positions. Nothing scares a defender more than a flamethrower.