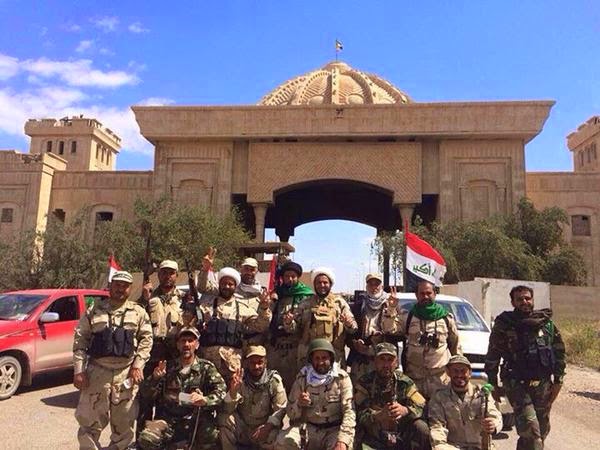 Iraqi security forces have retaken the Salaheddin provincial government complex in Tikrit from ISIL insurgents, a significant advance in the battle to recapture the city, AFP reported today. Some major Shia militia groups, like Badr Organization, took part in the fighting today alongside the Iraqi forces. But Iran’s Quds Force advisers and personnel, including General Soleimani, and some other major Shia militia groups stayed away from the offensive in protest to U.S. airstrikes over Tikrit.

Gen. Soleimani, who planned and commanded the Battle of Tikrit that began on 2 March, and was frequently photographed at the frontlines near Tikrit, with the pictures widely published in the social media, has not been seen lately. His photos attending state functions in Iran emerged last week, suggesting that the general and probably his top advisers might not have returned to Iraq since the U.S.-led coalition began its airstrikes over Tikrit.

This is a great day for Iraq.

This is a day of celebration for the people of Iraq and a big thank you to all the soldiers who sacrificed so much to liberate Tikrit.

Indeed! And congratulations to you, sir.

Well done to Iraqi forces fighting ISIL may this be the start of liberation of Iraq.

Now Lets do a nuke deal! Give credit where credit is due. On to Mosul. Lets see Sunni's liberate their own home towns. With some help from their neighbours and, if not countrymen anymore, then of the same civilization. Kurds, Arab, Turk, Iranian...... Shia, Sunni, christians and yes even Jews all living in the middle east. Where political Islam is the norm. Not a slaughter house between Secular and Islamic factional extremes.
I hope to see many a recently religious, ex drug dealing, misogynist if not rapist, dimwitted deadshits that speaks a western accented Arabic come to terms with their choices soon. Hey fully sick IS bro's, thanks for proving cowards X playstation breeds zombie's.
A few new constitutions wouldn't go astray I'd say. I prefer a western secular tradition myself. Say a constituation based on Christian values, which the society represented, once upon a time when it was written. But these days in Australia its called in some cabinets the Christro/Judeo tradition. Everyday our parliament sits, its first order of protocol is to read the lords prayer. My government spends more of my tax dollars on religious schools than state schools. My government recently changed its long held weak abstention to support LIKUD/Texas Veto. Hell Pakistan has been an Islamic state forever. They have Nukes. Get a little crazy sometimes. Why am I supposed to be so scared of Iran again? Ah yeah, they don't play cricket.
Muslim people live their religion.They should naturally develop their political systems. Unhindered. And Jerusalem must be the capital of Palestine. And peace should reign above profit, always!