Morsi Backs Syrian Revolutionaries – ‘They Have Will to Win’ 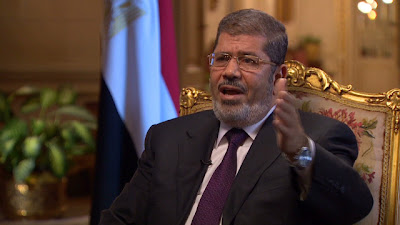 Egyptian President Mohamed Morsi said in an interview with CNN on Sunday that he supports the people’s revolution in Syria, adding that he believes the people will win and will form a government of their own choosing.

“The Syrian people through their revolution and through the movement will -- when the bloodshed stops -- move to a new stage where they will have an independent parliament and a government of their choosing,” Morsi said. “And then they will decide what they want to do to those who committed crimes against them. It is the Syrian people who decide.” (CNN, 6 January)

A GODSEND FOR ZIONISM!

-if this confused Egyptian leader is sincere and independent minded why does HE NOT UTTER SOMETHING IN SUPPORT OF THE BAHRAIN people demanding a regime change?.

-AND WHY DOES HE SUPPORT A GENOCIDE!, EQUATING Egypt's own revolution that was non violent to this devilish killing of civilians.

-MORSI ANS ONE TURKISH PRESIDENT can use their influence to stop this war and demand an ELECTION OVERSEEN BY THE UN.BUT like all stooges HE has to sing the tune of his masters.

Morsi is a puppet of the Egyptian military and has a US green card and used to live there. He will say whatever his masters order him to say. This guys looks like on drugs anyway.LOL.

Interesting times! The Muslim Brotherhood was the original Islamist movement that so much influenced Khomeini and other Islamists in Iran, leading to the revolution against the Shah. Now Brotherhood’s Morsi is a “stooge signing the tune of his masters!” (And just because his Syrian policy differs from Iran’s!) For the apologists of the Islamic Republic, is there a limit on how low can they sink? And doing this in the name of defending Islam? With friends like them, who needs enemy?

Nader, Morsi doesn't have a "Syrian policy". He is just copying whatever the American/zionist Syrian policy is. This is not about the Islamic Republic (which I don't particularly agree with, as I also don't agree with the Pahlavi regime), this is about Syria. The ones doing something "in the name of defending Islam" are the so-called "revolutionaries" (Islamic terrorists) in Syria. Muslim brotherhood and wahabbi types busy using children to chop off heads, massacring civilians, enforcing protection rackets on civilians, taking over civilian homes, massacring POWs, testing chemical weapons on animals and persecuting minorities just because they are not fellow wahabbi types.

Now, there are hypocritical leaders of states and talking heads in the media actually cheering on those al qaeda types doing the fighting in Syria, just because they are not the current regime. The rest of the time, these same hypocrites devote so much time and effort to demonising muslims and Islam, as well as saying how much of a "threat" Islamic terrorists are, when they are outside Syria. The double standards of those supporting the Islamic groups in Syria are clear for all to see.

Another point mentioned by B.MA, above. "why does HE NOT UTTER SOMETHING IN SUPPORT OF THE BAHRAIN people demanding a regime change?." Not only Morsi the hypocrite but, all the other hypocrites who are cheering on those al qaeda types doing the fighting in Syria. Why don't they also, utter anything in support of the Bahraini people in their, genuine revolution? Yet another example of double standards.

It is perfectly clear for all to see, that the hypocrites who are cheering on those al qaeda/wahabbi types doing the fighting in Syria are only concerned with revolutions and "democracy", when they are directed against countries and leaders that are not pro-USA/pro-zionist. Those same people are actually against any kind of revolutions and "democracy" in countries that are pro-USA/pro-zionist, like Bahrain.

Interesting argument. Defending the rights of Bahraini people to topple their corrupt monarchy, but at the same time opposing the popular in Syria to topple the Assad dictatorship is not considered hypocrisy!

There is a region-wide Arab movement to gain their long-dormant aspirations. They will have many foes opposing them. Some outright reactionaries opposed to any democratic movement in the Arab land, like the Syrian and Bahraini governments. Some in disguise like Al Qaeda and other extremists wanting to hijack the movements for their own sinister goals. But the right thing to do is to defend the right of the Arab people to have their dignity and choose their form of government, even if those newly instituted governments might not prescribe to all ideals of democracy and progressiveness. The alternative is to side with the reactionaries, or become hypocrites, like defending the movement in Bahrain and Yemen but not in Syria.

Last point, we need to give these new governments, in Tunisia, Egypt and Libya, a chance to form their governing principles and direction. It’s so easy to accuse them all as “stooges.” It makes “analysis” that much easier for some!

Who is opposing Syrian people toppling the dictatorship? I have not. I have opposed the al qaeda/wahabbi types in Syria; many of whom are foreigners. Not even Syrian. As you said "Some in disguise like Al Qaeda and other extremists wanting to hijack the movements for their own sinister goals.". That's the point with Syria, now. Exactly that, is happening now. There is no way in which such extremists are interested in promoting anything democratic. Do you seriously think that using children to chop off human heads is in any way, promoting democracy?

"But the right thing to do is to defend the right of the Arab people to have their dignity and choose their form of government, even if those newly instituted governments might not prescribe to all ideals of democracy and progressiveness.". Yes, that's why the Syrian people need to reject and defeat BOTH the Al-Assad regime AND the extremists of the Islamic terrorist groups who have hijacked their revolution for their own, undemocratic and sinister goals.

It is perfectly clear for all to see, that the hypocrites who are cheering on those al qaeda/wahabbi types doing the fighting in Syria are only concerned with revolutions and "democracy", when they are directed against countries and leaders that are not pro-USA/pro-zionist. That is why they say little or nothing about pro-democracy protests and revolutions in countries like Bahrain and Kuwait.

BAHRAIN SITUATION IS TOTALLY DIFFERENT THAN SYRIA,BAHRAIN HAS 600 THOUSANDS POPULATIONS AND A GRASS ROOTS MOVEMENT START OFF PEACEFUL AND STILL PEACEFUL,UNTIL SAUDIS INVADED THEIR COUNTRY BY ORDER OF U.S AND OCCUPIED THE COUNTRY.THERE HAS BEEN NO ANTI AIR CRAFT AND MISSILES USED BY BAHRAINIS, THE MOVEMENTS START WITH INTELLECTUAL AND POULAR PEOPLE MOVEMENTS IN MIDDLE OF CITIES,ONTHE OTHER HAND SYRIA TURMOIL START FROM BOARDERS CITIES,AGENTS AND MERCENARIES WITH SAUDIS ,QATARI, FINANCING ,ARE KILLING PEOPLE ON STREET ATTACKING CIVILIANS.THESE MURDERERS ARE NOT SYRIANS.HUNDREDS OF THEM HAS BEEN ARRESTED AND THEY ARE NOT FROM SYRIA.THESE KILLERS ARE DONE BY AL-QADAS AND OTHER MERCENARIES. THEY ARE GETTING PAID 130 DOLLARS A MONTH JUST TO SHOOT AT PEOPLE AND CREATE CHAOS.(SO PLEASE STOP MANIPULATING THESE TWO COUNTRIES STORIES OF STRUGGLES.

“Bahrain situation is totally different than Syria.” Yes, Iran’s relations with the two governments are totally different, hence your declaration, and why am I not surprised hearing that coming from you! When Iran’s foreign policy is the base on which you decide which popular movement to support and which to deny, you get into a dangerous territory of choosing between reactionary forces and losing your objectivism. And when Iran changes its policy toward Assad, I am sure you will be full of PRAISES for the popular movement of the Syrian people. We’ve seen these movie before!

"When Iran’s foreign policy is the base on which you decide which popular movement to support and which to deny," just replace Iran with USA and that would be an exact description of the situation. That is exactly what the people who are cheering on those al qaeda/wahabbi types doing the fighting in Syria, are doing. Only supporting anti-regime efforts on the basis of what fits in with the USA's (zionists') foreign policy.

This blogger has always defended the popular movement in Bahrain against the ruling monarchy there. As I have defended the movements in Tunisia, Egypt, Libya and Syria. We have to be on the side of the Arab movements even though we might not totally like the immediate outcomes after the overthrow of the dictatorships. Those societies will eventually find their own way into prosperity and relative freedom.

Unfortunately Nader, not everyone who is cheering on those al qaeda/wahabbi types doing the fighting in Syria, agrees. Especially not the foreign leaders and talking heads in the western, mainstream media who are supporting the Islamic terrorists in Syria. That includes Morsi in Egypt. That is why they normally say nothing about the anti-regime efforts in Bahrain and Kuwait and the few times when they actually do, they say very little and NOTHING like what they say about Syria.

yes,iran is friends of syrians and bahrainis,iran can't occupations,yes we don't trust a puppet regime in bahrain,a regime for selfinterest allow its land to be occupied by foreigners.iran and syria have been friends for 33 years and it will never change.as matter of fact i support what ever secure interest of iran at any time.iran is what i think and breathe for.long live iran.

Yeah just like IRI controlled opposition of their puppet Mousavi and the green movement,it is called (delaying the inevitable) demise of the Islamic theocracy.