EU, Turkey Call on Assad to Step Down 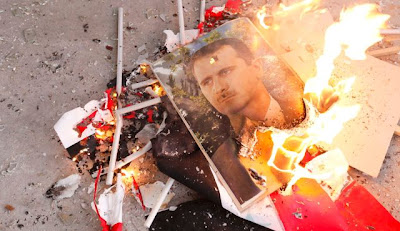 Syrian President Bashar Assad must step down in order to bring about a political solution to the war in his country, the EU said on Sunday. The statement followed a speech by Assad in which he said he would not negotiate with the opposition to end the Syrian uprising.

“We will look carefully if there is anything new in the speech but we maintain our position that Assad has to step aside and allow for a political transition,” said a spokesman for EU foreign affairs chief Catherine Ashton. (Reuters, 6 January)

Meanwhile, Turkish Foreign Minister Ahmet Davutoglu said Assad had simply repeated empty promises in his speech in Damascus on Sunday, and called for a swift transition in the war-torn country.

“His remarks are just repetitions of what he's said all along. They are the same promises he made to us,” Davutoglu said. “As Assad no longer has the representative authority over the Syrian people, his words have lost persuasiveness. A transition period needs to be completed swiftly through talks with representatives of the Syrian nation.” (Reuters, 6 January)

“If it is clear now that Assad will not do anything new, then the UN Security Council must decide on a stance on the situation in Syria,” Davutoglu added.
British Foreign Secretary William Hague accused Syrian President Assad of hypocrisy.
“Assad speech beyond hypocritical. Deaths, violence and oppression engulfing Syria are his own making, empty promises of reform fool no one,” Hague said in a message on Twitter.

He either has to step down or strung up!

the same people who will be jailed in the guantanamo, as al kaida terrorist
are now syrian freedom fighter
and that is not a joke and not hypocratie at all.

The blog authors seem to cheer for the Salafi/Takfiri/Wahabi Jihadi radicals. Brainwashed to the max.

This will surely change Assad's mind!

But seriously, anyone who is half awake can see right through Turkey, Persian Gulf Arab states, and the EU's plots.

-WEST'S HYPOCRISY AND BLACKMAIL -too naked and fools no one!.

@-I would wish to repeat the tittles given to President Bashar ASSAD now having fallen out of favor with the west-HE IS A TERRORIST,A DICTATOR,A BITCH,THE BUTCHER OF DAMASCUS,!.TODAY Assad has around fifteen titles under His belt all describing HIM as the worst leader the world has had since HITLER!.

@-A few month before the Arab spring ASSAD is the same blue eyed boy in the middle east!.HIS PALACE IS AWASH WITH PICTURES OF HIM DINNING WITH LEADERS OF THE WESTERN COUNTRIES,and a treasured picture o Him having an exchange with the QUEEN OF ENGLAND!!.

@-HYPOCRISY in the west does not end there!,JUST WHO ARE THE ASSADS?-a creation of the west to overseer their interests.From OMAN to MOROCCO these despotic kings were planted by the west .

@-Democracy is a word too alien to these kings.AND THE WEST will always close their eyes amid repressions amid glaring human rights violations committed by these crowned mistresses .but what happens when the stooge decides to take independent decisions?

@HELL HATH NO FURRY THAN AN ARAB STOOGE breaking loose from the grasp of HIS WESTERN MASTERS! -

That's because of B.M.As rants!