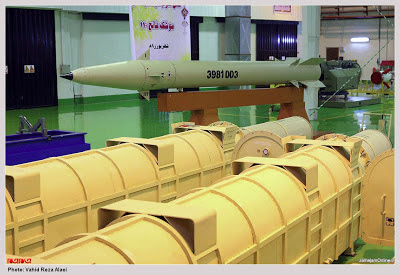 Israeli warplanes struck areas in and around the Syrian capital Sunday, setting off a series of explosions as they targeted a shipment of Iranian-made guided missiles believed to be on their way to Lebanon's Hezbollah, CBS reported today. The attack, the second in three days, signaled a sharp escalation of Israel's involvement in Syria's bloody civil war.

The target of both attacks, on Friday and Sunday, were Fateh-110 missiles, which have precision guidance systems with better aim than anything Hezbollah is known to have in its arsenal. (AP/CBS, 5 May)

The Fateh-110, or Conqueror, is a short-range solid-fuel ballistic missile developed by Iran and first put into service in 2002. An upgraded version was unveiled in 2012 with improved accuracy and increased range to 185 miles.

Damascus was thought to have better air-defense systems than any in Iran...........

Wrong! Syria is one most incompetent countries on the earth. Just look a t how Al-Qida is playing with them.

if you think Syria is incompetent, how do you explain the group of sleaze that's actually ruling over the Iranians?

good that itan is not an AraB Country.

Damascus was thought to be ringed with those S-300 batteries that the Iranians were hoping to have.

Anonymous May 5, 2013 at 3:56 PM
Exactly,the fact that assad has never retaliated against the various israeli attacks on his country has only emboldened them,at the very least he should have launched a salvo of long range missile against the air bases the aircraft took off from

Syria does not have s300`s,you should really do your homework before you make silly statements that embarrass yourself

The initial Israeli raid never entered Syrian airspace, and used stand-off weapons. I also think Damascus is hesitant to shoot back at the Israelis for now. They don't want a two front war that escalates. Especially now that they are no longer losing.

You also assume the S-300's are even fully manned and operational right now...And let's not forget the downing of the Turkish F-4 Terminator last year. The Syrians still have teeth on a certain level.

Arab armies are totally incompetent and their 'officers' are not recruited on merit but on sectarian and tribal loyalties. Syria only has the Pantsir-S1/SA-22 Greyhound system and even that is not manned 24/7 as Arab officers go home after 5pm as they consider their jobs as executive type jobs that merely requires lording over uneducated conscripts. Crazy Saddam had the best weaponry the US, Europeans and USSR could supply but they still could not defeat a largely disorganized and leaderless Iranian military and Sepah, not to mention the Basij minesweeping kids.

Russians never supplied any modern weapons to the Arabs and will not lift a finger to help Syria as they have shown their duplicity 1967, 1973 and all Zionist invasions of Lebanon, the bombing of Iraqi nuclear facility at Osirak and other strikes on Arabs. Russia today is a weak Islamophobic nation and has no real influence or power in the world. Their "support" of Syria was merely cosmetic.

Syria is headed for sectarian Balkanization and likely Salafi takeover if Iran, Hezbollah remain passive. I am afraid it is the time the mullahs put up or shut-up. Iran should never have gotten involved in Arab affairs anyway and the idiot Ahmadinejad's moronic outbursts did not help Iran's image in the west either. The loudmouth mullahs are about to eat humble pie in industrial sized servings.

The Zionists have learnt from the Arab impotence that they can strike with impunity as there will be no retaliation. If Iran continues to bark meaningless threats in support of Syria and does nothing, I can spell out with 100% certainty that Iran will be attacked itself by summer. This was the main US/Zionist plan anyway: destroy Syria first, Hezbollah will disappear on its own without support and then go after Iran, the main oil rich PRIZE. The next few months will make things quite clear as an Iranian internal destabilization effort will be launched during the elections. As the Chinese say, may you live in interesting times.

My friends what you say is logical as even a bullied child knows that weakness only invites more aggression. The Zionists have held almost all of Golan since 1967 and then added more in 1973 and Hafez al Assad supported their aggression against PLO in the Lebanese civil war and even attacked Amal (forerunner of the Hezbollah) and restricted any guerrilla activity on Golan. The Zionists have the most advanced ELINT monitoring station at Mount Hermon on Golan and that should be the obvious target of limited retaliation. The loss of Zionist "eyes and ears" will hamper their capabilities substantially and not provoke an all-out war as the Zionists are afraid of getting their urban hovels of Tel-Aviv, Haifa and Ashdod demolished in an all out war and their luxury oriented population will flee back to Europe, Canada, US and Australia. Zionism is mostly bluff. Time for Syria to act as it is being destroyed anyway and has NOTHING TO LOSE.

I suppose that depends on the "Arab Army" in question. During the various Arab-Israeli wars, the Israelis concerned the Syrians their only real match. That combined with the fact that Hezbollah gave Israel a bloody nose in 2007, and the fact that the Iraqis managed kill nearly 1,000,000 Iranians during the longest declared war of the twentieth century, tells me that when Arabs are properly equipped, trained, lead and motivated, they are just as capable as anyone else in the world.

That said, I utterly agree with your notion that Iran should not get involved in the affairs of Arabs and the Arab World. This could be said for anyone else as well. Turkey, the USA, Pakistan, China, Russia, etc. Only Arabs understand Arabs, and why they do what they do.

It's all about the Zionist Regime State of Israel's fearing of IRAN's indigenous advanced Fateh-110 short-range solid-fuel ballistic missiles. Of course not to mention the great nation of IRAN itself. What a nightmare for Israel!

The Arabs did not kill 1,000,000 Iranians. That's the biggest fallacy of the entire Iran-Iraq episode and it gets regurgitated forever and ever.

I concur, the Syrians had the "best" military in the Arab world when they were united and before being backstabbed by the treacherous Sadat during 1973 when the Zionists directed their whole airforce at Syria after the Egyptians in an agreed move with US and Zionists stopped their Sinai attack only after 4 days and moving barely 10 kms east of Suez, rather than advancing to the Giddi and Mitla passes. As agreed between the Egyptians and the Zionsits, the Syrians were then isolated and subjected to the brunt of Zionist firepower. The exiled Egyptian Chief-of-Staff General Saadedin Shazli gives a harrowing account of Egyptian double-cross of Syria in is book CROSSING THE SUEZ and insiders account of the October 1973 war.

The initial Syrian thrust on Golan all the way to Lake Tiberius was very successful but they could not keep up the momentum after being subjected to incessant air attacks on the enclosed Golan plateau and lost almost all their armor and the Zionists advanced almost to Damascus and stopped only at Sassa ridge due to a US brokered ceasefire. The USSR was in collusion with both the US and Zionists and did not even veto any resolution at the UN. The same history is repeating in Syria today as treacherous Arabs are destroying another Arab state piece by piece.

The ease with which the Zionist attacked and destroyed the weapons dump and military barracks in Damascus also sheds a very poor light on Turkish military at its airforce is also totally incompetent that it had its F-4E shot down by the pathetic Syrian AD while the Zionists have roamed the Lebanese and Syrian skies with impunity. In the end it begs the question that even a so-called NATO "Muslim" state like Turkey is very weak and pathetic in terms of its military capability. No wonder the Turks could not defeat the PKK in 40 years of losing counter-insurgency campaign. The so-called Muslims states are really at their lowest point and facing endless humiliation and unfortunately the idiotic Iranian mullahs are in the middle of this sorry mess.