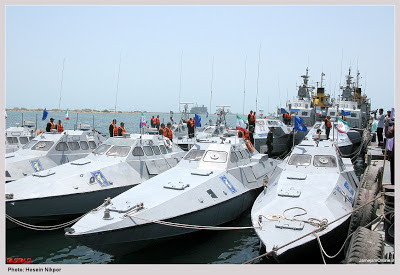 The head of Aerospace Organization at Iran’s Ministry of Defense, Brig. Gen. Mehdi Farahi, told reporters in Tehran today that his organization has produced a new sea-based cruise missile with a firing speed of 300 km/h (186 miles/hour) that can be fired from fast attack craft at a speed of 30 knots. The new missiles, still unnamed, have been delivered to IRGC Navy, Gen. Farahi added. (Fars News Agency, 12 May)

IRGC Navy’s area of responsibility includes the Persian Gulf and the Strait of Hormuz. The naval force, organized for asymmetrical warfare in the Gulf, has been operating a series of rockets and missiles, fit to be fired from fast attack craft, named “Zafar,” “Nasr,” “Nour,” “Ghader,” and “Ghadir.”
File photo: IRGCN fast attack craft (Jaam-e Jam/Hosein Nikpor)
Posted by Nader Uskowi at 11:22 AM

Let say if one single fast attack craft which can be fitted and fired with at least 2 indigenous advanced sea-based cruise missiles and 2 rockets on board of it, and that will make 4(missiles and rockets) for each of them. So try to imagine what tens of hundreds of them(those crafts) can do to any single Zionist or West enemy, aggressor or warmonger's large naval vessel in the engulfed Persian Gulf and Strait of Hormuz indeed?

Not really! it reality it is the other way around. The days of large naval vessels of even large military formations like "Divisions" are over in the age of missiles and asymmetrical warfare. Small mobile units can bog down bigger enemies. Viet-Cong, the Afghans and Hezbollah are shining examples of dedicated asymmetrical forces defeating bigger powers.

Anonymous May 12, 2013 at 6:07 PM
In the straits the iranian FACs will be operating under the cover of land based SAMs,you would have to deal with them before you could try and attack iranian surface naval forces,but your biggest problem would still be the mine fields rotected by land based antiship cruise and ballistic missiles,the beauty of weapons like this is that it would force us naval forces to have to stay a minimum of 300km away from the iranian coastline

Yes, more than enough to sink anything in the Persian Gulf which is barely 100 kms wide in most places or even less. Nothing can stop or evade Iranian missiles fired in mass or swarming tactics. There is no anti-missile system so far against mass salvos or multiple warheads, specially in enclosed maritime areas. Shooting ducks and just shoot and scoot with small FACs, aircraft, helos and and very difficult to detect mobile, dispersed and small land based systems. Iranian coastline on the Northern side of the Persian Gulf with numerous hidden coves, caves, small and big islands and jutting hills with tunneled bunkers is ideal for these types of weapons.

Must have been a mistake on the part of the article writer. It has got to be the range. Can't be a 300km/h missile ... that's world war two technology...

I think it is an typo error and the RANGE IS over 300kms as no vessel can hit 300kph or 200 knots on water. That would be just too far fetched!

and how would having to base aircraft carriers off the coastline be any hindrance to the US aircraft and missiles that would destroy the Iranian military?

US aircraft have ranges measured in 1000s of km.