Iran Navy to Use New Mine Sweeping System

Reaction to Mine Countermeasure Exercise by U.S. and 30 Allied Navies 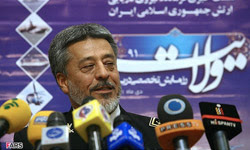 Iranian Navy Commander Rear Admiral Habibollah Sayyari said today the navy will start operating a “new mine sweeping system” in the Persian Gulf in coming days. The announcement coincides with a massive International Mine Countermeasure Exercise (IMCMEX) by the U.S. and more than 30 allied naval forces that will take place in the region on 6-30 May.

“As Americans have declared, they plan to carry out joint mine sweeping drills with around 30 world countries, but these measures are all line with (their) Iranophobia plots,” Adm. Sayyari said.

”Yet, he said Iran will not sit silent when the enemy troops embark on staging maneuvers in the region. This week we will bring into operation a mine sweeping system that we are now working on so that if the trans-regional enemies take a (hostile) move in this region, we could be able to sweep the seabed,” he added.

The coming exercise is only as a sign of 'show of might' which unawarely, clearly reveals the U.S.'s 'frustrations' after the tiredness of the successful, 34 long wasting years of hollow 'barkings' against the great nation of the Islamic Republic of IRAN, and of course, nothing else.

Just the fact that such a large Allied coalition is taking a stand against Iran should be enough to stop Iran from threathening to mine the International waterway and trying to close the Strait of Hormuz by harrassing shipping in the Persian Gulf and in the narrow space of the channel, because if they attempt such a move they will be completly ravaged by militaries from 30 countries.

Iran has itself to blame. What kind of leadership is it that announces its intention to disturb and disrupt the free passage of tankers and cause harm to neutral naval vessels carrying natural resources and other assortment of goods?

Only a rogue regime would do that.

Such threats concern the whole global community...and Iran has absurdly enough chosen not to be part of it.

Anonymous May 4, 2013 at 3:09 PM
Actually the much hyped nato mine sweeping exercise was a complete disaster with less than half the fifty or so mines being discovered,in the event of an actual conflict the ability of iran to mine the straits is not in doubt,it has the largest stocks of sea mines in the region ranging from ww1 contact types to the latest captor types,it is extremely formidable,the ability of its opponents to counter this is far less than certain.It is the west that threatens irans rights to commerce what are sanctions if not economic warfare,and in the event of any attack on,or blockade of iran it would be perfectly within its rights to close the channels in the straits that are within irans territorial waters.Last time I looked the true global community supported irans nuclear rights,don`t make the mistake of assuming that the usraelis and their western lickspittles are the "international community",they are not.The true rogues here are not iran but those who are threatening iran

Perhaps they`ll have better luck this time,perhaps they`ll find 30 out of fifty,of course in a real war how will they sweep for mines when iran is shooting antiship cruise and ballistic missiles at them,not to mention iranian submarines and fast attack craft also shooting at them,none of this exercise strikes me as being very realistic,in the event of an actual war there will be no tanker traffic because the straits would be a virtual shooting gallery and I would not want to be part of any naval force that ventured into the straits because their chances of getting out in one piece would be very slim indeed.This exercise is good propaganda show but its not really fooling anyone in the know,I have little doubt that the commanders of those ships know just how vulnerable they would be in the event of a shooting war

are you serious? Iranian boats and subs will be unlikely to survive even one mission.

Thats funny,I was just about to say the same thing about any western naval force that attempted to force any iranian blockade of the straits,as for iranian losses that would depend on how many of the enemy they destroyed,exchanging a sub or two or some fast attack craft for a western destroyer or cruiser or better yet an aircraft carrier would be a very good exchange