Internet Enters ‘Coma’ in Iran – Ahead of Presidential Election 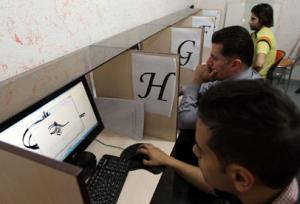 “The Internet is in a coma,” wrote Tehran’s Qanoon daily earlier this month. The Middle East Online in a piece published today explains the symptoms. The authorities, mindful of massive street demonstrations post-2009 election, have tightened control of the Internet, deliberately slowing it down for average users.

“It only happens in Iran: the election comes, the Internet goes,” Qanoon quoted a recent tweet in Farsi.
Facebook, Twitter, YouTube and numerous other sites, including thousands of blogs, have been censored in Iran in the aftermath of the 2009 protests. Now the Internet has become so slow that the average person cannot download almost anything. But the drop in bandwidth and widespread disruption of the Internet is now severely affecting businesses, banks and even government organizations.
A network administrator at a major Internet service provider in Tehran is quoted on the report that his company had been unable to address complaints about slower speeds, particularly accessing pages using the HTTPS secure communications protocol.
“Browsing (the net) is difficult due to the low speed. Even checking emails is a pain,” he said.
The problem is not limited to slower speeds, but also affects what people can actually access online. The censors have taken great care to ensure that people do not see or read things deemed to be inappropriate from their viewpoints. The last remaining software that enabled users to bypass filters imposed on net traffic, like the virtual private networks (VPN), “have become practically inaccessible,” said an Iranian IT website. (The Middle East Online, 19 May)
VPN uses certain protocols to connect to servers outside Iran. In that way, the computer appears to be based in another country and bypasses the filters. Use of VPN, or its sale, is illegal in Iran.
Ramezanali Sobhani-Fard, a member of Majlis and chairman of its communications committee, said VPN was blocked in early March, which has contributed to slowing the Internet.
Last year, the authorities established the Supreme Council of Cyberspace, tasked with guarding Iranians from “dangers” on the Internet. The council is now the lead agency for implementation of official Internet policies and behind the recent disruptions in the use of the Internet in the country.

If the intention is to head off a revolution then this tactic has the potential to backfire fir the regime.
Eliminating the Internet as a communication option will push revolutionaries to using untraceable means of communication and going back to 1979 mode.

This horrible disease that has befallen the Iranian nation emanating from the sewer hole called Qom -- the undead wraiths officially known as Akhoonds.

The Stuxnet virus has helped Iranian experts to get an insight into the inner working of viruses and counter computer coding. Once upon a time it was virtually impossible to locate and identify an individual hiding behind a virtual private network (VPN) to anonymously access web resources, but now there are software that could allow government agencies to block or track people for crime prevention/investigation activities. Although these software are forbidden for export, I would not be surprised if somehow IRI managed to get hold of them or Iranian software engineers created their own version of such software. I understand the freedom loving Bahraini government was supplied with such software by the UK government to combat the criminal activities of its citizens!

Officials said Saudi government websites were the target of cyber attacks in mid-May. They said several of the sites, including that of the Interior Ministry, were brought down by foreign hackers.

The Interior Ministry said an investigation traced the attack to hundreds of addresses in several unidentified countries. The ministry said its website was restored within two hours.

This marked the second major cyber attack on the Saudi kingdom in less than a year. In 2012, the state-owned Saudi Aramco was disabled by an attack that inserted viruses in 30,000 computers.

Later, Saudi authorities announced the arrest of several Aramco employees with access to the company’s computer system, but denied any link to the cyber strike.

Over the last week, Syria has been linked with cyber attacks on Western websites that relayed information by Sunni rebels. This included Britain’s Financial Times newspaper, hacked by a pro-Assad group called the Syrian Electronic Army.

“Hacking private or state-owned websites is punishable by the law, and those responsible for this will be uncovered sooner or later,” Saudi Information Minister Abdul Aziz Khoja said.

if you block https or vpn to server outside iran, it does not make interner slower
rather faster because you eliminate more computingintensiv traffics.

Internet Access to all iranian side und newspaper working without problem.

VPN to outside iran could be a security case

I am not an expert but the internet slowness could partially be explained by the packet sniffing and decryption software employed in each internet node to filter out and inspect traffic to outside world. Soon or later the real reason for the slowness will leak out from an insider working for a service provider.

what does bring bring packet sniffing ?
usually you can recognize the vpn packet, you can block it easy
but you can not decrypt it.

I was im iran and have dsl at home, it goes never beyond 50kbit/s
the interspeed in iran is awlays too slow