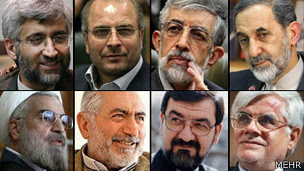 The Guardian Council today allowed eight men to run for the presidency of Iran. The eight candidates are:

The list was as important for who was not included, namely Rafsanjani and Mashaie   UPDATE: Both the conservative and the moderate camps have reportedly held late night meetings in Tehran. If the supreme leader does not overrule the Guardian Council’s decision on Rafsanjani in the next day or two, Aref might withdraw in support of Rouhani. The coalition of three and Jalili could also field a unity candidate. Rezaie might then find himself isolated from his conservative base and might withdrw the way he did in the past two elections. Qarazi is a non-entity.

A more detailed listing of the candidates qualified to run in the 2013 election::

I have serious problems with the use of word of "independents" and Rezaee and Gharazi... They are certainly conservatives and belong to conservative factions in Iran

All those left are charlatans, double agents and persecuted criminals - in many cases all in one package; that is how you flourish in islamofascism

Yes and there is no hypocrisy, charlatans, corrupt politicians in the west? Oh Please, Politicians are pretty much the same, they are in it for their own interest, the difference is really what the other institutions and centers of powers do and if there are any real checks and balances.

The selection has started. All the sheep to the ballot boxes now. The rest with an ounce of brain, stay tuned for more slogans and the promise of Nirvana.

The only worse alternative to these idiots running the country is a civil war like the one going on in Syria.

Exclusive: Iran's frontrunner for president speaks of his life battling US power

Saeed Jalili, Iran's top nuclear negotiator, has declared his candidacy for the June 14 presidential election. The forever revolutionary is fiercely loyal to hardliner Ayatollah Ali Khamenei.Saeed Jalili's shock of white hair, rimless eyeglasses and crisp white shirt buttoned up to his trim salt-and-pepper beard make him one of Iran’s most recognizable figures in the West, but he has proven an enigmatic figure for those who have sat opposite him at the negotiating table during years of fruitless nuclear talks.

Mr. Jalili can interact with smiles, laughter, and even well-placed charm. But his calm and low-key demeanor – he wears sensible shoes of soft black leather that don’t require polish, and he could not be more different than the flamboyant, divisive, and fiery outgoing President Mahmoud Ahmadinejad – does not diminish his uncompromising message of Iranian resistance, and preserving Iran’s “right” to nuclear energy.

Jalili told The Christian Science Monitor that the Islamic Republic of Iran is winning its strategic struggle with America, despite crippling sanctions and Western attempts to isolate it from the world. And Jalili says that he is the man to carry Iran’s revolutionary torch into the future.

Whatever drugs you are on, kindly stay off them! What "civil war" and who is going to "fight" it and against "whom"? LOL.

Jalili a real war hero and his War memories

The second most formative event for Jalili was the Iran-Iraq war. As a young volunteer frontline scout, Jalili manned watchtowers and monitored enemy movements, sending target coordinates back to artillery units. Jalili’s social media accounts today publish photos of a bearded young man in uniform at the front, and portray him as a humble war hero.

Jalili fought in the Karbala 5 offensive in early 1987, one of the biggest battles of the Iran-Iraq war with tens of thousands of dead on both sides, and heavy Iraqi use of chemical weapons. Iranian sources indicate that Jalili’s lower right leg had to be amputated due to lack of proper equipment at the Shalamche frontline.

Even in the grim annals of the Iran-Iraq war, which claimed nearly 400,000 dead on both sides, Shalamche holds a legendary place. Another survivor, cameraman Reza Borji, once said: “We gave a martyr every 1.5 meters; that is, the whole place was covered with [the bodies of] martyrs…. This war was sacred for us.”

Not all Iranians felt the ideological pull of the war in the same way. Many secular Iranians – those who wanted a reformed and kinder, gentler Islamic revolution, or none at all, many of whom years later took to the streets as part of the opposition Green Movement in the 2009 protests – formed the other side of Iran’s wide social divide.

But for a believer like Jalili, such an experience at Shalamche was a searing moment that he rarely talks about in public, which few of his Western diplomatic counterparts could comprehend. The result for him is a stated reliance on those early principles of resistance and justice to solve every problem, from sanctions to the nuclear issue.

“Even after the end of the war, the Americans continued to work to prevent the growth and the development of that idea, in different fields and different settings,” says Jalili.

But US “efforts to stymie our scientific progress” have failed, as have sanctions. “Nevertheless, people of my generation continue to feel that responsibility, because of that call to duty.”

The result, claims Jalili, is that “Iran has managed to break the imposing stature of America.”

“We fully believe that this idea [of Iran’s revolution] has every potential to help different peoples to prevail over those clubs of power and wealth, and can bring happiness, prosperity and welfare for different societies,” Jalili told the Monitor.

This is a war here, whi has fought for his country - not like Jalili for islamofascism