Despite Plunge in Trade with Iran 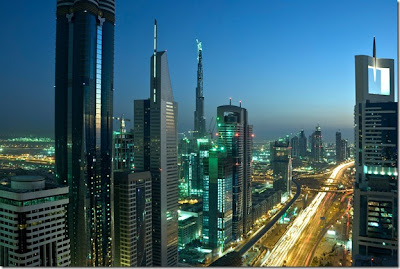 “Up to this quarter, we reached an approximately 16 percent growth in trade," Ahmed Butti Ahmed, director general of Dubai Customs, told Reuters in an interview. (Reuters, 14 May)

Dubai’s trade with Iran dropped by 31 percent in 2012 due to international sanctions, and continued its plunge during the first quarter of 2013.

“The embargo on one side, the other side is that the Iranian currency became very (weak) so it has become a little bit more expensive for them,” Ahmed said.

Photo credit: Dubai skyline at night (slickzine.com)
Posted by Nader Uskowi at 10:49 AM

But how much of this "trade" is non-oil sector export? Iran's are up, significantly. How about Dubai?

I could not get the details, but will do so soon. However, I assume the influx of foreign-currency revenues have to do with non-oil re-exports as well the real estate sales.

Someone please tell Mr. Mark that the IRI's "non-oil" exports include products that are derived from oil. The IRI's non-hydrocarbon exports are minuscule in the scheme of international trade.

This photo look very nice and I hope Iran will have many centers like that in the future.

But sometimes appereance doesn't tell all truths, because there are many people in this world who have everything in short period of time, but their fortunes were created from prostitutions, speculations and even helped with murders or exploitation of others.

I prefere honest and steady development, that will bring healthy foundations for society and nation, where all people work for their common good.

Iran is doing quite well without the puny petro-pimps anyway. Thanks.

Iran will leave the U.S. behind by the end of the current year to become the world's third largest cement exporter, the Global Cement magazine wrote in its latest edition. Iran is projected to export 18-20 million tons of cement in 2013, ranking the third place after China and India, May edition of Global Cement reported.

Iran is currently exporting cement to 24 countries. Despite international sanctions against the Islamic Republic, cement exports from the country rose by 30 percent in 2012 compared to 2011, the report added.

Iran produced over 70 million tons of cement in the past Iranian calendar year, which ended on March 20, according to global cement industry officials.

Iran's cement output will reach 75 million tons by the end of the current Iranian calendar year. Iran is also setting-up a major cement plant in Basra province in neighbouring Iraq. The project will cost around US$245m with an opening date set for 2015 and will create thousands of jobs under the supervision of Iranian engineers. Cement produced at the plant will be exported using Iranian brand names.

According to the report the country's cement production capacity will reach 110 million tons by 2015.