The Rumble On The Rails--USA vs IRAN Wrestling Match

The USA and the Iranian wrestling teams are taking part in an exhibition match at the NY grand central station as part of the joint effort to show the IOC how popular the sport  of wrestling is and reinstate the game as an Olympic sport.

The IOC had decided to exclude the sport from the 2020 Olympics but left the door open for wrestling to be reinstated in September of this year as the IOC decides what sport to add to replace wrestling.

Of note, the Iranian wrestlers did not interact with the media today and the only statement to the media was given by the team manager through an interpreter.

This is one instance were the USA and Iran are "fighting" on the same side. 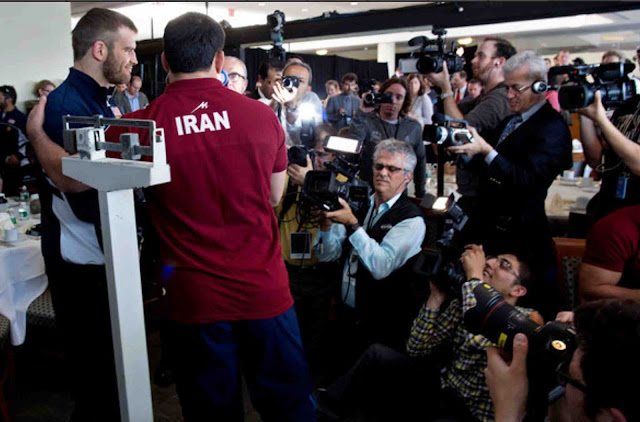 Kyle Dake who gave the USA team its only victory yesterday, joked "It was really loud in there. Feels like we were in Tehran," (AP).

The next exhibition match between the USA and Iran teams is scheduled for Sunday in Los Angeles, aka Tehrangeles. For tickets
http://www.ticketmaster.com/USA-vs-IRAN-Wrestling-tickets/artist/1867720 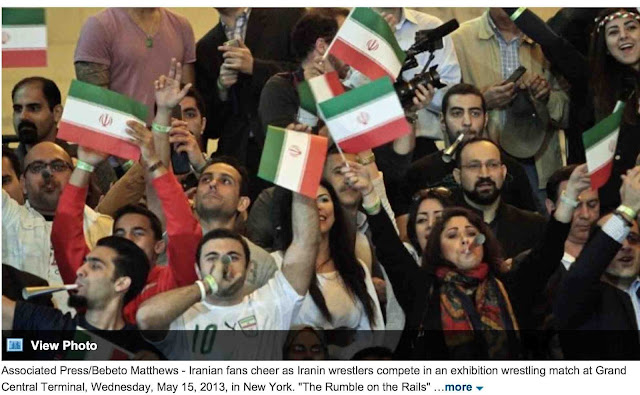 Email ThisBlogThis!Share to TwitterShare to FacebookShare to Pinterest
Labels: IOC, May 15, NYC, The Rumble on the rails, united 4 wrestling, USA vs Iran wrestling, Wrestling diplomacy

Team USA vs. Iran live in 1 hour 15 mins from this post time at this URL:

Jabbar is back; after suspicious absence or may be the longer vacations, and Mark is assisting him again.

Was this Jabbar's absence connected to "special assignments", which included "organization" of that wrestling match?.

It is good that US has recognized it is better to wrestle with Iran in friendly matches rather than a swan song war.

War with Iran, it appears will simply not happen

It is increasingly apparent that there is no appetite in either the United States or Israel to go to war with Iran by "attacking" the Iranian nuclear facilities. Both have recognized that the Iranian nuclear program is too far advanced and well defended to be tackled militarily in an already destabilized and hostile region.

For now, the June elections in Iran are used as a reason not to attack, on the grounds that the intentions of the new government should be ascertained first, even though the contest will be between clerical hardliners and non-clerical conservatives, all part of the Islamic Republic establishment.

Recent warnings by Russia and China against any foolhardly military confrontation with Iran has even dampened the war lust of the neo-cons and AIPAC. Iran's steadfast support of its Syrian ally and the uncanny ability of President Bashar al Assad to overcome the Wahabbi led destabilization effort has also dented the prospect of any military adventurism against its Iranian ally. The recent lukewarm UN General Assembly support for the US,Saudi and Qatari led resolution against the Syrian government has put an end to any regime change speculation in Syria. It is quite apparent that the Russians, Chinese, Indians and the majority of world's nations will not support even a limited conflict with Iran.

Good to see a flowering of grassroots cultural and sporting contacts between the two nations .... and ..... a warm welcome back to Jabbar.

A-F Cynicism would not do you any good, you need to open your mind to opposing views.

You seem to have a personal grudge with Jabbar, don't you ...?

P.S. Happy to see the reappearance of Mr Fazeli

reader at 3:58AM- you have to read more different sources such as the RIA Novosti and Mehr News Agency and etc in order to make any judgments.

I am open to opposing views, but not to double standards and discrimination on this blog, as well as to manipulative propaganda by the authors on this blog.

They try to ridicule me, as it was done at the article with the new Rasht's airline terminal photo, where they (authors) haven't had a courage to post my May 9 or May 10, 2013 response to their ridiculing comments.

If you have access to the last year articles on this blog, you can open your mind and assess sincerity of author's statement that says:
"This is one instance where the USA and Iran are "fighting" on the same side". (note that USA, in author sentence, is on first place!)
However during those previous years comments; by my understanding, the author Fazeli was very worried that the US and israel cannot come to terms, about launching a war against Islamic Republic.
Another author was also worried that the israeli and US relations "sunk" to the lowest levels in the recent history.

Because you have used some specific words in previos article, I would like to inquire who "blesses" your leaders, you meant in that article?.

Like I have noticed your friends on this blog don't recognize Islamic believes and even blog owner made jokes about Jesus in the past, with Mark's presence...
so who else might "bless" leaders of your means? (Moses, Budda?)

You have made a "warm' welcome to the author Jabbar, who apparently is back in order to affect and "moderate" discussion about Iranian elections (abuses, hoaxes and frauds?) according to his previously "done" homework. He has apparently started from sport's issues as a warm up.

It is quite true that the authors of this blog practice selective censorship to silence viewpoints that don't suit their agenda. It is quite sad actually, since any attempt to stifle alternate viewpoints weakens the validity of their ow arguments. Perhaps, operating from the US police state they have learnt the worst.

My use of the word "bless" seems to have hit a cord in your system. My religious beliefs is a private matter to me but be assured that I am a run-of-the-mill Iranian of the same heritage as you. I don't want to accuse you of having a "Spanish Acquisition" type of mentality but unfortunately the gest of your comment gives that impression.

May your god bless your soul.

As I said before, some of my previous comments also disappeared in a black hole. This is probably to do with Spam catcher than any malse on behalf of the authors of this blog. If you don't see the yellow highlighted phase at the top of the comment box immediately after the posting, it means that something is gone wrong with your Internet browser connection and you need to try again.

It’s worth repeating again that we do publish opposing views, opposing to the views of authors and other commentators. In fact we welcome that, seeing it as a sure sign of the health of this little blog. What we don’t publish are the comments that are above anything else personal attacks on other commentators and the authors. Those kinds of attacks do not create a healthy atmosphere for debate. Fortunately their numbers are very, very few, and going down, and normally practiced by a handful of commentators. So, let me again invite all to publish opposing and contrarian views on any subject under discussion. Let’s stay away from personal attacks and judgments of character of other commentators and others. Thanks and keep on posting!

On Spam catcher issue, I second reader’s comments above and the suggestion on how to make sure that your comments are sent to our inbox. Thanks.

allow mine to come though then!!