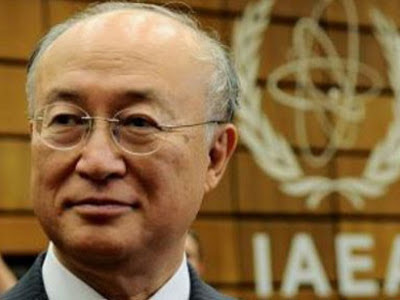 I wouldnt trust that biased little creep as far as I could spit him,hes the iaeas equivalent of richard butler

After 4 years in the rein, Amano has not a single notable achievement to his credit.
He has turned the IAEA from a technical institution into a political body to serve the interests of the main nuclear power countries, with USA and Israel as the main
beneficiaries. While ElBaradei constantly sought a diplomatic solution, Amano keeps hitting Iran hard with unproven allegation based on dubious intelligence reports from CIA and Israeli Mossad. He chooses not to see the formidably destructive white elephant in the room, but keeps his lens on the shadows on the wall. If a war happen, he will be the prime culprit.

helping to erect the sanctions imposed upon the Iranian regime IS a notable accomplishment.

helping to erect the sanctions imposed upon ordinary Iranians IS NOT a notable accomplishment.

sorry reader, but the sanctions weren't imposed upon ordinary Iranians. those folks are feeling the trickle-down effects of their "government's" misdeeds and dishonesty.

nope. Iran DOESN'T have every right to uranium enrichment, friend. Iran has specifically alienated the right to enrichment for certain purposes and has agreed to restrictions on those rights and to inspection by the IAEA.

therefore....... your comment was incorrect and you're a puppet of the dishonest theocracy.

AnonymousMay 19, 2013 at 7:35 PM
Actually my friend iran has every right to enrich,its an inalienable right that was not granted by the iaea,the npt or the so called "international community",iran by signing the npt agreed to some restrictions on nuclear development in return for access to nuclear assistance and technology,it never received any of this also many would argue that the nuclear armed states have not lived up to their obligations under the treaty.The sanctions are politically motivated and are hurting ordinary iranians in a desperate attempt by the west to pressure iran,its sad that you seem to delight in gloating over this,it also makes me wonder how old you are,12?,becase you sound like it.Amano is a puppet whos appointment has only served to discredit and weaken the iaea and the npt,once again the west in a misguided and increasingly desperate attempt to try and hurt iran has not bothered to consider the long term consequences of its actions,in this case the harm its doing to the iaea and its hard won credibility,the work of consummate professionals like Mohamed ElBaradei is being discredited and squandered

your logic and understanding of treaties and contracts are deficient and Iran remains bound by the treaty that it signed and all codicils.

as well, you might catch up on what El Baradei has had to say since he stepped down about Iran's failures to comply.

Anonymous May 19, 2013 at 9:10 PM
El Baradei did not step down,that is an absurd statement with absolutely no proof to back it up,he completed his 3rd term as director general of the iaea and did not seek a fourth term,by comparison the election of amano required several rounds of voting to achieve.Treaties cut both ways imposing obligations on both parties,the iaea and the nuclear powers have not lived up to their obligations both to the treaty and to iran,iran has the right to withdraw from the npt at any time it wishes indeed I think it only stays because the costs of staying are less than the costs of leaving

The real image of the world's Zionists of the U.S., Israel, West and Middle East as which obviously can be scanned hiding just right behind the grand appearance of 'Amano, the IAEA-controlled Puppet'. What a double standard jap!

Iran has the right to withdraw, son, but doesn't have the right to stay in the treaty but fail to comply with the terms.

Iran has complied with its obligations despite the best efforts of the amanos of this world,treaties cut both ways and iran has done a far better job of abiding by it unlike its western enemies or the iaea under amano who has failed to live up to its obligations to iran

Iran has not complied with its treaty obligation.... and the entire world knows that..... Iran is sanctioned for its dishonesty and dereliction.

Its sanctioned for purely political reasons that have nothing to do with irans nuclear program and the whole world knows this,the genuine international community gave iran it unanimous support for its nuclear program at the non aligned conference in tehran,one only has to look at the enormous effort the us expended first in a failed attempt to unseat ElBaradei and then through several unsuccessful rounds of voting before finally getting their hand picked puppet into the top job at the iaea just so they can try and put further pressure on iran even if they have to destroy the iaeas credibility to do it,irans commitment to the treaty despite the lack of reciprocity has been nothing short of exemplary

and the Russians, Chinese, Bosnians, Nigerians, Ugandans, Japanese, French, English,Mexicans who all voted for the sanctions ......

they've all in it for political reasons..... everybody is just picking on poor Iran.

that's the crap you're trying to peddle?

If you dont like the truth that is not my problem,you have not produced any evidence to back your claims of irans non compliance with the npt or that the sanctions are non politically motivated,the simple truth is that iran has an inalienable right to enrich,the iaea should not have transferred irans file to the security council and the council has no right to demand that iran stop enrichment much less impose sanctions on iran for failing to do so,as for those who voted for sanctions the only ones that mattered were the 5 on the security council as far as the rest were concerned they either followed the orders of their "masters" or were paid bribes or favors to get them to go along with it unlike the 120 nations of the real international community who unanimously supported irans nuclear rights.Iran has gone above and beyond what was required under the npt even halting enrichment and voluntarily adhering to the additional protocol and the Subsidiary Arrangements until they realised that the west was not serious about acknowledging irans nuclear rights or negotiations in general.In the future you might want to educate yourself before posting on topics on which your knowledge is clearly limited,eres a link that may be of some help to you
http://en.wikipedia.org/wiki/Iran_and_weapons_of_mass_destruction