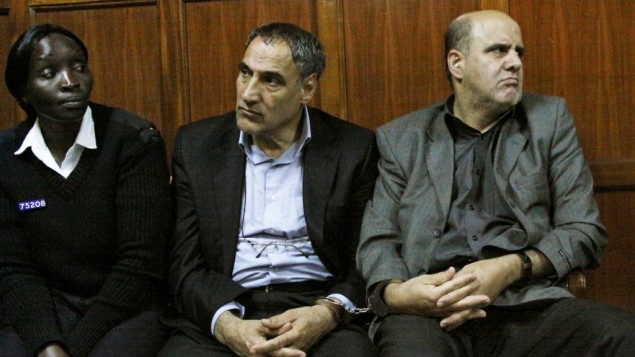 UPDATE: The Kenyan court on Monday 6 May sentenced the two Iranian men to life in prison for planning to carry out bombings in Nairobi and other cities last year. (Reuters)

Two Iranian nationals, Mansour Mousavi and Ahmad Abolfathi Mohammadi, were found guilty Thursday by a Kenyan court of plotting to attack Western targets inside Kenya. They were arrested last June and reportedly led the officials to a 15-kilogram (33-pound) stash of the explosive RDX.

Magistrate Kaire Waweru Kiare said the prosecution “has proved beyond reasonable doubt all counts against the two.” Kiare will sentence them on Monday. Prosecutors had accused the two of having explosives “in circumstances that indicated they were armed with the intent to commit a felony, namely, acts intended to cause grievous harm.” (AFP, 2 May)

Kenyan security officials had claimed the two Iranians were members of IRGC’s Quds Force.  “The police have information that the applicants (suspects) have a vast network in the country meant to execute explosive attacks against government installations, public gatherings and foreign establishments,” Police Sgt. Erick Opagal, an investigator with Kenya’s Anti-Terrorism Police Unit, in an affidavit.

The two Iranians arrived in Kenya on June 12, 2012, and traveled to the coastal city of Mombasa on the same day to receive the explosives, Opagal’s affidavit said. They traveled back to Nairobi after receiving the explosive from an accomplice who is still at large, it said. Opagal said the two were arrested on June 19 in Nairobi and led officers to some of the explosives hidden at a Mombasa golf course.

one can only guess that the Iranian agents with the explosives were not going to actually themselves try to blow up people and things, but were going to do what the cowardly iranian agents generally do and to dupe some locals into doing the dangerous stuff while the Iranians pretend that they're just people on vacation.

The face of IRI terrorism. What happened about men not touching women?
The Nigerians have a sense of humor :o)

Kenya is a JOKE where machete wielding savages kill hundreds on tribal basis and now this farce at Zionist/US behest. This is just another propaganda war effort against Iran. It has nothing to do with reality. No one is buying this crappola anymore.

Do you live in reality?
Doubtful.

I hope they rot in jail.

Silly anti-Iran ranting fools. These are middle-aged businessmen and have nothing to do with the false accusations. It is normal practice in savage Africa to blame businessmen, particularly Muslims of "terrorism" if a corrupt black business partner does not get his cut. Kenya is a British colony and it is used as cannon fodder by the Brits, US and Zionists in Somalia and rest of East Africa. At least open your eyes and see how old these poor guys are!

Doesn't make the "poor guys" less guilty just because they go under cover as "businessmen".

Kenya is a country in eats Africa that attained its half independence from BRITAIN.The country is the biggest economy in east and central Africa and is a hub of activities starting from deals touching on minerals from the great lakes region to a corridor through which goods from Dubai and the west reach their destinations in the region.
The founding father of this Nation build a culture of impunity and shortchanged his countrymen colluding with the colonialists to deny the masses land.
in the 2007 the votes were rigged in favor of Kibaki at the behest of Britain denying Odinga who had promised to make a Zimbabwe by sizing land from absentee landlords and give it to the natives.-He was rigged out in 2007,and denied an open victory on the recently conduced polls in march!----this is Kenya a Nation that is AT the mercy of BRITAIN- a CANADA in black Africa.

When the Iranian president last visited the country,many trade agreements wee signed b\tween the two Nations.President Ahmadinejad proposed to the Kenyan government that Iran helps Kenya in packing its tea and coffee in the country instead of exporting it raw and that the Kenyan government to invite it and electronic giant brands to build an assembling facilities in Nairobi.Iran promised to supply the African country with crude and some others things touching on cultural exhibitions.

Oil industry in Kenya thrown into a spin

the good news about Iran's crude prompted the shilling to gain against the dollar!.-Kenya oil industry is in the hands of Britain and France.-oil SHARKS new the danger on this development,they would loose out!1.an EXPERT WAS HIRED TO GIVE SOME RECOMMENDATIONS ON THE Iranian CRUDE and clarify the Government position!=this is what the 'expert' said-'the deal has been cancelled because we have learned that IRANIAN CRUDE is too expensive to refine an d that it leaves useless residue behind!!!!!.the agreements died in the books and this explains why there had not been a visit by IRANIAN OFFICIALS IN Kenya.

after giving out food and tents to the Somali transitional goverment, IRAN help in stabilizing Mogadishu!after this help,the troubled Somali capital was safer !this is while the 'beacon of democracy was busy targeting villagers in the remote parts accusing them of threatening the security of the US[AL QAEDA ].

NOW these guys are innocent men. the ranting by the KENYAN court prosecutor that 'the Kenyan police have done a sterling job for arresting these dangerous IRANIANS ' was just a confirmation that this was a cook up charge to ward off IRAN IN the reconstruction of SOMALIA .

well sorry Guys for the typos and half baked sentences!-sorry indeed.