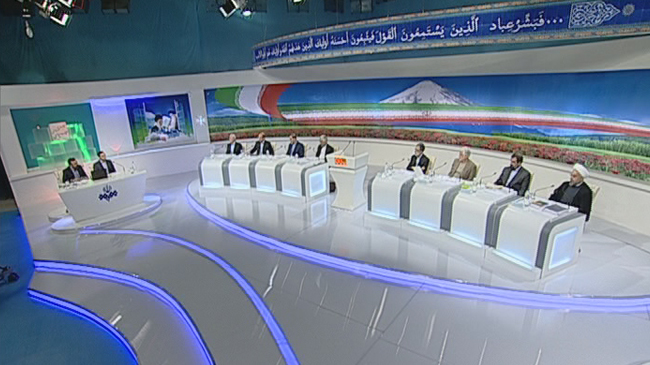 The eight men who were selected by the Guardian Council last week to run for president in the 14 June election are holding their first televised debate today. The debate started moments ago and the candidates will each respond to a series of questions on the country’s economic situation, its nuclear program, relations with the West and a number of domestic issues. Two more televised debates are scheduled for Wednesday and Friday.

The eight chosen candidates are:

UPDATE: This is becoming not a good night for state TV. In the second part of the debate, the moderator asked seven questions with multiple answers, like the standardized tests at schools, and the eight chosen candidates had to answer either yes or no, or choose one of two or three options, like choosing A, B, or C in a test. They could not offer explanations why they picked a particular answer, and could not debate among themselves. At this point, the candidates started to object, some quite angrily, to the format of the debate, saying it was more suitable to testing students than starting a debate among eight people, one of whom will be the country’s president in three weeks. Not surprisingly, most of the answers to questions in this part were, “The Question is Wrong!” This is not going well!

UPDATE 2: The debate finally got into issues, although many candidates still not happy with the format. One of the best reports on tonight’s debate is filed by the Christian Science Monitor’s Scott Peterson.
“In a marathon four-hour debate on the themes of economic “justice,” failing trust in government, and current mismanagement, the mild-mannered men criticized present and past administrations but did not put forward their own concrete plans,” Peterson reports.

I thought there was only seven dwarfs?

I thought you were going to make a serious comment for once, unfortunately I wash wrong.

At a first look I have got impression that candidates have better conditions than those for US election candidates and the interviewers are not the "Zionists" or their servants.

The Supreme Leader's guidance was that there should be no personal attacks, and this first debate is a kind of warm up and intended apparently to inform general public in an "easy way".
Candidates can present their detailed views during their other alloted times on TV or radio broadcastings for more concerned voters...

No matter which of these patriotic and highly qualified candidates wins, they will be inheriting the top leadership of a very rich, resourceful, united and powerful regional superpower. Even Iran's mangy enemies now acknowledge its unassailable military and strategic power. IRAN PAYENDEBAD.

Iran now has enough long range missile launchers to send a salvo of medium range ballistic missiles that would overwhelm Israeli ballistic missile defense systems, according to a Wednesday report from IHS Jane’s.

A May, 26 broadcast on Iranian television showcased a collection of transporter erector launchers (TELs) capable of launching the Iranian Shahab-3 guided ballistic missiles.

“Iranian television footage showed at least 26 TELs lined up in two rows for the event, which marked their purported delivery to the Islamic Revolution Guards Corps (IRGC) Aerospace Force, which operates the country’s ballistic missiles,” according to the report.

The Shahab-3 is an advanced missile based on a North Korean and Pakistan's Ghauri design and is capable striking Israel from deep inside Iranian territory.

“The delivery of such a large number of missile launchers demonstrates the Islamic Republic of Iran’s self-sufficiency in designing and building the strategic system and shows the Iranian Armed Forces’ massive firepower and their ability to give a crushing response to the enemy,” Defense Minister Brigadier General Ahmad Vahidi said in a report carried by Iranian state news.

The more missiles Iran can launch at once, “the greater its chances of overwhelming defensive systems, such as Israel’s Arrow, which only have a limited number of interceptors ready to launch at incoming targets at very high angles,” according to the Jane’s report

Israeli Arrow and Iron Dome are a joint U.S.-Israel BMD system which saw its first deployment in 2000 and funded by US government.

Looks to me that the Zionist pip-squeak goose is more or less cooked, and hence they have lately STFU!

You forgot to count yourself.

I watched the whole debate and only Qalibaf and Jalili looked Presidential.

Qalibaf, who enjoys a reputation as a pragmatist, gave some of the most specific policy plans.

His government would increase the independence of the central bank, attempt to grow Iran's service economy, for instance in the information technology sector, and refrain from hasty decisions that create instability, he said.

The rest of the candidates sparred with each other and the moderators without any real policies.