The Approved Candidate List Is Now At The Interior Ministry 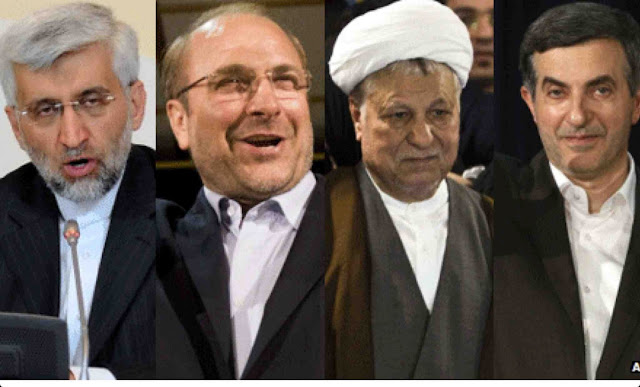 By: Jabbar Fazeli, MD
Kayhan reports that the guardian council has handed the interior ministry the list of vetted and approved candidates for this year's presidential elections (1). 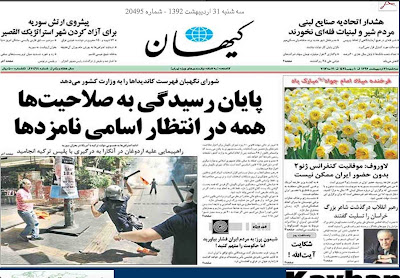 The candidates are allowed to officially start campaigning in 48 hours and so the public announcement of the list of names  is likely to come within that time frame.

The spokesman for the guardian council, Kadkhodai, in public comments, has hinted at the disqualification of Rafsanjani based on age. He concedes that the law does has no upper limit on candidates' age, but also stated that any person pursuing an important public office needs to be able to work for more than a few hours a day.

The chair of the guardian council is 86 years old and the council is arguing that Rafsanjani is too old at 78; only in Iran!

Mr. Mashai, Ahmadinejad's protege, who is often referred to as the "deviant", is unlikely to make it to the approved list but he promised to pursue an "appeal". Its is unclear how he would pursue such an appeal, as the list is final and the only person allowed to alter it is the supreme leader.

If the above candidates are disqualified then the remaining major candidates would be Jalili, the lead nuclear negotiator, and Ghalibaf, the mayor of Tehran and ex-security chief. The first is close to the supreme leader and the later being the closest candidate to the IRGC. A win win for the regime. In such scenario the IRGC would not have to resort to further "election engendering" (2) to get the "right candidate" elected.

It is noteworthy that a total of 686 candidates were registered for this presidential election, including 30 women. Democracy by volume since the other elements of democracy are lacking.

The guardian council announced the disqualification of all women based on gender "in accordance with the law". This term is used loosely in Iran as is the case here; there is no mention of gender in the election law (3).

I am including the list of qualifications of candidates and voters per the Iranian law. They basically require citizenship, loyalty to the regime and the official religion (Shiite), which technically means non-Shiite Iranians don't qualify. Other qualifications are basic, such as the last item listed on the voter qualifications; It basically says the voter has to be "not crazy". 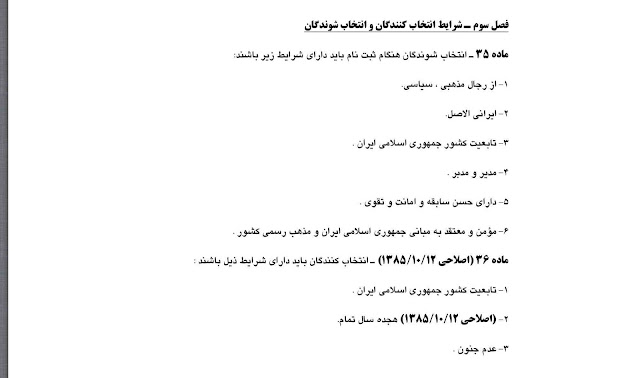 As you can imagine, the Iranian public are dying to know whom they will be "permitted" to vote for to give them four more years of Khamenei rule.

Photo credit: BBC
Posted by Unknown at 10:05 AM

Evidently, Jabbar is unaware of the appeal process, something successfully effected in the past. That would likely take place between May 22 and May 24.

The regime fights only for its own naked survival; they have abandoned the economy, the people , the future of the country - not to mention the idea of political legitimacy of their system and the accountability of their policy ...

The whole thing is a joke. I think IR shows that it can't be reformed and people should pay the price and destroy it by force. It is sad but it is true.

The vetted candidates are: Adel, Jalili, Rezai,Rohani, Ghalibaf, Gharazi, and Velayati. Rafsanjani and Mashai were not vetted according to above source.

Mark, there is no appeal process to the decision of the Guardian Council. Those decisions are final. However, the supreme leader is empowered to issue "State Edicts" on any subject he desires, practically a veto power on any decision made in the country, including overruling the GC's decisions. Khamenei has once overruled the GC and allowed Mr. Moeen to run for president, but there are no other precedents here.

I cannot believe that we are discussing Iranian elections as if it would make any difference who is elected. Let's not forget that Khatami having won 85% of votes could not do a damn thing and back then Khamenei was not as powerful as now. We are talking about rearranging the chairs on the deck of Titanic.

There's only one solution left then, Khamenei and his minions have to be removed!!! The people in the military must perform a Coup D'etat!!!

thank you for correcting yet another in the long list of untruthful assertion from Pyruz.