The USA wrestling (association) announced yesterday that the visiting Iranian wrestling team canceled their plans to participate in a second friendly exhibition game scheduled for Sunday in Los Angeles, USA, and returned to Iran. No reasons were given in the USA wrestling statement.

"We have been informed by the Iranian Wrestling Federation that the team's schedule has changed and they have departed for Iran and will not compete in the United 4 Wrestling event in Los Angeles on Sunday" (1). 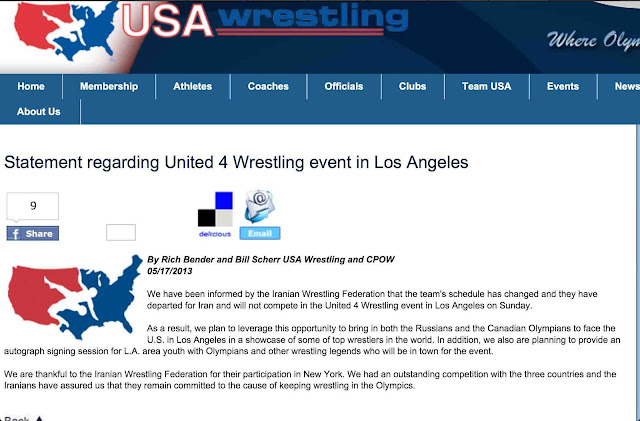 The news was first carried by the Iranian website Khabaronline (خبر انلاين) yesterday. That report stated that the reason for the premature and hasty departure of the Iranian team was that the US police refused to provide security (2). 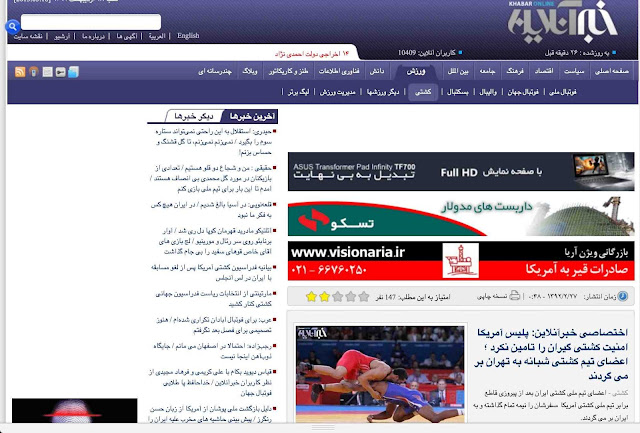 While bizarre, this drama is consistent with the Islamic Republic's erratic behavior we all have come to expect.

This decision to recall the wrestling team is consistent with the one dimensional thinking in Iran's foreign policy where hating America comes before the interests of the country and the nation as a whole.

The image of Iranian wrestlers having a friendly game with wrestlers of the "great Satan" may have proved to be too much for the regime in Iran.

So far, there is complete media silence in Iran on this issue. It appears that even the regime's own propaganda machine is having a hard time spinning this one on such short notice.

"This decision to recall the wrestling team is consistent with the one dimensional thinking in Iran's foreign policy where hating America comes before the interests of the country and the nation as a whole."

Evidently Jabbar is unaware of the numerous times the Islamic Republic has extended itself toward the U.S. in hopes of better relations, such as...

1) Rasfanjani's attempts while president to engage U.S. interests with business deals in Iran. Of course, this was shot down by the U.S. leadership.

2) Iran's cooperation with the Bush administration during the planning and initial phase of Operation Enduring Freedom in Afganistan, again made in the hopes of improving relations with the U.S. Of course, Iran was "rewarded" by being branded part of the "Axis of Evil."

3) Khatami's attempted grand bargain with the U.S. put forward through a fax to the Swiss embassy. Of course, the Bush administration ignored the outreach.

And yet folks like Jabbar, harboring an obvious grudge against their former homeland, are only too eager to perpetuate the myth that in Iran "hating America comes before the interests of the country and the nation as a whole."

Neutral, informed observers know better than to fall for this hype, now best exposed in the Leverett's new book "Going to Tehran".

Jabber is better suited to Debka and sensationalism. The main reason is Iranophobia and demonization of Iranians in the Zionist controlled US media.

Iran wrestling team cut US trip short because police didn't provide adequate security and there were threats against the and the crude level of Islamophobia in the US redneck police state.

Well said Mark, but it would be even more credible of you posted it from inside Iran. You should move there

What really happened was that the Iranian team won its competition with 6-1 and was also ready to move on but the constant harassment by the MKO with posters of a lady terrorist recently endorsed by Washington and even women of this organisation becoming access to the Hotel rooms (with security escorts) was a bit too much.

Since the presence is monitored and these gentlemen wrestlers had no permission to move freely, they were constantly escorted and taken to places full of these people (partly the same group bussed around to harass and bully and insult these sportsmen)

Upon asking for more protection, they were informed sorry that's about as much as you can get. It looked like a staged masquerade. As Iranians told them it would mean their security is constantly compromised, they were told to take it or leave it.

Azariby fortune and Iranian by Grace of God
Dariush London

IT is your line of thinking on the regime that is erratic!.

Iran-US wrestling matches were hopeful signs of continued warm relations between the peoples of the two countries, if not their governments. Cancelling the match in Los Angeles because of fears of opposition groups waving non-official flags in the stadium and chanting against the Iranian government was a stupid move by the wrestling officials. The matches could go on. The problem is they want to control everything, including the type of flags waved and chants uttered that might not conform to their own political positions. What a disappointment!

A saga that reflects badly on the IRI establishment. A regime confident in its legitimacy can and should be able to ride out a tiny damage that could have been done by a few flag-waving and slogan shouting expats.

Certainly if the US team was in Iran as so often the case, Iranian security authorities would never allow any Taliban sympathizers to approach their Hotelrooms or line up enroute their transportations, let alone raise Bin Ladens photos.
..... Why not just accept the NYPD to have screwed up

The unprofessional rhetoric of the writer of this point is quite disappointing and characteristic of most of the posts written by him. دوباره قهر كردند! Seriously? I'm terribly disappointed. Have been visiting this blog less and less lately because of posts like this. I think I won't come back again.

NYPD had nothing to do with it, that's New York's police. The match was actually held in New York. The match cancelled was Los Angeles one, after the LAPD told Iranian officials that the police could not stop spectators from bringing their own flags, even if different from the official flag. LAPD was following the US constitutional guarantees of freedom of speech. The iranians should have ignored what flags were waived by the spectators and continued with their matches.They made a serious mistake.

the writer's comments are a bit stupid. The iranian government approved this trip knowing full well there would be friendly relations between the american and iranian wrestlers. This really is not an issue....the iranian government is not as stubborn and irrational as he seems to think, and they have in fact made many offerings for peace between the two countries.

I think the government is worthy of some blame...the right thing would be to ignore these expat idiots who bring their flags, and let the athletes play the sport. However, there is a great deal of blame to be laid on these Shah supporter morons who want to turn a friendly sporting event into a political issue

KM-hold your ground!!.
feel disappointed by the writer ?-let him him put his weak points open and give him some logical replies -readers are there to follow your replies.-indeed JF wears a garb of a democrat while in practice we get to see an unrepentant dictator who specializes in petty negativity!

Your blog, your facts !

The evil suppression of the desire and the wishes of the proud people of Iran by the mullahs cannot go on for infinity. As of now the rogue parasitic mullahs have the Iranian people in shakles. Some day the spell will have to break. The honored freedom loving people of Iran won't live under tyrannny for all eternity. The day will come when they are tired of being scuffled around and herded like mindless sheeps. It is exactly this kind of "anti-social" behavior directed by theological clergy that has turned the once prosperous nation of Iran into a secluded parah state. The Islamic establishment essentially declared war on the US in 1979 when it stormed and captured the embassy and held the staff hostage for 444 days. Iran has the potential to be one of the wealthiest nations on earth thanks to its natural resources and it can be up there with the greatest in terms of technological advancements by cooperating with other progressive countries in the Western hemisphere. All of this could only come to fruition when the enemies of modernity and progression get de-throned and cast aside into the dustbin of history. Remember folks, the mullahs went to war with the US back in 1979 and as such they transformed themselves into the arch enemy, and this is a conflict that hasn't ended.

Thanks BMA, but I advise you don't waste your time here either. This has gone beyond taking sides and it has turned into cheap blogging style of opposing Iran's regime.

I think instead of monitoring comments here, Mr. Uskowi should monitor his writers.

You have a great day and hopefully this website will graduate out of this anti-IRI rhetoric to a more serious journalism.