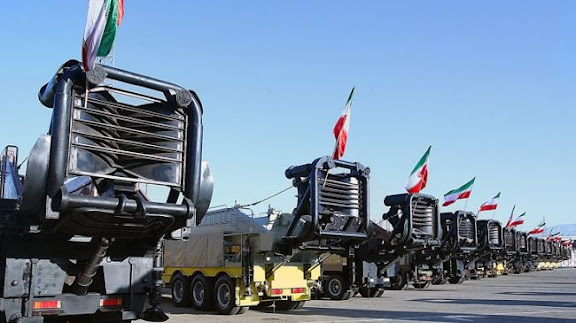 Addressing the ceremony, Vahidi said that the delivery of such a large number of missile launchers demonstrates the Islamic Republic of Iran's self-sufficiency in designing and building the strategic system and shows the Iranian Armed Forces' massive firepower and their ability to give a crushing response to the enemy.

There had been suggestions that a shortage Transport Erector Launcher (TEL) vehicles might be a limiting factor on Iran's ability to provide adequate chances of survivability for its missile forces in the event of an aggressor first strike. If so, this latest claim indicates an effort to address this need. Additionally, it could suggest or purposely indicate an increase in Iranian MRBM stocks. Even so, in the above photo provided by Iranian media, slight variations in these TELs are evident, suggesting non-standardization and some level of improvisation, in addition to slight universal changes interpreted as refinements in erector construction.

Below are examples of TELs exhibited in the past. Note the slight variations in design and construction: 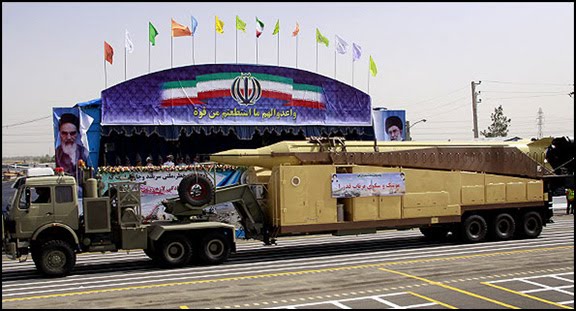 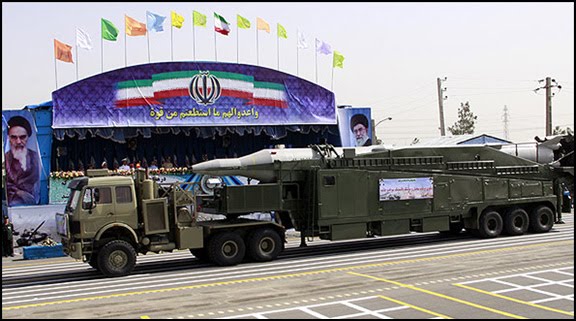 Photos: PressTV and Military.ir
Posted by Mark Pyruz at 4:02 PM

Iran is on a roll. God bless Iran and its military.

Looks to me, that the first photo shows more than 12 TELs and one have to remember that there are also Iranian missiles in their siloses...

The moronic "Western experts" know crap about Iran and get their pathetic fake "intelligence" from the Zionist pups in Tehrangeles, Toronto, Paris and other vested interest exile hovels. These aging and of touch self-hating absconding minority groups are living in a 1979 world of fantasy and feed the US in particular, total delusional nonsense to suit their needs. US is a police state and these "sources" feed the insecure egos of uneducated WASP and Jew bureaucrats in the CIA, Defence, State and other homeland insecurity freaks who then pass it as gospel truth to their Zionist masters. These "expert idiots" have been predicting the end of Iran for 34 years and now Syria for the past 3 years, not to mention their failure to acknowledge US strategic defeats and economic collapse from Libya to Pakistan.

Believe me, Iran is much stronger and united than most think. These fools don't understand Persian nationalism and the potent Shia religious mix. The Islamic Republic and the clergy have an intuitive street and bazaari understanding of the complex Iranian society and have successfully led it through wars, US/Zionist terror campaigns, economic sanctions and political pressure. More than any Iranian leader, Ayatollah Knomeini tailored his message to conform to the core values of Shia Islam, Persian nationalism and ingrained self-perception of Iranians as a great civilization superior to all in terms of their great contributions to humanity.

If you objectively look at Iranian history, regardless of political prisms, you will find that successive Persian monarchs, military leaders (Nadir Shah for one) and even nationalist democrats like Dr. Mossedegh perceived Iran as the epicenter of the region by the sheer dint of its size, illustrious 3000 year old uninterrupted civilization and a rich country with a manifest destiny to be a great power and lead the region.

I count 20 plus at one location, that should be enough to light-up Zionist hovels in a minute. Most intelligence estimates are that Iran has over 300 mobile and deep-bunker silo based launch sites for the the 3000kms plus Sejil and Shahab series. Then there are thousands of shorter range Zel-Zel, Fajrs, Ghadr-110, Ashoura and assortment of tactical missiles ranging from 75 kms range to 400kms enough to turn Saudi Arabia and the Persian Gulf petro-pimpdoms into glass camel grazing yards..

According to Jane's Defence Weekly, the Ashoura represents a major breakthrough in Iranian missile technology. It is the first two stage MRBM using solid-fueled rocket motors instead of the existing liquid-fueled technology used on the Shahab. This would dramatically reduce the setup and deployment time for the missile and hence, shorten the amount of warning time for the enemy. Jane's noted that while the development parallels Pakistan's Shaheen-II MRBM there is also evidence to suggest there had been prior technology exchanges or with its other known technology partners such as North Korea, Pakistan or China.

The new two-stage solid-fuel Ashoura and Sejil missiles has a range of over 2,500 km, it was tested on 12 November 2008. An improved version, the Sejjil-2, was tested on 20 May 2009. Improvements include better navigation system, better targeting system, more payload, longer range, faster lift-off, longer storage time, quicker launch and lower detection possibilities. US intelligence sources believe that Iran is developing a 3,500-mile (5,632 kilometers) range missile called Kosar/Shahab-6 and has tested it to launch satellites.

Iran has the largest and most diverse ballistic missile arsenal in the Middle East numbering into hundreds of thousands. Iran's Hezbollah allies now boast a missile inventory in excess of 100,000 missiles of all ranges and calibres.

The reasons that there are differences in the design of the TEL`s is because they are designed to carry different missiles such as the solid fueled sejil and liquid fueled shahabs/ghadr and qiyam,you can clearly see this in the two photographs.I`d also take the claims of the so called "experts" like Anthony Cordesman who claims that iran has only has a few dozen TELS and a couple of hundred missiles at most with a very large grain of salt,about a salt mines worth actually.

Anthony Cordesman is a senile fool who has never been to Iran or served in the military. CSIS is a Zionist funded organization and has one dimensional agenda, same as AIPAC.

Mark are you posting this from inside iran or from the U.S.?

There are couple important issues regarding Iranian TELs.
It is obvious that the enemy will try to "neutralize" them, before any attacks on the Iranian enrichment infrastructure and major command and air defenses centers.

That neutralization will be attempted, in addition to other methods, by special opereations forces, who may use Iranian military uniforms and laser weapons.
Other methods may include drones and an electronic warfare, in order to impair launches of those missiles...

Another important issue is a time for reloading of those launchers...

THANKS anon may at 12:48am!
A very good reading-however the end of it should have been-"Lead the world"

Foreign special forces operating near iranians' most important strategic assets... This is going beyond fantasy. they couldn't even try recover their captured RQ-170 in a remote desert of the country, now you expect them to identify hundreds of targets, infiltrate the territory by the thousands, approach each and every single asset and sabotage/destroy/paint it for airstrikes and then exfiltrate freely? Did you know Chuck Norris has been out of active duty since Delta Force ?

American Special Operations personnel have gone into Iran ever since the US invaded Iraq.

Yes, they were once invited by Iranian personnel from Al Quds on highly classified joint border operations against Al Qaida elements. For the rest I won't even dignify your claims and rather let you live in your fantasy world. Using iranian proxies successfully to kill a nuclear scientist is one thing, the regime if full of enemies from within, and so with reason. Being able to sneak up on hundreds if not thousands of sensitive military and nuclear assets, destroy them while out of sight and get out of here barely alive cannot be achieved in any other way than within the framework of a full ground invasion, friend. Wake up.

Super Agents lasing every single TEL spread over 1.6 square kilometers of territory, mountains, cities, roads, raw terrain, desert, forest, shores, islands, military bases, all at once and fast enough to allow a follow-on air srike, disguised as Revolutionnary Guards... mmmh... Did you even write that with a straight face ? Heard about the american debacle in the Great Scud Hunt against Saddam in 91 ? It was on a fraction of that space and arsenal, on a much less diverse environment and a world of contrast in terms of dissimulation, camouflage and deception efforts and means. Honnestly, may I ask your age ?

Home Front Minister Gilead Erdan warned Tuesday that Israel's Iron Dome anti-missile system is not designed to intercept a large barrage of hundreds of missiles in the event of Israel’s northern neighbors and Iran declaring war. The civilian population should be aware of the facts and prepare accordingly, he said in a comment at the end of the two-day Home Front war exercise. Zionists have calculated that highly accurate Iranian 2000kg warhead missiles armed with HE will devastate Haifa, Ashdod and Tel-Aviv, the major populated areas, and paralyze the struggling Zionist economy and make millions flee back to the safety of Europe and US. A full mobilization of Zionist reserves will cripple the tiny Zionist entity in about 3 weeks. The missile threat does not take into account the millions of free fire 122mm to 300mm rockets and low trajectory artillery pieces that Hezbollah, Syria and Iran can deploy. There is no defense in the world against artillery shells fired in flat to below 30 degree angle trajectory. This time the Zionists will face TOTAL WAR and they fully understand the fatal consequences. With S-300 deployment now the Skies over Lebanon and Syria are deathtrap.

On May 28, 2013 Deputy Foreign Minister S. Ryabkow; in addition to also critical words addressed to the West by the Russian FM Lavrov, said that Russia's delivery of the S-300....to Syria is a restraining factor against possible foreign interference....

The so-called west a euphemism for US/UK and French poodles in a strategic and economic straitjacket as they simply can't invade Syria on their own, but have to rely on cannibal Salafi terrorism which has proved too cowardly to handle the brave Syrian military and Hezbollah LIONS. Interestingly, the so-called Syrian opposition is now crying about "demanding" Hezbollah withdrawal from border regions around Qusair and Hezbollah has literally kicked the crap out of the Salafi cannibals. Just watch a few Youtube videos to see the Salafi cannibal terrorists flee in panic without shoes into fields as disciplined Hezbollah troops enter Qusair. It is a laugh a minute.