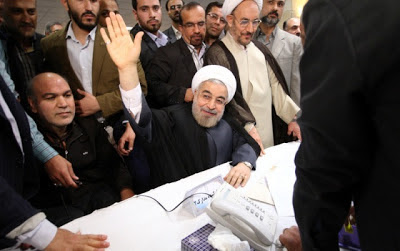 Today, Iran begins a five-day registration period for candidates in 14 June presidential election. It will be followed by another five-day period for the government’s Guardian Council to reject any of the candidacies on the grounds of lack of commitment to the ideals of the Islamic revolution and its supreme leader. The Council, stacked by ultraconservatives, does not need to offer any proof or even a rationale for its decisions, expected to be released on Thursday 16 May. The supreme leader can then veto any of the council’s decisions if he so chooses. The field of vetted candidates is then set for a month-long campaign that will end a day before the election.

Developments to watch in the next ten days:

•  Does Ayatollah Hashemi Rafsanjani registers to run for another term as president? If he does, and if his candidacy survives the Guardian Council, or approved by the supreme leader, then we will see a dramatic shrinkage in the field of candidates. The current moderates and reformists candidates will opt out in his favor, and the conservatives will unite behind a strong candidate that can have the best chance to challenge him in the election.

•  The ‘principlist’ (conservative) groups in this election are fragmented in an unprecedented way. Their leading Coalition of Three, comprising of Tehran’s mayor Mohammad-Baqer Qalibaf, supreme leader’s advisor Ali-Akbar Velayati, and former Majlis speaker Qolam-Ali Haddad-Adel, has been unable yet to name one of the three as its candidate. There is a small chance that all three would run against each other, unless Rafsanjani enters the race. Qalibaf is by far the most popular of the three and could present the toughest challenge to a possible Rafsanjani candidacy. Some conservatives, however, believe he is not conservative enough and his relations with the supreme leader could be as confrontational as his predecessor should he become president.

•  The Perseverance Front, most loyal to the ultraconservative Ayatollah Mesbah Yazdi, are likely to unite behind a former minister of health, Kamran Baqeri-Lankarani; although there are still talks of drafting Saeed Jalili, the country’s chief nuclear negotiator. The Front has little chance of winning the election, but they can influence the outcome by their dominance of the Guardian Council which can disqualify the leading moderate and reformist candidates.

•  The Coalition of Five is another principlist group that is committed to run a single candidate from a group of five former and current government officials: Manouchehr Mottaki, Mohammad-Reza Bahonar, Hassan Aboutorabi, Yahya Al-e Es'haq and Mostafa Pour-Mohammadi. The coalition is also under heavy pressure to withdraw from the race in favor of the Coalition of Three if the latter could field a single candidate to run against a unified moderate candidate.

•  The pro-Ahmadinejad coalition, labeled by the right as “deviationists,” wants to run Ahmadinejad’s political confident Esfandia Rahim Mashaie. The Guardian Council is expected to reject that candidacy, and no veto by the supreme leader will be expected. They could then close ranks behind another candidate like the former health minister Alireza Zakani. The coalition is strongly supported by those who benefited from Ahmadinejad’s large privatization program and by the less wealthy who benefitted from his monthly cash handouts as part of his subsidy reform program. Mashaie in particular could have launched a formidable campaign if allowed to run.

•  The moderates will likely settle on Ayatollah Hassan Rouhani, former chief nuclear negotiator, if Rafsanjani does not enter the race. The reformists have a number of minor candidates and no prospect of former president Mohammad Khatami entering the race. There are talks that as part of a grand coalition between the moderates and the reformists, Khatami might accept a high advisory position or the first vice presidency in a future Rafsanjani administration.

•  And there are also a number of independent candidates. The most prominent is former IRGC commander Mohsen Rezaie. He is expected to withdraw from the race if it shapes up to a two-man contest between the conservatives and the moderates. There are also talks of drafting Majlis speaker Ali Larijani as a compromise candidate of the conservative and the moderate factions to end further frictions between the camps.

If no one receives the 50+ percent majority vote on 14 June, the top two vote getters will compete in a runoff election a month later.

I show a more complex arrangement of alliances, some with different names than you're showing:

No worries. In the next ten days, the real names, the ones who have registered and been vetted, will be published. That list, if history is any indication, will be a much shorter list, probably a handful of candidates, with alliances much more clear cut.

Now, the sixty-four million dollar question is if Rafsanjani enters the race. If he does, the conservatives (‘principlists’) will most likely keep one single candidate in the race, and the strongest and most popular of all the names in their lists is the Tehran mayor Qalibaf. If Rafsanjani does not enter, then I expect at least three or probably four conservative candidates might compete in the first round, believing that the election will go into a second round, probably against Rouhani. And there is always a chance of a compromise candidate between the two camps.

I think you're wrong, conservative will try to set the scene as 84. with several candidates and by considering the fact that many people will not vote for Rafsanjani at any rate. There is good chance that in this case election goes to the second round between Rafsanjani and Qalibaf. However, if Khatami become candidate then there is more pressure on conservative. Another important thing is to see how Mousavi and Karoubi will react (if they can send something out) Any endorsement by Mousavi even for someone as unpopular as Aref would be a game changer. Also I don't think at any rate Conservatives can agree on one candidate. Mesbah camp is not very popular with more moderate and real conservatives. Ahmadinejad will try to have his own candidate at any rate since he is hated by both mesbah and moderate conservatives. Ironically, Ahmadinejad might prefer reformist to get the power (other than hos own party) since it is the only way for him to remain relevant in Iran's politics.

You're assuming the votes will be actually counted as casted asd this could be a very wrong assumption!