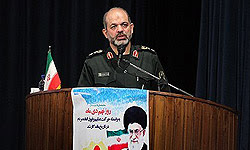 Gen. Vahidi was referring to attacks that shook Damascus today and believed to have targeted Iranian-made Fateh-110 missile storages.

Vahidi belongs in a cage.

Iranian "leaders" are sounding more and more like Baghdad Bob in their impotent threats and toothless boasts.

Talking of "impotent threats and toothless boasts", the zionist parasites and their American hosts still can't act on their military threats towards Iran.

the US hasn't threatened any military action against Iran unless and until the Iranians attempt to assemble nuclear weapons.


the sanctions that the US have imposed, on the other hand, are heavily constricting the Iranian economy.

I am as pro-Iran as anyone, but rationally speaking the only viable option that can safeguard Iran from the US/Zionist hyenas is to go nuclear. Iran simply can not defend itself conventionally and will be attacked eventually after Syria and Hezbollah are destroyed. DPRK is a classic example that if a nation has nukes no one will tangle with it. Even a totally failed state basketcase like Pakistan is surviving due to its nuclear deterrent as India which can destroy it in a few days in a conventional war simply does not want a war of mutual destruction. Only guarantee of safety in the US/Zionist jungle world is a nuclear deterrent.

Iran needs to cut back on boasts and do something real for a change.

the North Korean nuclear weapons have provided a reason to attack the North rather than defended it from attack.

Anon 2:53 PM, yes that's why no other state has invaded the DPRK! Is there a parallel universe in your head?

again, North Korea still exists only because of the Chinese..... and there's no other reason.... and no longer any reason to bother with their incompetent hungry and paranoid butts other than to keep these crispy critters from developing a functional nuclear arsenal before their regime finishes collapsing.

As I recall "kid", the USA has or any other state, has NOT invaded the DPRK since it developed nuclear weapons. You seem to live in an alternative reality where everything there is the complete opposite everything in the reality of everyone else.