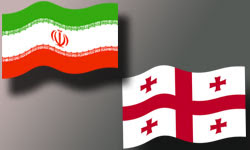 Iran and Georgia will sponsor the first conference and exhibition of economic and industrial cooperation in Tbilisi on 1-2 July. Over 100 industrial and service organizations and officials from both countries will attend the event. (Fars News Agency, 12 May)

Iranian nationals have invested heavily in Georgia in recent years, and Iran is now the top source of foreign investment in the country.
Posted by Nader Uskowi at 10:30 AM

I had posted before that there is a growing and very affluent Iranian business and professional community in Georgia, particularly Tbilisi. The University has over 6000 Iranian students, mostly in medicine, engineering and sciences, and vibrant Persian cultural activity. It should not be a surprise as Georgia and most of the Caucasus were part of Iran anyway. Iranians have started the weekly magazine Aryana printed in Georgia but it is written in Farsi. That is because it is catering to the growing number of Iranians moving here - since its launch seven months ago, its circulation has quadrupled.

The number of Iranians who traveled to Georgia increased by 60% last year, to around 100,000 per year. And more than 6,000 Iranians are now officially registered as residents in Georgia - a large number for a country unused to immigration.

Georgia, meanwhile, hopes the influx of Iranians will lead to an economic boost.

But the challenge is how to have a good relationship with nearby Iran while avoiding antagonising the US - Georgia's most important ally - and the EU, which Georgia wants to join.

"Georgia wants to belong to European and Euro-Atlantic structures but at the same time to have good relations with every neighbour," said Georgian political analyst Alexander Rondeli.

He argues that Georgia has to manage a delicate balancing act between nearby powers, who may have different political ideologies, and key allies, who are far away.

"In this region there are three regional superpowers - Russia, Turkey and Iran," he said.

But there are also strong cultural and historical links between Georgia and Iran.

Georgia was once part of a large Iranian, or Persian, empire.

Those influences can still be seen today in the architecture of Tbilisi's Old Town.

One old bathhouse is built in the style of a mosque and is covered with decorated blue tiles. A lot of the old houses here have arched windows and carved wooden balconies, so typical of traditional Iranian architecture.

And many Iranians have told me that Georgian attitudes, such as strong family values or an emphasis on hospitality, remind them of Iran. So they quickly feel at home here.
http://www.bbc.co.uk/news/world-europe-21974676