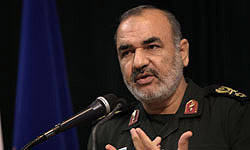 “Enemies want to deprive us of the nuclear capability, but we have today stretched our security borders to the Eastern Mediterranean,” Gen. Salami said.  ”The wheels of our economy have now gone past the enemies' plots and their tricks failed to stop our movement,” he added. (Fars News Agency, 4 May)

Gen. Salami’s comments are the most explicit expressions by a senior military officer of Iran’s power projection that goes beyond Iraq and encompasses the Levant; Syria, Lebanon, Cyprus, Jordan, Palestine and Israel.

Can I have some of the stuff these people are on :o)

Trust me,you wouldn't want to touch the stuff these guys are on !