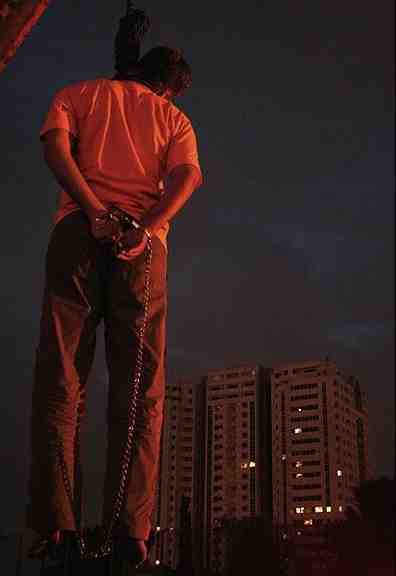 The Tehran magistrate announced that two Iranian men accused of spying for the Mossad and CIA were hanged today.

Technically the sentence was affirmed by the "Iranian Supreme Court", but despite going through all the motions, the authorities haven't even told us when and where the accused were arrested. Most media reports, including the IRNA English, doesn't even mention the accused names. The total secrecy has nothing to do with classified information as all judiciary cases are subject to the same secrecy. In most cases we only get the gender or the initials in Iranian media reports. I assume that is to minimize the chance of investigative reporting or "accurate" reporting on cases when a life hangs in the balance. 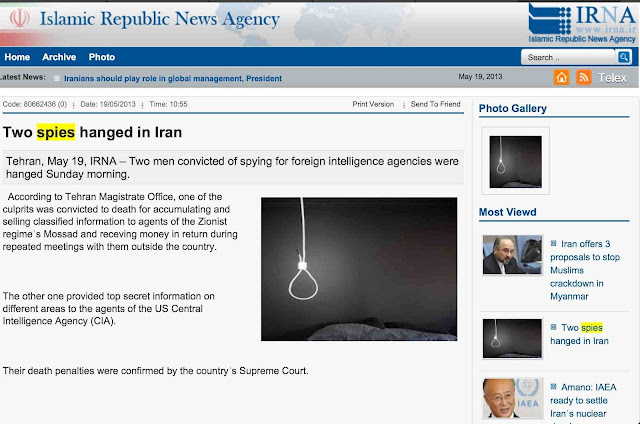 With this level of absolute secrecy it is impossible to judge the innocence or guilt of defendants, or hold the regime accountable to world standards or to the IR's own standards of justice.

The BBC reports the Tehran magistrate named the hanged men as Mohammad Heydari, and Kourosh Ahmadi.

These two hangings bring the tally on known hangings in Iran to 92 for this year (2013); That doesn't include most political prisoners and "separatists" hangings (4).

Secretly arrested, secretly tried, and secretly hanged, and oh yes, these two also confessed on TV (3) with the electric wires likely still attached to their genitalia.

Doesn't sound much different than any other hanging in the Islamic republic if you ask me!

Ps. Please note the impressive high rise in the hanging photo background. We should all be proud of the IR achievements!

Hanging spies is fine thing. There should be sever punishment for spying... specially by considering the fact there are many Iranian prone to become spy or enemy sympathizer.

Hanging is a barbaric act but punishing those who betray their country is an acceptable norm. There is no evidence to suggest that electric wires were attached to their genitalia. I cannot understand why you found it necessary to make this unconfirmed allegation. You also may have rushed in judgement as the details about these two individuals is to be released soon, see Farsnews report http://www.farsnews.com/newstext.php?nn=13920229001265.
The right to a fair and open trial is enshrined in in the Universal Declaration of Human Rights and these two individuals should have been given the right to defend themselves in an open court of justice.

This writer really is a moron

The guy in the picture looks like he's just "hanging" out.

yep,hes hanging around at the local hang out with all the other hangers on

BBC IN THE COURT ROOM?

@-was the BBC in the Iranian court room to take the names of the criminals?-i mean where did your Favorited source get to know the names? and what made you rush all the way to London to pick some 'accuracy' instead of getting them from IRAN?

@-oh! you want want to subject the Iranian judiciary to some international standard?-but i know you wont dare compare it to the Israeli justices in killing Palestine kids with sniper fire,OR -the judicial system practiced by the beacon of democracy-as practiced in the villages of Yemen and Pakistan-summary killings by killer drones! NOW DOES THE US give these SOULS some fair hearing in a court of law?

This is a hoax because author uses 2009 photo..

Fazeli drops "croccodile tears" and pretend to ask whether "regime" is accountable to the world or "even" to its own standards.

He pretends to care about "human rights" and peoples lives, but his true face can be found in his past articles, where he "prayed" on a weekly basis, for an agreement between the US and Zionist entity to launch a war against Islamic Republic in the 2012.