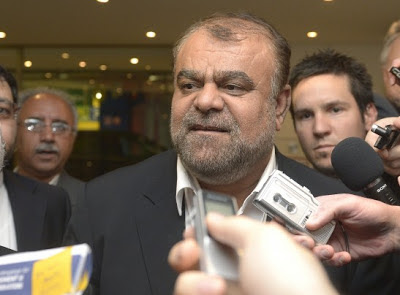 Iranian oil minister Rostam Qasemi said today its oil exports are down by 20 percent but asserted Iran is still producing the same amount of crude despite international sanctions. (AP, 31 May)

Qasemi made the comments in Vienna before attending a meeting OPEC’s oil ministers’ meeting. The ministers are to decide today if they wanted to keep the crude production target of 30 million barrels a day.

Reports by oil export research groups, as well as debates in Iranian parliament on the country’s next year’s budget, have indicated that Iran has lost at least half its crude exports in the past twelve months. The crude production has also been estimated at 2.5 million barrels a day — about 1.5 million barrels less than before the sanctions.

There is a definite disconnect between these figures and Qasemi’s insistence that the production levels are same as before the sanctions and the exports have been cut by just 20 percent. If true, Iran must have been exporting more than 30 percent of its crude through means other than oil tankers and to destinations unknown to the world. Or Qasemi could have decided to “expediently” not reporting all the facts.

Everything is hunky dory according to them.

Rostam indeed! this dude looks as tough as the Iranian military and is all set to rumble. No wonder the "sanctions" don't work on Iran. Does anyone in their right mind think that guys like this would be intimidated by anything or worthless sanctions?

of course it's not pumping the stuff out of the ground that sanctions is affecting.

it's selling the stuff that's been completely stifled. Iran can pump up all the oil is wants, but what's the point of storing billions of gallons of the greasy stuff?

no one cares if "guys like this" are intimidated,pal. all that matters is that they can stuck their petroleum up their backsides and rumble off the edge of the world.

Actually Iranian economy is increasingly diversified and oil is not as important anyway. The sanctions only "hurt" while dealing with western nations, and have had ZERO impact on trade with rising Asia where the world power epicenter is anyway. We have been hearing the same old "imminent collapse" of Iran nonsense for the past 34 long years and in the meantime Iran has become the predominant regional power.

Hasbara is obviously crapping in their wretched pantaloons these days eh..pretty soon an S-300 will indeed go up the cowardly Zionist backside. Mark my words.

anon 11:12 thanks for the specious nonsense. oil is CENTRAL to the Iranian economy and anyone saying otherwise is simply full of shitake mushrooms.

the sanctions have had major effect on Iran's sales to Asia and there's no way that a sane an honest and informed person would have made the claim that you did.

get a check-up and stop chewing the mushrooms.