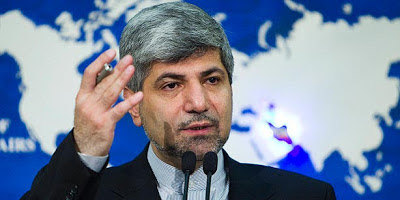 Iran has condemned the Israeli air strikes against Syria. The Israeli air force on Friday targeted a building at the Damascus airport that reportedly housed advanced Iranian Fateh 110 surface-to-surface missiles ready to be shipped to the Hezbollah in Lebanon. Today, the Syrian state TV reported another attack early Sunday morning on what it described as Jamraya research center, in northwest Damascus. The location had been targeted by another Israeli airstrike back in January.

Sure shut a lot of mullah lovers today.
Cat got your tongues?

Syria announced that israel and the West have been openly providing assistance to terrorist in an attempt to sustain terrorists' morale.

Syrian cabinet is about to hold a meeting, to prepare its response to the aggression.

By my judgment it is a begining to an introduction of the "no fly zones'" strategy.
For that kind of "no fly zones", the aggressors will try to gradually decimate Syrian missile air defenses and aircrafts later, as it happened in Iraq.

The US has apparently agreed, that israel will help; the anticipated expansion of the West's involvment, by attacking Syria first and then claiming that it has the rights to "neutralize" any potential carriers of chemical weapons (missiles) as well as any air defenses that might create obstacles to those "israeli rights" to "neutralize"...

P.S. Thanks for your response KM. I share your ideas ; regarding the Caspian Sea too and think that we have the same position, that it is for the majority of Iranian people to decide in that matters.
The Iranian people may have ceded that matters to the Supreme Leader or the Majlis for their guidance and authority to make proper decisions.

In supplementation of my previous concerns I would like to add that the goal of those airstrikes is to provoke Syria to respond militarilly and then the West will shed "crocodile tears" that Assad by attacking "innocent israelis" commits genocide requiring West intervention.

The second reason for that aggression, is to disturb Iranian elections, by the possibilities that Syrian response and zionists' continued attacks will pull Iran militarilly in.

From careful analysis of the situation, it looks like that first israeli attack; couple months ago on Jamaraya, haven't achieved sufficient results, since they needed to repeat that operation on the same place.
It has been reported that agressors' airplanes (during their first attack) came from the North and flew over the Syrian peaks of Hermon ridge at the low altitudes during the night.

The Syrian government knows many details such as the scope of damages and the kinds of methods utilized by the Syrian air defences to make the defensive attempts.
Therefore, any further improvement needs an analysis based on those data and advices of foreign experts; including Russia, China and even the NK, who will be keen to assist in that matter and learn something new for their purposes.

Syria is a test case for US/Zionists and if there is no retaliation then Iran itself will be attacked by summer. There is a simple rule that even children learn against schoolyard bullies, if you don't hit back then you become regular punching bags. The Arabs are used to regular humiliation but now Iran has put itself in a corner with these moronic boasts and threats. This is going to be an interesting year in the region.

All your points are valid, however, Russia and China will do nothing to support Syria. China has a lucrative arms trade with the Zionists and the arrogant warmonger Nothing Yahoo is visiting Beijing to sign further arms deals with China, which by its inherent nature is anti-Muslim considering their repression is Sinkiang (East Turkestan) and Uighur areas. Russia has been playing the Arabs for patsies since the days of USSR and is even more Islamophobic considering in mass genocide of Muslims in Caucasus. The only way the Arabs or Muslims will ever end their weakness and humiliation is by education and unity. There are too many corrupt puppet leaders and the masses are emotional, irrational and largely uneducated and prone to suicidal sectarianism. Without technology and education large populations are useless. The Arabs have been willing puppets of European powers since they wrecked the Osmani empire and created these pimp rump states from Lebanon, Jordan, Syria, Iraq to Saudi family pimpdom.

I am afraid the whole region is on a path to self-destruction. Iran still has time to extricate itself by chucking out the ignorant loud-mouth irrational mullahs.

They may sent their advisors to analyze and assist Syrian air defences...

" Syrian cabinet is about to hold a meeting, to prepare its response to the aggression."

and the response was to have Bashir announce that if Israel does it again, Syria may counter-attack, possible, maybe.

and without warning, too!!!

Anon 6:09PM
President Putin has made a call to Netanyahu, who was in China at that time, and informed him that Russia will take appropriate steps, including military ones, in the light of the recent aggression against Syria.

And I am interpreting it as a RED LINE for israel to make any future aggressions against Syria.
That recent Putin's drawn RED LINE, will have expanded consequences and in a practicality it also pertains to any attack against Islamic Republic.

Mr. Putin means it when he says something and Netanyahu will go to Moscow, next week, to "beg" Russia for... a cancellation of military deliveries to Syria.