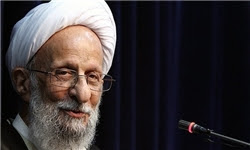 Ayatollah Mohammad Taghi Mesbah Yazdi, the spiritual leader of the ultraconservative Perseverance Front, today publicly endorsed the candidacy of Saeed Jalili for president. Mesbah Yazdi praised Jalili, saying he was hopeful that Jalili would revive Islamic values in the society. The ayatollah, pictured here, made his public endorsement after meeting Jalili for more than four hours today.

“I thank the Almighty for letting me live under a righteous regime that was led by Imam Khomeini and now his successor, a supreme leader that is following Imam Khomeni’s path… Our group evaluated the candidates on different factors, but supporting Islamic values were the determining factor for us… After Mr. Lankarani (who will not be on the ballot), we believe Mr. Jalili is the best candidate that represents the Islamic values… We hope he would be a good assistant to the supreme leader as well,” Mesbah said. (Fars News Agency, 28 May)

Mesbah Yazdi has never been shy about his own fundamentalist religious beliefs and teachings, famously repeating that in Islamic governments, the president and other elected officials do not, and cannot gain their legitimacy from the popular vote, but from the blessing of the supreme leader who acts as the representative of the Hidden Imam.

Mesbah has also said many times that the republican nature of the Islamic Republic is secondary to its Islamic essence; and has actually proposed that Sharia laws be the governing laws of the country. But most importantly, he is the leader of a very influential faction within the Islamic Republic whose thinking are closest to the Taliban and the Saudi Salafis, albeit their Shia Version.

Mesbah’s endorsement of Jalili and Jalili’s expression of joy from such endorsement might actually cost Jalili large amount of vote and further help the chances of the already popular Mayor Qalibaf of Tehran. After the disqualification of Rafsanjani by the Guardian Council, Qalibaf is considered the frontrunner. He would have received the votes of many moderates on both sides of the country’s political spectrum, who would have otherwise voted for Rafsanjani. Now, Mesbah’s spirited defense of Jalili could even push more of the moderate and pro-reform sympathizers to vote for Qalibaf in order to stop Jalili. Interesting election, full of intrigues and surprises; Stay Tuned!
Posted by Nader Uskowi at 2:32 PM

Well, the endorsement of Mesbah Shows to you that Jalili does not care about the vote of the People because he knows that this vote does not Count anyway; so I do not know why do you call this election then 'interesting' ...

Mesbah vs Gen. Soleimani (Qalibaf)? Who is stronger in IRan ?

Mesbah and many others also endorsed AhmadiNejad...

in political forums the people read A but Understand B
if the vote of people is not counted means the election is rigged and forged
unfortunATELY there is no evidence for this, else you will see immediately by Uskowi.
secod the Ayatollah Mesbah is a person of influence and have many supporter.
which can brings a lot of votes
I believe the US presidency canidate are doing exact the same

The election might not be rigged, why should it be? The Guardian Council has selected eight people, and the people are asked to select one of the eight. If the rulers still need to cheat on this election, it would be historic!!

This election is proving to be very difficult for IRGC senior officers. Tough and contradictory choices for them.

True, Mesbah endorsed Ahmadinejad. But what did Ahmadinejad do? He, and especially Mashaie, started to talk about the Iranian character of the Islamic Republic and the Iranian brand of Islam. But soon realized they had picked a wrong spiritual leader in Mesbah! And Mesbah was the first to turn against Ahmadinejad openly, and Mesbah took all the “Raypouyan Nour” rank and file with him, leaving Ahmadinejad without any organized base he could call his own. A general with no troops. Ahmadinejad lost the battle. Mesbah, if unchecked however, will put Islamic Republic at a corner to lose the war!

Jalili or Qalibaf, these are only two outcomes and both good ones from IRI perspective.

I meant the Election 2009 :>
I wating for years for evidences

You have failed to note Mesbah's first chice "Bagheri - Lankarani" who was "Aslah" on the earth and beneath the sky !!
He has no suddenly found another "Aslah" !! These people are clowns. The Pahlavi regim was critisized for much less of these circus acts but now under the pretext of Sharia and "Velayate Faghih" everything is ok.
China has replaced the US in stealing Iranian natural resources. The Russians have been fooling the Iranians with the "Nuclear reactor" in Shiraz but now Iran is not under the yolk of the foreigners becaus Khamenie and IRGC say so

All from the same old moth eaten cut cloth.