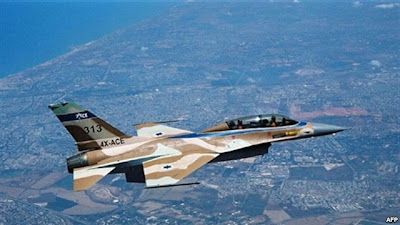 The Israeli air attacks on Damascus today targeted multiple locations in and around the city and was the second raid in 48 hours, signaling a sharp escalation of Israeli involvement during a bloody civil war in Syria.  Israeli Prime Minister Benjamin Netanyahu had in the past drawn a “red line” to prevent Hezbollah from obtaining new arms that could upset the existing power structure in the region. The delivery of Iranian-made Fateh-110 ballistic missiles to Hezbollah through Syria could have been regarded as crossing the line.

Al Jazeera quoted Syrian sources as saying the multiple strikes today hit targets in the Qudssaya area of Damascus, the arms depot at the Fourth Armored Division camp on Qasioun Mountain, a Republican Guard camp at Wadi Barada, targets at the suburb of As-Saboura, to the west of Damascus, buildings near the international airport believed to be used as temporary storage facilities, and a convoy reportedly carrying the Fateh missiles. On Friday, Israel had also hit warehouses near the Damascus airport.

Israel later deployed Iron Dome missile defense system in the north of the country. But as of yet, the attacks have not elicited any response from Syria, or its allies in Iran or the Hezbollah.

Military opportunism, the likes of which were previously seen during a similar, strife ridden period in Lebanon's history.

UN suspects Syrian rebels were the ones who actually used chemical weapons.

Come on, Obama. These glorious freedom fighters have crossed your red line. What are you going to do, continue supplying them?

This Zionist blatant attack on Syria also creates a dilemma for Iran. If Iran does nothing, then it will look pitiful in the Arab/Muslim world as the dreaded Zionists humiliated them after the last strikes even killed a Sepah general. I doubt it that Iranian mullahs will do anything but speak with a forked tongue as usual as their only interest is to hang on to power. Arabs will continue killing each other and the only logical option for Iran is to untangle itself from the Arab/Syrian mess and let the Takfiris take over. The Arabs are used to humiliation and are dragging Iran along with them, thanks to the mullahs. I can bet that once the emboldened Salafi/Takfiris control Syria their next target would be Jordan and the Zionists themselves.

the Syrians have indeed meddled endlessly in Lebanese affairs and are the authors of many, many murders of Lebanese politicians and civilians.

indeed the Arabs are used to dragging the Iranians around. Had this not been so, there would not be any Iranian Ayatollahs at all.

Yes for any Iranian nationalist it is a disgrace to see a large important country with a glorious 3000 year old history and illustrious civilization being dragged by a bunch of Arab clone retarded mullahs who have no sense of honor and now relegated to hollow pan-Islamic bombasts. Iran has sunk so low under the mullahs that it has to send its "Foreign Minister" the cretin Salehi to Jordan, a tiny pip-squeak puppet to beg for survival of the mullah regime rather than summoning the Jordanians to Tehran for a warning.

In 1975 after the Arvand Rood dispute which humiliated and forced crazy Saddam to beg for a settlement, he had to go to Algiers to sign Iraq's capitulation and accept Iran's predominant role. Now Iran's fortunes have sunk so low a to send a high-level official to a puppet state like Jordan to explain its position and beg for immunity from US/Zionist impending attacks.

Iran has lost all respect in the world and this is heartbreaking for any rational Iranian. These cursed mullahs are a global shame and must be thrown out and replaced with a real democratic nationalist government that cuts all humiliating entanglements with shameless Arabs and only promotes Iranian interests. These Arab savages have been killing each other since the dark days of Mohammed and will continue to do so till eternity. As the architect of al-Saud Wahabbism, the British homosexual Major T.E. Lawrence stated accurately, that the Arabs are barbaric and petty tribal savages who can be manipulated like children.

According to Zionist media they tested a new stand-off weapon on Syria:

Israel is alleged to have tested a new air-to-ground missile, the Spice-2000, and to have conducted the raids from "stand-off" distance over Lebanese air space and Occupied Golan heights where they retain a powerful ELINT elctronic jamming station on Mount Hermon. Analysts claim that this served both to protect the Israeli warplanes from the Syrian anti-aircraft defenses and to send a message to Iran about the Israeli capabilities.

If the nuclear negotiations with Iran, which are expected to take place after the election, fail most analysts believe that the US will attack the Islamic Republic. Israel has sought to draw the US into a war with Iran through its repeated strikes on Syria, the possibility of this happening must surely have crossed the minds of Israeli policy makers who authorized the operation. A lack of Syrian and Iranian retaliation only confirmed the Israeli view that Iran's nuclear infrastructure can be destroyed at no cost as US will now be further emboldened as an Israeli partner. A joint operation against Iran is now a certainty.