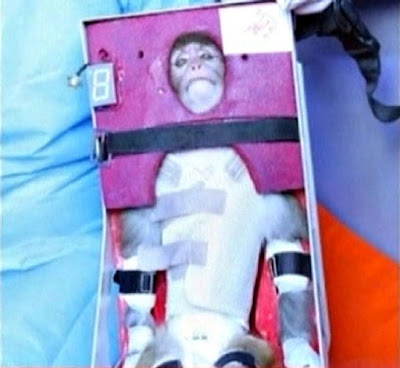 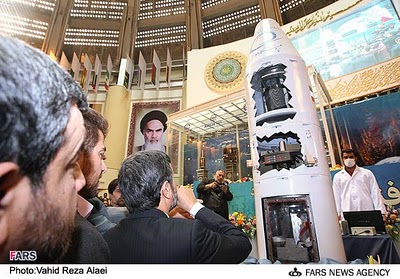 Iran has successfully launched a live monkey into space, Fars News Agency reported today. The monkey was launched into space on a Kavoshgar (Explorer) rocket. The rocket reached a height of more than 120 kilometers and “returned its shipment intact.” (Fars News Agency, 28 January)
Photos:
Top: A still image from a video footage released on 28 January by Iran's state-run Press TV, showing a monkey that was launched into space. (Press TV)
Bottom: Kavoshgar-4 payload section cutaway displayed in February 2011. (Fars News Agency)
Posted by Nader Uskowi at 8:26 AM

No they are sending him !

No, infact we've been searching for Maymoon-nejad and he's nowhere to be found...wait...! LOL

Good Job. It is amazing to see how Iranian Engineers and scientists accomplish given all difficulties they see from both inside and outside forces.

It's just amazing, these people continue to accomplish these feats while being subjected to an intense economic war by the West (sanctions). Just think how the country would take off, economically, if the United States leadership possessed the political courage to reach out to the Islamic Republic with a Nixon-to-China moment.

I feel so sorry for that poor little monkey.
They should send one of their goons to sub orbital flight.

Mark. Hold your breath for a moment.
The launch has not been confirmed by any independent source yet.
Secondly (and you should know this better than anyone) where is the evidence (Films) as you know the IRI is very quick to broadcast these moments.
We shall wait for the actual film sequence to be able to confirm this story.
Remember your jubilant cheers when the IRI announced that they have built the first UAV which could take off vertically.
As I recall after it was proved to be a fake story, you defended the IRI that all countries exaggerate about their achievements.
I wonder what you would say this time if there is no proof? That the Americans never went to the moon? !

nothin to do with this ape.
iran launched a rocket with a payload in to space, trhe payload returned and not damaged, means if a nuk warhead is launched it eill not damaged by return heat.

No need to send a living being for that kind of research. There are better ways. Even Many experts in West believe there is a genuine space-and manned-space development associated with Iran's program as evidenced by methods and lunches so far...

Is that a photo of Zionist puppet Ban-ki-Moon on the Moon?

So did the monkey came back alive or dead? "Intact" doesn't really say much.

Does the monkey have dual citizenship?

The monkey is alive and happy and will soon apply for the UN Secretary General position to keep it all in the family. Will perhaps do a better job anyway.

I am wondering if the poor monkey agreed to this mission and more importantly did it want to come back to earth?

See IRAN's video of sending a live monkey into space.

It wanted to come back to earth but not to Iran.It is rumored he applied for US citizenship.

It's only a Fateh missile without its explosive warhead,with a modified cone and return parachute.The poor monkey was put into that tight space and fired at a ninety degree angle.
This cheap stunt was an obvious propaganda exercise.

Yeah and he can take his close friends the Islamic leadership with him to their new home,the New york state zoo.

Iran doesn't recognize or respect claims of dual citizenship. If you're an Iranian monkey than you're allowed only to be mistreated by the Iranian theocrats and no one else.

Lets send all those "nay sayers" to the Moon to establish their new kingdom.


P.S. Do not use my words in any plagiarisms.

As i understand it, you are not permitted by Iranian law to discard your Iranian citizenship. I think it can be done in most civilized countries where one is allowed to go through the process of naturalization which means that one relinquishes their nationality. One has the right to write off his/her citizenship, in most of the free world. But Iran is surely not one of them as the theocratical clerics literally see human beings that have been born inside the country as property of the State and thus can be stripped of whatever little rights they had, and be subjected to anything and everything -- it's all very medieval. What i don't know, but i would be curious to know, is whether or not an Iranian person who was born outside of Iran can renounce his Iranian citizenship after it has been applied for and aquired?

It's not the renouncing of Iranian citizenship which is the problem but the renouncing of the Islamic faith which carries the death sentence that is.
They even question you if you choose a non Islamic name for your new born child.
They think they own you and do as they please with you if they think their dear Islam is under threat.
These people are the true satanists who pretend to act on behalf of god.

That poor little monkey kind of reminds me the situation of the Iranian people, how it's tightly restrained in a small space and just about allowed to breath.

this is nothing Guys! i hear the UAE is building its own spacecraft with some technical help from Saudi Arabia to send a live camel to the moon! the whole project is sponsored by the west to reward he two gulf kingdoms for good human rights records and the hearty friendship and partnership with the west!!.

Torture of Monkey in G-force machine.