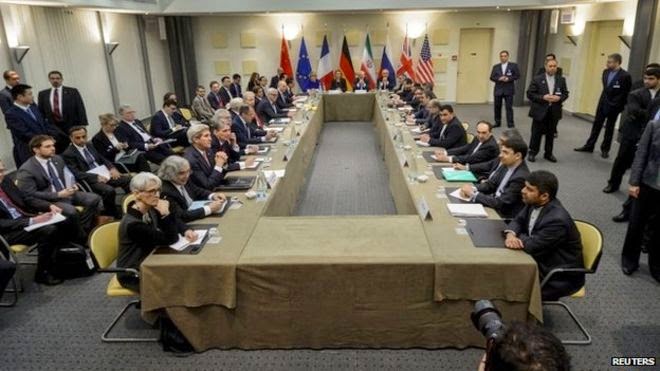 Reports from Lausanne indicate that the crucial round of nuclear talks are going down to proverbial wire. Diplomats speaking to reporters say “some quite important gaps” still remain. Two apparently main disputes continues to be the sequence of lifting of sanctions, and what kind of nuclear R&D Iran can still pursue. The issue of disposal of Iran’s current stockpile of enriched uranium has also not been resolved yet. Iran said on Sunday that it will not ship out the stockpile to Russia, as has been suggested in the past as a viable solution.

With the self-imposed deadline of 31 March looming, the foreign ministers of Iran and the six major powers today held their first plenary session since the talks were extended last November. No breakthrough was reported. Russian Foreign Minister Sergey Lavrov will leave for Moscow later this afternoon to attend a state function. Sources tell reporters that Lavrov will return to Lausanne on Tuesday “if needed.”

As Russian deputy foreign minister told reporters today, all parties have the intention to reach a deal. But they need to make tough decisions by tomorrow.

Agence France Presse
Lausanne: The United States will have to take a "hard look" at its options if a looming deadline to reach a nuclear deal with Iran is missed, a senior US official said Monday.

"I don't want to predict what the outcome will be," acting State Department spokeswoman Marie Harf said, asked what would happen if there is no agreement on the broad outlines of a deal by a Tuesday midnight deadline.