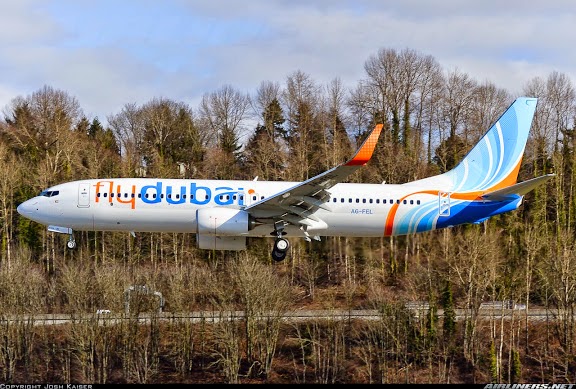 A UAE commercial aircraft, Flydubai, chartered by U.S. forces in Afghanistan for a flight to Dubai, carrying 110 American citizens and 30 other passengers and crew, was diverted to land in Bandar Abbas, Iran on Friday, reportedly because of a mix-up over its flight plan. The plane was flying from Bagram airfield north of Kabul to Dubai. The normal flight path goes through Iranian airspace. (AP, 5 September)
An American official told AP that the Iranians radioed the plane's crew to say they did not have the proper paperwork and to return to Bagram. The pilots said they did not have enough fuel to return so the Iranian authorities told them to land in Bandar Abbas. It was not immediately clear why the plane could not go to Dubai if it could have returned to Bagram.
A senior State Department official said the issue appeared to have been resolved after the plane landed at Bandar Abbas and officials believed the plane would be cleared to resume its journey.

UPDATE: Flydubai announced that the plane was permitted to leave Bandar Abbas at 03:15 AM Saturday local time (6:45 pm Friday EST) and was en route to Dubai.

Expired flight plan due to 3 hr delay at Bagram.

Had IRIAF been ordered to intercept, likely 91st TFS scrambled from TAB.9.

Correct me if i'm wrong, but if memory serves me right, a great majority of Iran's F-14s always operated out of coastal airbases such as Bushehr and Chahbahar, and a small number of them operated a bit inland, from Shiraz and Esfahan respectively. So presumably an F-14 would have carried out the kind of mission you speak of. Also according to open source information ex-Iraqi Mirage F1s (specialized for anti-ship strikes) are housed in Mashad airbase as of now. My personal experience tells me that the proper use of those F1s would be to have them deployed in the airbases at the Persian gulf. What is the reasoning behind their deployment in Mashad, do you know? Is IRIAF not using them in the anti-shipping role?