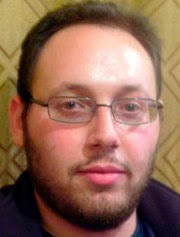 The Islamic State has beheaded American journalist Steven J. Sotloff, 31, and posted a video of it on the Internet. The late Steven Sotloff was a freelance journalist who was captured in northern Syria a year ago.

“The family knows of this horrific tragedy and is grieving privately,” the Sotloff’s family members said in a statement. (The New York Times, 2 September)

CENTCOM said the strike destroyed 16 ISIL armed vehicles. The Command has now conducted a total of 124 airstrikes across Iraq.

The White House also announced that the president has authorized deployment of 405 additional U.S. troops to Iraq, bringing the total of U.S. forces authorized there to more than 1,000. (The Hill)

another Anti-Islamic killing by a people wishing to convince the world that Islamic rule is the best alternative and solution to the all problems brought about by man made LAWS !.

And when the Prophet Muhammad and Imam Ali were slaughtering people -- was that Arab savagery, too?

Politically correct and supportive comments of authors at 1:04 and 8:35 PM....

WHY the Prophet [s.a.w.w] waged wars -the difference b/tween Islam and terrorism -

-Indeed the mercy upon mankind waged wars and subdued people ,and yet he was a blessing to the world. here is a quick look upon HIS character and conduct -from here we shall see THE human face of those wars >

ONE-
Raised as an orphan ,and brought up in a humble community ,The message of Islam was a threat to the rulers of the day,and they plotted to eliminate him.Arabs being one of the most intolerant people among the human race ,saw a threat from the holy message brought by the Prophet .And the message was -worship your Lord ,the one and only true,have mercy upon the orphan,give alms to the poor,treat the wayfarer well,do not oppress the lowly, abolish slavery,stop the caste system,all men are equal the best among them is the one who has piety, do not kill baby girls[a custom among Arabs then, killing first born girl babies.] and so on.
But the rulers smelt a revolution and losing power, so they would pour cattle and camel dung on his head as the Prophet bowed for prayers.They killed His followers by roping their legs and then have two camels pull in opposite direction till the victim is ripped apart.They exposed him to the most inhuman and barbaric episodes.BUT He always cooled His heart and never took revenge .so then tolerance and reason are the first virtues of the Prophet.

TWO-
One day the Prophet [saww] went to TAIF a village away from Mecca to preach the message of Islam.He had no sword or weapon, yet the people there would not even listen to him, instead commanded young boys to stone him.They stoned Him till He bled.Now being a Holy Prophet an option was given to him from the Almighty through an angel that if he wished a fierce punishment to befall the city ,-this was His reply-"leave them alone,they know not what they are doing,even if they reject the message,their progeny will maybe accept the message in the future."-SO the Prophet HERE taught forgiveness and loving your enemy.

THREE-
Now when life was tough amid the suffocating red tape and suffering,HE went to Medina to seek peace .But His tormentors would not leave Him alone. Teamed up with a section of the society there to make life tough again,while rallying support among the other Arab tribes to impose an embargo and ultimately Finnish HIM COMPLETELY.NOW this is when JIHAD became an option.He was given the permission to fight and he did fight as a last resort and in self defense.

so then Islam warrants Muslims to fight only those who rise their weapon to Muslims AS A LAST RESORT OR IN SELF DEFENSE,otherwise terrorism is not ISLAM.